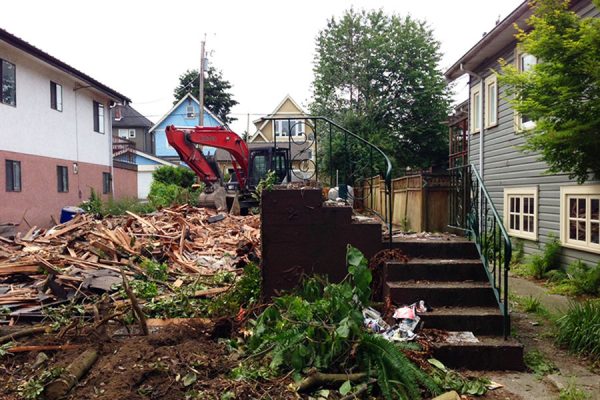 An Affordability Bank, after downzoning new single-family residence lots, would encourage preserving, rather than demolishing, character homes — and converting some into multi-family units. Photo by David Beers.

Vancouver needs an Affordability Bank. Here’s what that would be:

A new policy that allows people choosing to build new single-family residences to pay a premium in order to be “over-housed” — that money collected and saved by the city to be spent later on affordable housing projects.

The idea of an Affordability Bank begins by acknowledging that large new houses on large lots come at a societal cost. Over-housing is not good for a climate-challenged world. Therefore, if new owners want this, they must pay handsomely to live their values.

The next step to making the Affordability Bank work will sound counterintuitive. Instead of upzoning all of Vancouver for more density (as many have called for), the city would downzone all existing lots zoned for single-family residences. The term for single-family residence zoning, in planner parlance, is RS. Another important planning concept is “fsr,” which means floor space ratio, or the amount of approvable floor area in relation to the total area of the site.

Right now, RS lots typically allow 0.6 fsr, which means 60 per cent of the lot area can be built. When the city implements an Affordability Bank, it could set the maximum fsr at 0.4. The new house must take up only 40 per cent of its lot size.

If new owners really want to be over-housed, they could purchase an additional 0.2 fsr from the Affordability Bank at handsome rates. For that price, they might add hundreds of square feet more to their newly built home on the same lot, while it houses, still, just one family. The proceeds from this purchase of extra floor space would be deposited on behalf of taxpayers, and accrue, until the city is ready to develop housing projects on city-owned land.

Let’s go further. Single-family property owners, or developers looking to grow the so-called “missing middle” market towards more affordable multi-family housing, can go to the bank and purchase additional density up to 1.1 fsr towards creating projects that max out at 1.5 fsr. These projects must deliver more affordable strategies. This would generate the potential for a variety of alternate housing forms, without land assembly, including fee-simple row housing that is liveable, contextual, compatible and neighbourly with single-family adjacencies.

Through an initial pilot programme, the city could fine tune the economics of such a programme so that fsr purchased from the Affordability Bank, including the prospect of free fsr, facilitates new multi-family capacities at a range of affordable rates.

The city could sweeten the pot by relaxing requirements for on-site car sharing and underground parking for these mini-housing communities. The fact the land is pre-owned (so no spike in cost when purchased by a developer) further improves the economics for people wanting to do this kind of development on their land.

This approach would please those wanting to protect Vancouver’s character homes. It would also curtail the practice of demolishing relatively new houses into the landfill as a new, smaller, 0.4 house would only be possible in its place. Further, this approach could increase the retention of older character houses noting that these houses could be creatively adapted, and integrated, into larger multi-family projects up to 1.5 fsr.

One way to think about the Affordability Bank, and the policies to make it work, is that it enables a sliding rate scale for the sale of density. Which in turn encourages multiple approaches to creating housing that is affordable to rent or buy. It could provide market certainty and stabilize land values.

So far, you may have noticed, we’ve only been talking about how new owners of single-family residence zoned houses would be affected. What happens to homeowners who have already maxed out their 0.6 fsr as single-family residences as currently zoned? Nothing. If we establish an Affordability Bank, we can grandfather in all existing single-family housing, secondary suites and laneways with the intention of not altering property values. Assessments could reflect existing conditions, not unrealized development potential, so that everyone only pays for what they have. More intensively developed small lots will generate more tax revenue for city services.

To sum up, an Affordability Bank is a way to accommodate people to be over-housed in a market where too many people are under-housed, but they must pay a premium to do so.

It allows some people, with the means, to live their big house dream in Vancouver, while creating incentives to keep character homes and convert existing homes into creative multi-family housing. And it enables a lot of development decisions to be in the hands of people with connections to neighbourhoods, rather than big developers. It also generates property tax potential without land assembly.

Vancouver’s city council has ordered staff to study the potential of imposing a land tax. Perhaps they should take a close look at an Affordability Bank.

This story originally appeared on The Tyee.