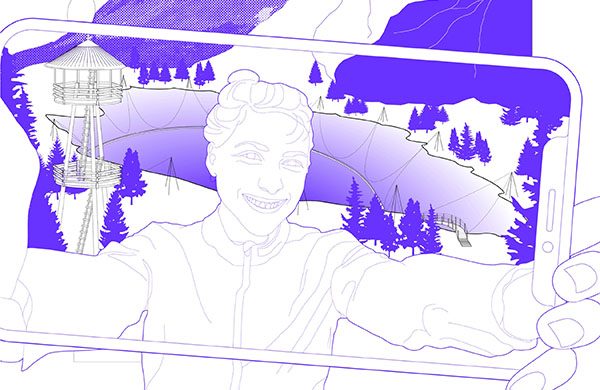 On a hike to Upper Joffre Lake near Pemberton this summer, I saw a dozen people frozen in the same pose. In one hand, they held out crumbs. In the other, they held smartphones, waiting for the moment a whisky jack would fly down for a nibble so that they could document themselves playing Snow White.

In a decade, visits to Canada’s national parks have jumped from 11.9 million to 15.9 million, a 34-per-cent increase.

The addictive photo-sharing platform was launched in 2010 and acquired by Facebook in 2012 for $1 billion. In 2018, it surpassed one billion active users, becoming the sixth social medium to do so.

In that time, it’s dramatically changed how people plan, document and share experiences. Shots of nature in particular — along with pictures of food, fashion and loved ones — are irresistible fodder for likes.

Tory Michak, who graduated from the University of British Columbia with a master’s in landscape architecture this year, wrote her thesis on Instagram and the wilderness.

A climber and trail runner, Michak had wondered: “When we seek out nature for play or relief, are we bringing with us the very thing we are trying to escape from?”

Though she notes that, paradoxically, “Instagram inspires many of us to seek out an outdoor adventure in the first place.”

For a pre-Instagram explanation of our habits of documentation, Michak turned to Susan Sontag’s famous series of essays published in the 1977 book On Photography. Sontag wrote that photography has become a “principal device for experiencing something.”

“With Instagram, the photo has come to represent the experience more and more,” said Michak.

Michak found research, though not on Instagram specifically, that shows using electronic devices in green settings significantly decreases the mental benefits of exposure to nature.

But she also found research that shows photography improves what people are able to remember from their visual surroundings.

This is just one of many tricky questions around Instagram and the wilderness, such as whether there’s a proper way to experience the wilderness, or whether it’s good or bad that Instagram is uncovering hidden gems, such as the Colorado River’s Horseshoe Bend, for people to visit.

“The negatives can be very obvious,” said Michak.

The influx of new visitors has tested the ability of parks to accommodate their numbers. Many North American parks now have long lines for entry and washrooms, and crowded and noisy trails.

Not everyone is familiar with conduct like “leave no trace.” At Joffre Lakes, there has been trouble with illegal parking due to overflow at the designated lot.

Extra aggressive visitors, bolstered by the mantra of “doing it for the ‘Gram,” have trespassed through, and as a result damaged, ecological areas.

An Instagram account called @trailfails collects visual evidence of these violations, such as posers dangling from Joshua trees or a crowd in Vermont chasing a moose for photos, only to cause it to drown in a lake.

Digital tools might be new, but Michak believes these are old habits.

She points to the ideas of environmental scholar Neil Evernden, who said that people “objectify the environment and convert it into a thing of only measurable value.”

Our forays into the wilderness are as much about exploring ourselves as they are about the outdoors. What we’re often doing is using the wilderness to “sculpt” ourselves, he wrote.

“It has been a reason to walk or hike ever since Thoreau declared that he was ‘yearning for the wild,’” Michak wrote in her thesis. “Today, for all our talk of exploring, there are actually few areas left to be explored… [and few] experiences not already pictured on Instagram.”

Many of those experiences are also visually rendered in the same way: the same moody palettes and seemingly candid expressions, the same magazine-like poses. Even Crown corporation Destination BC, which has over 471,000 Instagram followers, encourages these dramatic images, calling them “on brand” for the province.

The controversies around documenting nature and the effects of that documentation aren’t new, though Instagram’s billion-strong user base means those effects are amplified.

Documentation often “defines what wilderness is for us, what we value and don’t value,” said Michak.

She points to the work of Ansel Adams. Though beloved, Adams, the photographer of American landscapes who began making pictures in the 1920s, had his share of critics.

His romantic black-and-white images inspired conservation efforts, but he was also accused of idealizing a pristine wilderness untouched by humans, erasing, for example, the Ahwahnechee people who lived in Yosemite when he photographed the valley.

Landscape photographers like Adams tend to focus on the grandeur and mystique of wilderness, and are often people with the ability, time and cultural background to venture outdoors. People who associate the wilderness with labour may not see the appeal.

As Michak examined Instagram’s place in the history of wilderness photography, she did notice one big difference: today’s images feature a majority of women.

“Representation is one of the great positives,” she said.

Women were welcomed and represented in the early days of nature walking and hiking clubs, she found. But they were often pushed to the margins as exploration, climbing and hiking were seen as male pursuits.

“There’s a socially negative view of posting a selfie on social media, but it can be an act of activism saying, ‘I was in here! I was in this place where woman traditionally have not been accepted or encouraged to go,’” she said.

Michak believes more can be done to anticipate and deal with the flood of media-minded visitors.

“In landscape architecture, it isn’t something explored often, even though we’re often designing sites to be used for taking photos to be posted eventually on Instagram,” she said. (See Instagram traps.)

One of Michak’s case studies is the Grand Canyon’s Mather Point Visitor Center, which a firm redesigned in 2016 with the criteria of managing the tricky balance of accommodating more visitors without enlarging the ecological footprint.

While there has been research on Instagram with regard to travel, education and museums, there isn’t much on the platform’s effect on the environment.

Though what Michak found during her research on Instagram and the wilderness is consistent with how the social medium is being used elsewhere.

“If anything, it appears that we are spending much more time ‘sculpting the self.’”

You can read Tory Michak’s thesis “Be Here Now : Instagram and the Feminization of Wilderness” in its entirety here.