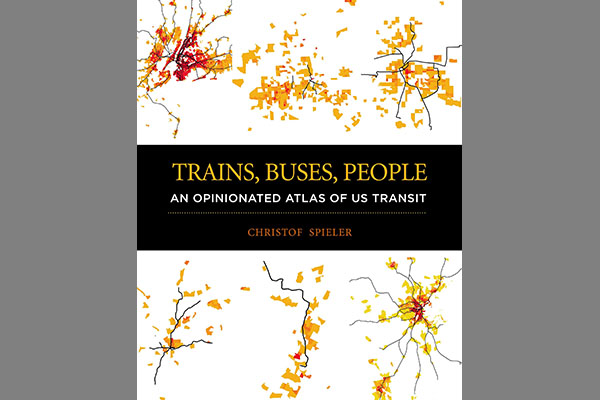 Christof Spieler’s Trains, Buses, People – An Opinionated Atlas of US Transit is a refreshing look at transit development in the United States.  The atlas presents a frank discussion of the histories and decisions that shaped the way many transit systems are today. Spieler begins with an introductory review of the basics of transit design to bring the reader up to speed, which is great for providing context to the (opinionated) analysis to come. For real transit nerds, the atlas includes all manner of wonderful transit ridership and frequency numbers. Still, there are also lots of history nuggets and quick takeaways for those just looking for a cursory understanding.

Trains, Buses, People details 47 cities in the US that have some form of rail transit or BRT organized from highest population (New York, NY, 23 million) to lowest population (Fort Collins, CO, 324,000). The atlas also includes several examples of cities that are building their first mass transit system (Honolulu, El Paso, Oklahoma City) to show that transit is still evolving in the US.

Each city includes a discussion, profiles of its major lines with statistics, and a map. Each map, in turn, overlays the current rapid transit network with significant employment areas and population density. These are very helpful as Spieler points out how certain transit lines managed to avoid major population centres and destinations.

The histories are fascinating for cities like New York where transit has been continuously evolving since its first horse-drawn streetcar line opened in 1832. Early in New York’s transit history, private companies intentionally built competing systems with parallel routes and no overlap. Like the fire brigades in Gangs of New York, there was fierce competition for ridership and no collaboration. Today, New York has discontinued more lines than exist in other US cities while remaining the country’s most dense transit system.

The atlas also gives good examples of common transit challenges, like the balance of commuter rail versus downtown lines, and the lure of easy right-of-ways. Many of the US’s largest transit systems were designed for commuter service, but bypass denser inner-city neighbourhoods (San Francisco, Boston, and Dallas). Long right-of-ways can be hard to create, so some transit authorities have used preexisting routes used previously for transmission lines, highways or other uses where space was available. This method, as Spieler points out multiple times, creates expensive infrastructure that is doomed to fail due to low ridership. Amtrak’s heavy commuter rail line from Baltimore to Washington DC is a prime example that follows a freeway corridor and serves no destinations besides its endpoints.  As a result, it is one of the poorest performing rail lines in the US.

Most of Spieler’s criticism of the transit systems profiled have to do with the inherent inequity that they create by being bad transit systems. Poor performing rail lines don’t just make it difficult to get around but can have a limiting effect on a city’s economy.  Poor transit service can trap a community as a commuter suburb or not attract economic investment at all. Conversely, a well-planned rail system can be a boon to residents and the economy alike, the careful intersection of downtown and commuter rails lines in places like Chicago can keep the city moving seamlessly. Other hopeful examples include Los Angeles, where long-dead streetcar lines have been revived as rapid bus lines and even back to light rail in some cases. Los Angeles has recently started to reinvest in transit as the city has become notorious for its massive traffic jams.

Trains, Buses, People – An Opinionated Atlas of US Transit includes examples of successful and unsuccessful systems while offering insightful commentary as to why these systems are the way they are. Transit lines are a reflection of their community and its political will to build certain types of systems.  Some communities value transit more than others, while some value quirky, unlikely systems that seem to be quite successful (Peoplemover, Miami FL). Overall, Spieler’s atlas gives those looking for transit lessons a lot to chew on, while providing the rest of us a fascinating window into the US’s major transit cities.

For more information on Trains, Buses, People – An Opinionated Atlas of US Transit, visit the Island Press website.