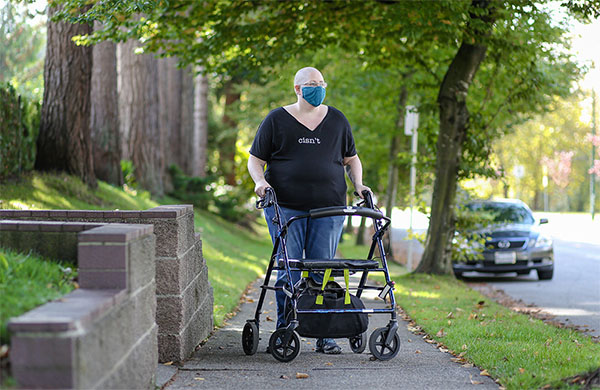 ‘When we are required to have a little bit more space, it’s so much more difficult getting around,’ says accessibility consultant Heather McCain of pandemic sidewalks. Photo by Christopher Cheung.

“It feels like there are more people in the world!”

The Lonsdale shopping strip in North Vancouver feels different to Amy Amantea, who lives with sight loss. People are more spaced out due to physical distancing, and sometimes she walks into an unfamiliar outdoor patio that a restaurant has set up for pandemic dining.

Even though she has a cane — and even though we all now live in a two-metre world — not everyone gives her the space she needs.

“I have to touch everything,” said Amantea, who only leaves home for essential trips. “People with sight loss use our hands to see and explore our environments. I’m very conscious about having my hand sanitizer close by.”

Everyone is experiencing public space in new ways due to the COVID-19 pandemic. And by now we all — from Downtown Eastside residents, to people with disabilities, to parents — understand in different ways the pain of inadequate sidewalks.

Perhaps you’ve had a hard time walking around someone, or you haven’t had enough time to dodge a pedestrian heading into your two-metre bubble.

If you’re able-bodied, you might have stepped off the curb, squeezed between parked cars, looked for traffic and ducked onto the road before hopping back onto the sidewalk — not an option for everyone.

This is arguably the biggest weakness of many sidewalks today: there simply isn’t enough room.

Health leaders like provincial health officer Dr. Bonnie Henry have called for two-metre distancing and encouraged people to spend time outside for physical and mental health. With so much anxiety, “it’s important for us to get out [and] experience the fresh air,” she said.

But the extra traffic from pandemic sidewalk users has shown how quickly our cities max out on space.

“It shows in Vancouver how we are used to being constrained,” said Heather McCain, an accessibility consultant. “When we are required to have a little bit more space, it’s so much more difficult getting around.”

In cities where vehicle traffic gets the most room on the street, sidewalks have always been “competitive” spaces for users, said McCain. Strollers, skateboards, and mobility devices are all part of the mix, with the occasional bench or sandwich board thrown in.

One busy Vancouver neighbourhood has gotten even more crowded with the pandemic.

In the Downtown Eastside, locals leaning against buildings chatting, vendors selling appliances and knickknacks, and people towing carts with everything they own were always common sidewalk sights. The pandemic has meant even more people are crowding the area’s sidewalks.

It’s caused trouble for Canada Post, which had temporarily stopped delivery to parts of the neighbourhood, saying it’s impossible for carriers to physically distance during their rounds.

In this area especially, sidewalks and street design are a matter of life and death.

“One of my friends fell off the curb in front of a bus and he later died,” said Houle Grant, who lives in the neighbourhood. “His name was Fernando.”

Seven years ago, a new crosswalk, a new stoplight, and slower speed limits were introduced to East Hastings Street. The city had the accessibility of jaywalkers in mind, especially those who might have challenges with addictions or mental health. However, collisions with vehicles are still common.

Houle’s partner Erica Grant lives in a single-room occupancy. Like many others in the neighbourhood, she doesn’t have much room in her home. The sidewalks, she says, “are like our living room.”

This is another point of competition: balancing the flow of people with sidewalk activities.

Engineers defined sidewalks as a way to offer safe and smooth passage for people from A to B — nothing more. Everything else from panhandlers to produce stands was considered a hindrance.

However, urban thinkers like Jane Jacobs and urban designers like Jan Gehl highlighted the special role of sidewalks for chatting, mingling, people watching, and building neighbourhood safety and trust.

Flow might be a big worry for pandemic sidewalks, but in the Downtown Eastside their broader role can’t be ignored.

As Erica said, many people don’t have living rooms, and so the sidewalk plays that role.

It’s also the site of many workplaces. The jobs that some residents do — as sex workers, survival vendors, sellers of recyclables, and others — are often done outdoors. Not everyone has the luxury of Zoom meetings. As a result, there are more people on the sidewalks here around the clock than anywhere else in Vancouver.

“Being outside is a necessity for so many to put food on the table,” said Blomley. “People who are securely housed don’t always see that. They tend to see things that look ‘out of place’… and see it as a threat or criminality.”

The Grants once purchased an electric fan from a vendor on the street. Among common products like DVDs and canned goods are rarer items like snare drums and waterbeds. Despite how common vendors are here, they are still at risk of bylaw enforcement.

Due to COVID-19, many of the indoor spots where residents would sit, chat, enjoy a meal or play a game of cards are not open. Visitors are banned from some residential buildings and some shelters have closed. This all adds more people to the sidewalk.

“It’s so important for people to have the ability to be with others and not be isolated,” said Fiona York, who works at the Carnegie Community Action Project.

Health officials agree, she said, and that’s why cities like Vancouver have created “pop-up plazas” and allowed restaurants to build new patios so that gatherings can continue along with the distancing.

But in the Downtown Eastside, there’s been less space for people to enjoy, not more. The locals, as always, try to find space where they can. At the Carnegie Centre, where York works, the curved and covered front steps are always full, she says.

The sidewalks also play an informational role. Not everyone who lives here has internet access or a mobile phone.

With the overdose crisis, not seeing someone who is regularly on the sidewalk is a sign they might need to be checked on.

With the pandemic, word of mouth, posters, and even graffiti on sidewalks were key to educating residents about COVID-19.

“Please stop touching yo face!!” one artist sprayed onto a wall. “It may seem surreal, but it’s not. Love to all.”

So, what has COVID-19 highlighted about improving sidewalks? For one, they can be wider, and not just because of physical distancing measures.

“It doesn’t help being invited to a space after it’s developed,” she said. “We need to be at the table when the decision-making and planning starts.”

McCain, who has used a power wheelchair for 12 years and now uses a walker, suggests more seating so that people can rest and enjoy longer trips outside. They also pointed to sidewalk surfaces that are fancy rather than functional.

“We need to ensure that usability doesn’t prioritize aesthetics,” they said. “There are seniors who can’t go for a walk because there are decorative bricks and they don’t have the ability to hold onto their walker over uneven pathways.”

McCain is particularly frustrated with Vancouver’s Olympic Village, where there are multiple different surfaces like wood and brick.

“None of them are very conducive to smooth travel with wheeled devices,” they said. “You see people rolling luggage walkers and wheelchairs in the bike lanes because they’re nice and smooth, but this causes problems [for] cyclists. So many of us have said, ‘If they can make it smooth for bike lanes, why can’t they make it smooth for pedestrians?’”

In the Grants’ Downtown Eastside, adding housing and places for people to spend time would help reduce crowding on the sidewalks.

However, Erica says that the sidewalks already have a social quality missing from other parts of the city. She noticed this when Houle once stood outside a Starbucks in another neighbourhood. Someone complained about him being there for too long and asked him to move.

On East Hastings Street, regardless of how you look, there is more acceptance.

“Here,” she said, “the streets are our livelihood.”

Christopher Cheung is a reporter at The Tyee, where this story originally appeared on Oct. 28, 2020.