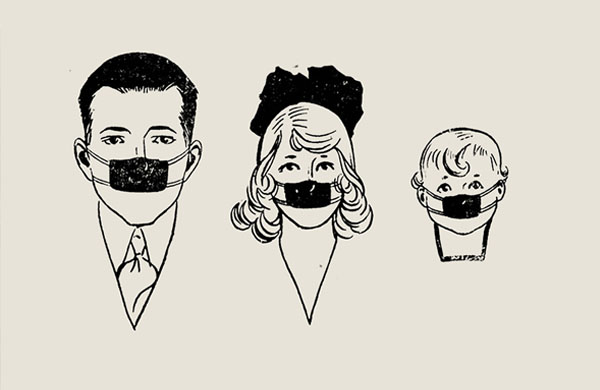 In 1977, historian Margaret Andrews found herself on the hunt for a Vancouver doctor who’d worked during the Spanish flu outbreak.

It had been six decades since the wartime pandemic hit the city, but she managed to find a doctor who was still alive. He was living in a seniors’ home and shared with her his account of the flu’s toll on the local health-care system at a desperate time when emergency nurses were recruited from the community with as little as 30 minutes of training.

“We just worked till we were exhausted,” the doctor told her.

The flu arrived in 1918, with many doctors and nurses still in Europe for service during the First World War. There were only about 200 nurses in Vancouver.

At one point only half of them were available, the rest too busy caring for their families or sick themselves. Doctors had no time to care for their own patients, instead tending to whoever needed urgent care. One man saw five different doctors during his bout of flu.

Andrews published her paper on the topic in BC Studies in 1977, and it remains a key work in a neglected area of research, even though that pandemic affected one-third of the world’s population.

But with new interest in infectious diseases due to COVID-19, Andrews was invited in December to speak at an event held by the Friends of the Vancouver City Archives and compare the Spanish flu in Vancouver with the pandemic today.

On the scarcity of research, Andrews told the audience that it was as if the flu had been “absorbed” in the trauma and death toll of the war. Still, it killed almost as many Canadians.

I wondered: Did Vancouverites of the 1910s do as they were told by health authorities? Did they frantically hoard items, toilet paper, or otherwise?

Here’s what Andrews and other experts had to say about the two pandemics a century apart, and the curiosities of human behaviour that come out in a crisis.

Vancouver was hit hard by the Spanish flu

It spread through the province by rail and steamship travellers. October was also the end of the season for many resource industries, and the flu hit Indigenous peoples such as the Nisga’a and the Kitwanga hard as workers returned home after outbreaks at canneries.

While some cities experienced only a single wave, Vancouver was hit by three. The second and third waves followed in January and March 1919, after which the pandemic subsided. (We’ve already endured a longer pandemic with COVID-19.)

Vancouver then had a population of about 100,000. A conservative estimate of flu cases is 30,000, with 900 deaths. Adults between 20 and 40 and pregnant women were hit the hardest.

There was squabbling between bureaucrats and politicians over the government response, but aid was delivered nonetheless, with schools like King Edward on the west side turned into hospitals and non-profits and service organizations like the Rotary Club stepping in to provide volunteers.

Andrews found that Vancouver’s death rate was the third-highest among North American cities, after Philadelphia and Baltimore. In comparison, Spokane and Seattle were the continent’s lowest.

“I don’t know how one can explain the difference between Vancouver and Seattle,” said Andrews. “I think of Seattle being a twin city in many regards — logging, seaport.”

One researcher believes Vancouver’s death rate might’ve been because the city was a launch point of the Siberian Expeditionary Force into Russia to oppose the Bolshevik Revolution, with Canadian and American soldiers from around the continent gathering in the city around the time of the outbreak.

Andrews hopes future historians will dig into the mystery.

The death rate from the flu was nine times higher in B.C.’s Indigenous population than the general population, with youth and Elders among the victims.

While the 1918 flu killed about one percent of the city’s population, COVID-19 has killed 0.03 percent of residents in the Vancouver Coastal Health region so far.

Today, we’re advised to ‘keep calm’ and physically distance. A century ago, BC followed ‘the three Cs.’

While public health recommendations during the Spanish flu share some similarities with today’s for COVID-19 — “Avoid the Other Fellow’s Breath” and “Be Unsociable for a Change” at the top of the list — they were focused on promoting cleanliness rather than targeting methods of transmission, said Andrews.

The provincial recommendations centred on the three Cs of “clean mouth, clean skin, clean clothes.” People were told to cover their mouths when they coughed and keep windows open for ventilation, and also advised to not let their feet get wet or wear clothes with low necklines.

It was a 19th-century British approach to health, but overall not very effective at countering flu spread.

However, it did help in one type of public space: washrooms. Common towels and cups used in the washrooms were removed, for example, preventing spread.

Vancouver’s chief medical officer also called for public drinking fountains to shoot water in an arc rather than vertically.

And there was special advice for children. Don’t lick another child’s sucker. Don’t play in muddy ditches. Swat flies, because they carry germs. Keep your school desk clean and tidy.

Quarantines are novel to us, but they were once a part of life.

“Almost every adult would’ve been in quarantine [at some point] as a child,” said Andrews, with common diseases like mumps, measles, and chickenpox keeping children at home.

In quarantine, “The home may be fumigated and there may be a placard at your front door. So all this was an experience that they had.”

Vancouverites in the 2020 pandemic marched for Black Lives Matter and solidarity with Sikh farmers. A century ago, people marched for the war effort.

When soldiers returned — “straight from the war fields of Europe,” as the Province reported — the flu did not stop crowds from gathering to welcome them home.

Even as the city banned indoor meetings, outdoor events such as the Victory Loan Drive took place as planned.

Harry Gardiner, the American daredevil known as the Human Fly, showed up to help promote victory loans. In Vancouver, thousands turned up to watch him scale the Hotel Vancouver and later the World Tower (now known as the Sun Tower), which at 82 metres was then the tallest building in the British Empire. Gardiner performed the stunt wearing street clothes and did not use any equipment.

Victoria was also treated to a visit by the Human Fly, who scaled the city’s Union Bank Building to large crowds. It prompted the city’s medical health officer to chide attendees in a public letter.

“Wake up!” he wrote. “Are there still some citizens of Victoria who do not realize that there is an epidemic of influenza raging through the city? Judging from the crowd which gathered in Government and View streets yesterday, one might be led to believe that there were many who knew nothing of the epidemic. Or is it that they know of the epidemic and yet are so selfish that they cannot forego the satisfying of their curiosity to see a foolhardy and useless feat — a man apparently endangering his solitary life — while they, the spectators, we’re doing a much more foolish thing and were endangering the lives of many. They were doing the very thing to increase and prolong the epidemic in our midst.”

Yes, it was a war-related event, but didn’t people fear for their lives?

Andrews’ answer: “Consistency is not necessarily part of human makeup. I think it would be quite possible for a mother to keep her kid home from school but go down to watch the Human Fly climb the Hotel Vancouver,” she said.

On Nov. 7, 1918, there was a false report that the war was over, which drew wild crowds. The real armistice on Nov. 11, of course, also drew the masses.

“Nothing could stop people from celebrating,” said Andrews.

In both pandemics, there was drama over the kids.

Amid COVID-19, provincial health officer Dr. Bonnie Henry has said it’s safe for schooling to continue because transmission in schools is “very unlikely.”

Vancouver’s medical health officer a century ago similarly said that schools were a safe place to keep children under supervision.

“Families were larger,” said Andrews. “And so the mothers would tend to feed the kids and then say go out and play. And there might be four, five, six kids in a family. And so the outdoors was the ‘normal’ place for children… [It was claimed] they would get into muddy ditches and they would be exposed to the virus, and they were much safer in school. Schools had nurses who visited regularly, and there was a school doctor.”

As for the rest of the city, everything except workplaces like offices and factories were closed to discourage indoor spread. Some churches were peeved by the decision but chose to continue meeting outdoors.

While there was no toilet paper war, pharmacists attempted price gouging for camphor.

Camphor was a popular cough remedy at the time, thought to help with the flu based on the rationale that “it smells powerful, it should do some good,” said Andrews.

It caused such public outrage that city council considered buying the drugs and selling them to the public at cost.

“Then of course the pharmacists took the price tag down,” said Andrews.

In nearby Victoria, cinnamon essence and bark were both popular remedies from drug stores.

While there were ads during the 1918 flu for face coverings and some recommendations to wear masks, it wasn’t as heated an issue as it is today, said Andrews.

One ad from Tom the Tailor sold face coverings “made of pure wool with medicated canvas interior.” Wearers “need fear no grippe when you wear one of these,” declared Tom.

While masks were mandatory in Seattle and in Alberta and Saskatchewan, they were not in Vancouver, though the city’s medical health officer did advise people to wear cheesecloth coverings or gauze over their nose and mouth.

However, there isn’t much record of mass mask-wearing in Vancouver, with the exception of the city’s Japanese population. The Province newspaper gave them special credit for being early adopters:

“The sons and daughters of Nippon in large numbers have been appearing in public with gauze veils for some days under the advice of their three Japanese physicians, who have been successfully fighting the epidemic in the Japanese colony. Rooming-house people and store proprietors in ‘Japantown’ are universally wearing the ‘flu’ mask now.”

Andy Yan, the director of Simon Fraser University’s City Program, also joined Andrews’ talk, and dug up some old newspapers from the 1910s.

Even before the 1918 flu, the Vancouver World newspaper had a habit of blaming illness among the city’s Chinese immigrants on their “wages of sin” and the overcrowded conditions in which they “insisted in living.”

This ignores the fact that discrimination left many immigrants few housing options, Yan said, and hints at the drama of property and power that continues to play out in the city today.

Chinatown was called a “reservoir of disease” during the flu, with similar stigma towards the nearby neighbourhood of Strathcona due to its high population of immigrants that also included Italians and Jews. It was similar to the blame of areas of working-class newcomers today.

“There was not the same outrage,” said Atkin.

Medical health officers at the time often went down to bust Chinatown buildings for being unsanitary, including the Chinese hospital itself. Residents began to fear these raids and the subsequent calls for demolition more than the flu itself.

All in all, Vancouver during the Spanish flu looked relatively… normal.

Perusing through the city archives for images of the flu years, you might not even know there was a pandemic.

The flu hit near the end of the war, after four years of toil, and Andrews wonders if it was just accepted as “one more element” of an already tumultuous time.

Christopher Cheung is a reporter at The Tyee, where this story originally appeared on Jan. 8, 2021.