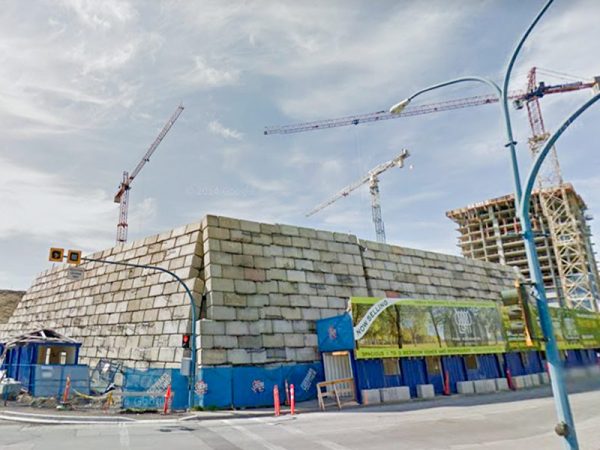 Behold! A ziggurat of Richmond, here one year and gone the next. Image from Google Street View.

They swept away the suburban scenery that once defined much of Richmond and built the ziggurats. Auto shops, blackberry thickets, spas, snooker halls, and even an old Cactus Club were cleared to make way. The structures have sloped walls, are made of giant concrete blocks, and can be over 30 feet tall. Sharing the city with glass condos, their presence has made the downtown into a modern Mesopotamia.

Each ziggurat isn’t around for long. Just a year, give or take. They’re wrapped in real estate ads that promise “Gracious living,” “Marina-side leisure,” “An iconic gateway community.”

No one is about to live in these, though. There are no rooms or grand foyers behind the walls. The ziggurats of ancient Mesopotamia were thought to house the gods. Richmond’s house big old piles of sand.

The sand is a solution to a problem for developers in the city: there is no bedrock near the surface to build on.

“Richmond is unique in the region because it is an island,” said Kees Lokman, an associate professor of landscape architecture at the University of British Columbia.

“It is important to make sure that the base of whatever you’re building has sufficient capacity to hold the development.”

Richmond, which sits mostly on Lulu Island in the delta of the Fraser River, averages one metre above sea level. The question of water is top of mind when it comes to development here; there are 49 kilometres of dikes to protect the city from ocean storm surges, freshet and sea-level rise in the face of climate change.

Richmond does have bedrock, but it’s over 200 metres underground. If you’re looking east of No. 3 Road, which bisects the city from north to south, what you’ll typically find beneath the surface is a half-metre of topsoil, a three-metre layer of clay, then sand and silt below. If you’re looking west of No. 3, you’ll find a seven-metre layer of peat before you hit the clay — the remnants of ancient logs that came down the Fraser and didn’t make it to open water.

Take it from Bruce Mathers, the builder of these Richmond step pyramids.

“Richmond is basically a sponge full of water,” said Mathers, 64. He’s been prepping construction sites in his home city since he was 18.

That sand and silt under Richmond’s surface is loosely packed and holds a lot of water. If an earthquake hits, the shaking will cause those sediments to become like a fluid. They’ll lose their strength and won’t fully support structures, which may lean or settle in response.

And so, if you want to develop property in Richmond, you have to squeeze the sponge.

That’s where the ziggurats come in. The technical term for these structures is a “preload.” Before construction on any Richmond development can begin, an engineer needs to investigate the soil to determine how high and heavy a preload it requires, and how long the preload needs to sit. Then they call companies like Mathers’ — with their fleet of bulldozers, excavators, compactors, and dump trucks — to set it up.

His team uses concrete “lock blocks,” which fit together like 1,900-kilogram pieces of Lego. Sand is unloaded in layers, with a tough plastic mesh called “geogrid” laid on top. The mesh creates tension, so much that “if you get a 10-foot piece of the stuff, dump half a wheelbarrow on it, you can’t even drag it through the sand,” says Mathers.

And then, the ziggurat needs to sit. You might spot a one-inch pipe peeking out at the top. That’s the settlement gauge, and it runs through the entire height of the preload down to a sheet of plywood at the very bottom. Mathers checks on them every two weeks to see how the preload is dropping. Richmond sites can take five to eight months for the groundwater to be squeezed out and the soil to be compressed enough to bear the load of a new building. 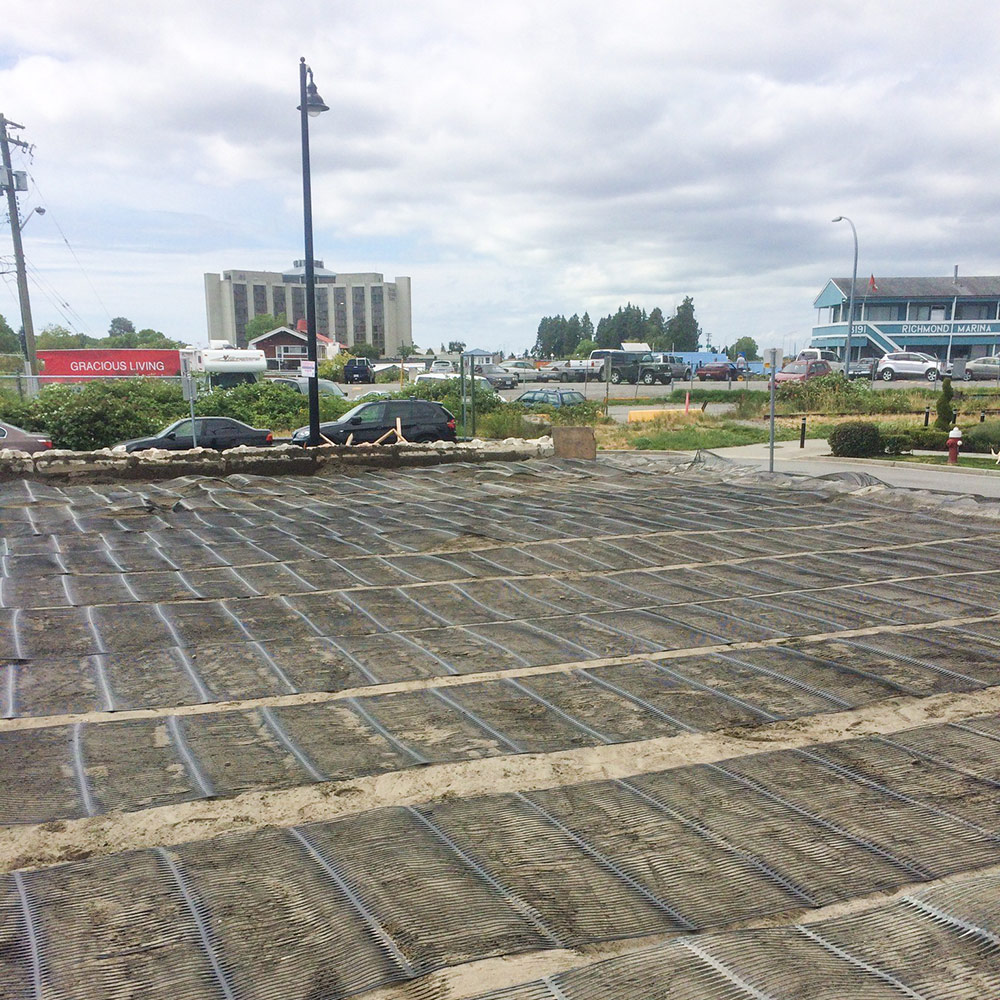 In addition to preloading, most buildings over three storeys have pile foundations — columns driven into the ground to hold up the structure.

If developers didn’t do this work to densify the soil, the building would sink.

There aren’t many other people in Richmond in Mathers’ line of work, and the third generation of the family is now helping out with the company.

It was Bruce Mathers’ father Ernie who founded E. Mathers Bulldozing Co. in 1956. Ernie got his start working with dredging sand from the Fraser River, clearing the channel for boats. The company still uses river sand today for preloading, though it’s no longer free. The Port of Vancouver has since taken up the business of selling it to concrete makers and companies like Mathers’.

In Bruce’s father’s day, the tallest structures in the city were the grandstands at the Lansdowne and Brighouse thoroughbred racetracks. When the 1970s come around, some NIMBY residents were so against the idea of highrises that 150 of them once swarmed a city council meeting and successfully got a project canceled. 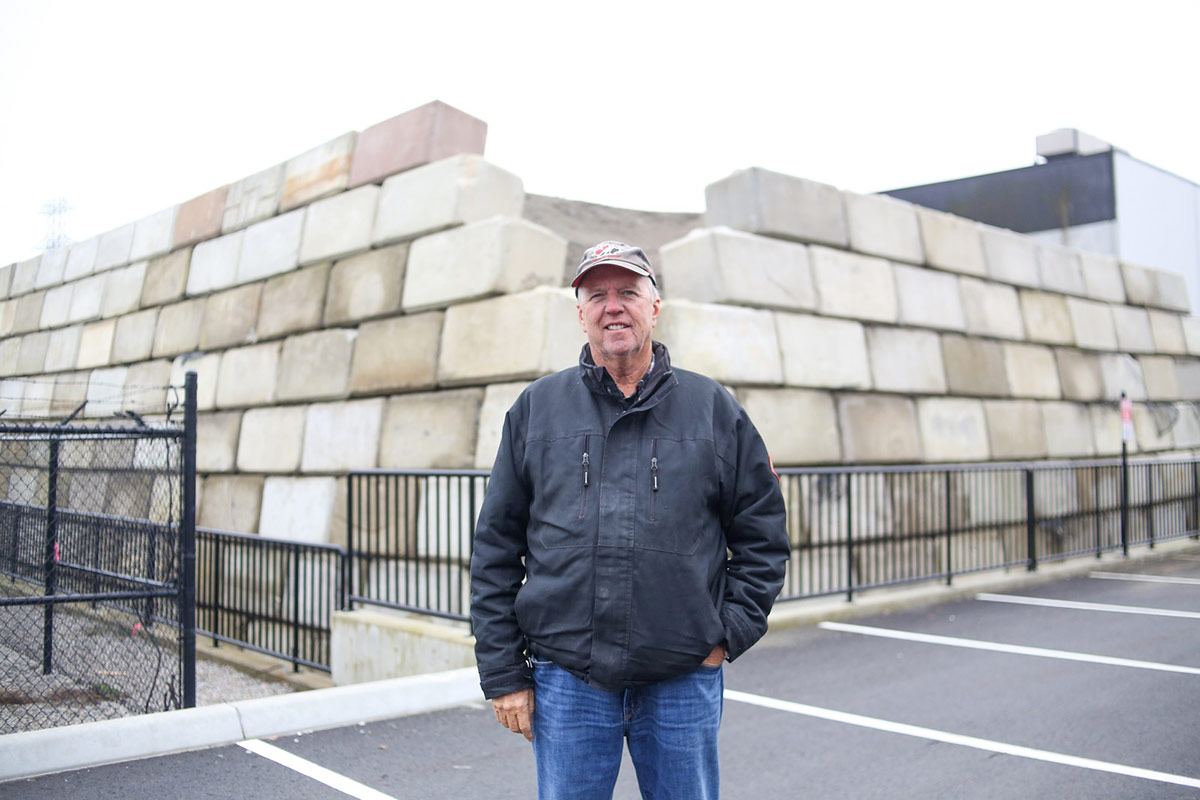 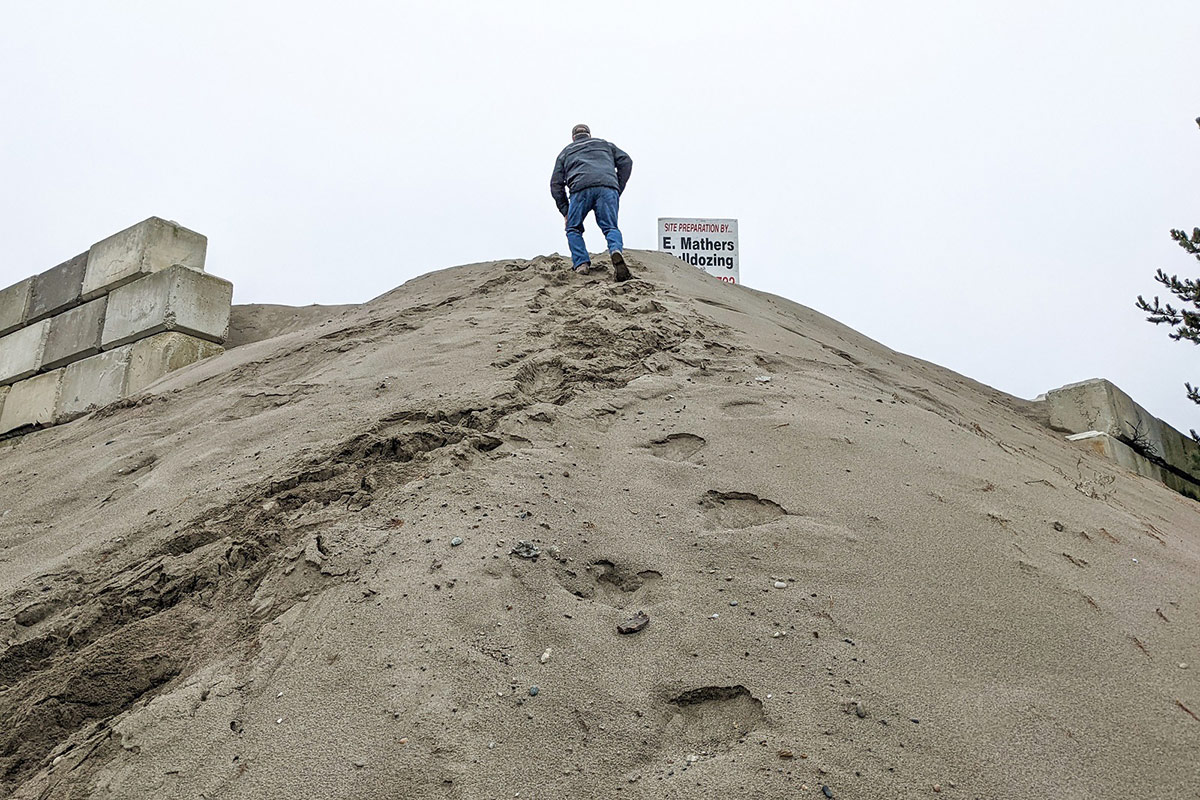 Bruce Mathers has developed a special skill in his 45 years on the job.

On a recent Monday, he was in East Richmond by the river to check out a preload for a seafood company that’s expanding its warehouse. Starting at a corner of the ziggurat where the sand had been allowed to spill out, he shuffled expertly up the slope to the top in his work boots.

Christopher Cheung is a reporter at The Tyee, where this story originally appeared on January 28, 2022.