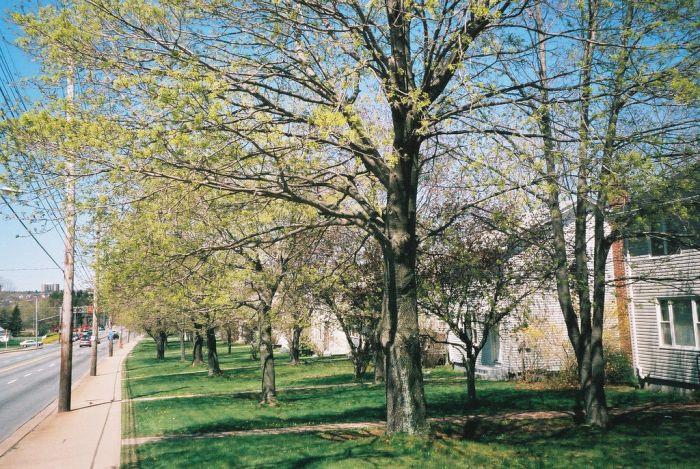 This article is kindly cross-posted from the Halifax Media Co-op. Check out the original here.

HALIFAX – Bedford’s gain will be Bayers Road’s (and the taxpayer’s) pain. And the pain will be considerable.

This was the warning that the HRM Peninsula Community Council provided at a public meeting at City Hall on Monday night.

Councillors Jennifer Watt and Jerry Blumenthal provided an update on a Bayers Road widening project that will cost at least $16 million (a 2009 estimate), not counting the cost of buying homes and properties. This would add at least $5 million, Watts said.

“And construction could be several times that much, given the escalating costs of asphalt and concrete,” she said. The recent Washmill underpass project, originally projected to cost $10 million, came in $8 million over budget.

Watts said that an estimated 90 properties would be affected, in whole or in part.  Homes will be lost and front yards carved up. Three apartment buildings near Connaught Avenue and Bayers Road will be leveled, Blumenthal said.

“It seems that staff are going for a hugely expensive option that will be very negative for the Bayers Road neighbourhoods,” Watts said.

Among citizens speaking at the meeting, local restaurateur David Cheung asked: “Why disrupt and tear up the neighbourhood for a few minutes saved at rush hour? What happens after the rush hour?”

Watts said that this project has long been part of HRM planning despite consistent resident opposition. “Large developments in Bedford West and Bedford South have been based on these new residents using Bayers Road to get downtown,” she said.

And once at Windsor, traffic will then try Gottingen, Agricola and other North End streets “even more aggressively than now to find another way to downtown,” said two North End business representatives.

“This will cost us millions of dollars to make Halifax a highway corridor,” said Blumenthal whose district encompasses the north side of Bayers Road.  He and local residents have opposed this “bad idea” for decades, he said.

Councillor Dawn Sloane, who lived on nearby Connolly Street for 23 years, said the project “is not looking at the quality of life for every person in the neighbourhood.” She said the proposed plan was not submitted to HRM’s Environmental and Sustainability Standing Committee. “It went straight to Transportation (Standing Committee).”

Janet Stevenson said it’s clear that consultants at a 2009 public meeting that opposed the widening “didn’t learn anything and failed to seriously consult with the people affected.  Just because some planner thought it was a good idea in 1994, doesn’t mean we have to stick with it.”

She urged councillors to “work with your residents to see how it can be stopped.”

A Chebucto Road resident said millions were spent on the road widening there and little was accomplished except disruption to the neighbourhood and more speeding during off-peak hours.

Councillor Sue Uteck, the fourth member of the Peninsula Community Council, was out of town.

HRM Regional Council will discuss the Road Network Functional Plan [PDF] at Committee of the Whole on September 13, Watts said. This plan, and related provincial Highway 102 Corridor projects to cost at least $276 million more (not counting the purchase of part or all of a further 42 more properties) will have enormous and irreversible effects on Halifax, she said.

“It is concerning that if the Plan is passed as recommended by staff then the Bayers Road widening proposal will be further confirmed as a logical future step in the implementation of the Plan,” she said.

Throughout the “planning,” Watts said, active transportation options that could work for everyone have been barely considered.

The Bayers Rd/Highway 102 Corridor Study [PDF] will come to the Transportation Standing Committee on September 23 but it is unclear when it will be discussed at Regional Council.

Editorial Note: The Ecology Action Centre is circulating a petition to ‘Explore all options before accepting a transportation reserve for Bayers Road in Halifax, Nova Scotia. Click here.