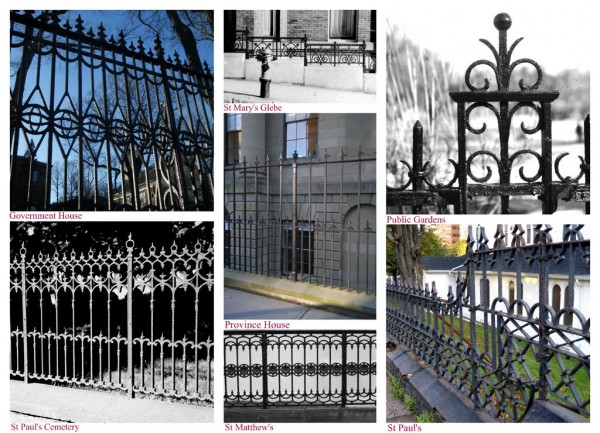 HALIFAX – Do you notice that central Halifax contains a lot of iron fences and railings?  To the west of Citadel Hill full blocks of former Commons are surrounded by high iron railings: Camp Hill Cemetery, the Public Gardens and the Wanderers Grounds.  This group of fences started to be installed early in the 1900s and their plain iron uprights combine strength and transparency – keep us out but allow us to see in.  One of the things that make the Gardens special is the fact that our entry is controlled (and we love to complain about it).

At the corner of Spring Garden and Barrington there is a beautiful group of fences 40 or 50 years older. Those in front of the St Matthews and around the St Paul’s Cemetery date from 1860 and were part of the redevelopment of the area that saw the building of the church, the courthouse and the Welsford Parker Monument.

Further up Barrington Street, the fence around St. Paul’s Church probably dates from the same period and is now in very fragile condition. These cast iron fences were probably manufactured in Nova Scotia possibly in one of the several foundries in Halifax.  The pattern used around St. Paul’s Cemetery survives in a number of other locations in the province.

The oldest iron railing and the oldest architectural cast iron in Nova Scotia is around Province House.  It surrounds a block of the original 18th century street grid and has been in place since about 1817.  At that time there were no foundries in Nova Scotia so this fine example of Georgian ironwork was purchased from the Carron Company in Scotland, the largest foundry in Europe. Robert Adam, the architect, designed for Carron and was a director of the company.

We are fortunate that so much ironwork has survived and has been maintained.  The fences add continuity to our streetscapes and provide a sense of entry and enclosure when you step through their gates.  Take a moment to appreciate them as you walk by.