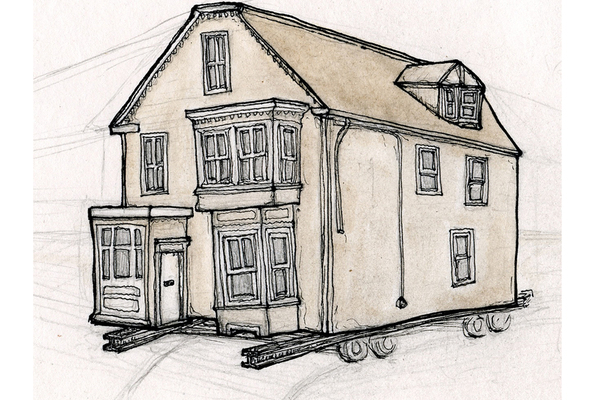 HALIFAX – For those who haven’t been scrutinizing the urban landscape for the last few years, the appearance of a centuries’-old house, stilted and shunted to the edge of the parking lot across from the Trident Cafe, must be a mighty strange site.

Having survived the demolition of the neighbouring Victoria Apartments in 2009, the Morris House has since found refuge on an adjacent parcel of land. 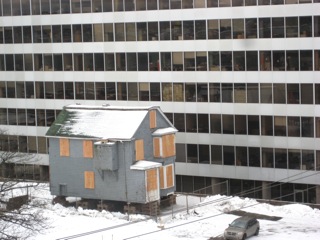 Spacing Atlantic reported extensively on the loss of the Victoria Apartments, a beautiful heritage property that has connections with the Morris family, the first and only Chief Surveyors of Nova Scotia. In its later years, the Apartments were a hub for musicians and artists and one of the last vestiges of affordable housing in the city’s South End.

The historic Morris House, the second oldest wood structure in HRM, seems to have been dormant in the years since its rescue from the bulldozer. But appearances are deceiving, and over the last three years a buzz of activity has been surrounding the Morris House, its preservation and its future.

Since they saved the house in 2009, a Joint Action Committee comprised of the Ecology Action Centre, Heritage Trust of Nova Scotia, Metro Non Profit Housing Association, and the ARK have been busy preparing for the Morris House’s next life.

It took some time, but the donation of a lot at the south west corner of Creighton and Charles Streets in the North End secured the Morris House’s fate. When it’s moved in early 2013, the Morris House will be expanded and developed as (energy efficient) affordable housing  for nine young adults. 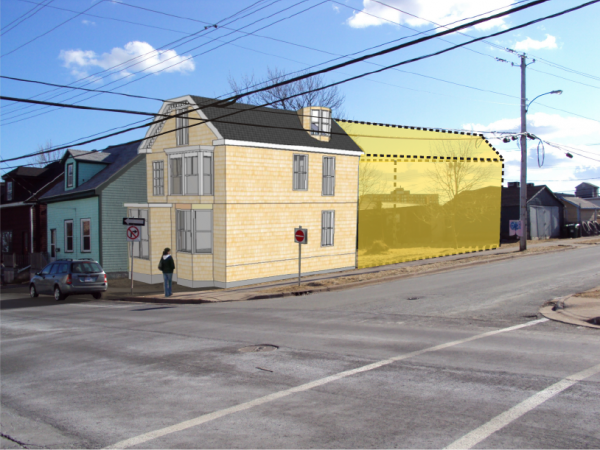 A rendering of the Morris House’s new home, at Creighton and Charles Streets, with an addition still in the design phase

The project is a beautiful mix of elements that would make any local urbanist melt: the preservation of the city’s heritage built environment, the marriage of old and new architectural styles, adaptive reuse of recycled building materials, the provision of affordable housing, and the monumental filling of one of Halifax’s infamous vacant lots.

It’s no wonder the Morris House has been the subject of countless academic and art projects. (Its allure most recently attracted Anna Sprague, who surrounded the house with whimsical white balloons for Nocturne 2012.) Since it was rescued in 2009, the sight of the lonely house has embodied a powerful energy, it’s back turned to the street it used to be an intimate part of.

There’s something captivating about the persistence of the Morris House, its insistence that it continue to be a conspicuous member of the cast of characters that make up Halifax’s built environment. There will also be something magical about witnessing the historic house sail three kilometers through the streets of Halifax when it is moved to its new home in the North End early next year.

With these qualities, the Morris House project is capable of catalyzing a deep conversation about affordable housing and inclusivity in Halifax, a conversation we desperately need to have. The project is also a dramatic testament to the idea that the “greenest building is the one still standing”.

In efforts to raise funds for moving the house, an Indiegogo campaign has been set up. The house is scheduled to move in early January. 2013. Check out the Morris House website for updates and more information.