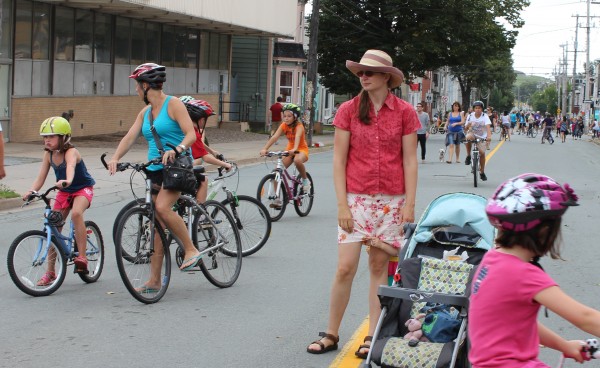 HALIFAX – What is the public domain? Streets are often left out of the equation. This Sunday, Switch: Open Street Sunday caps off Bike Week by closing streets to traffic and opening them to cyclists, children, walkers, skaters, DJs, and joggers. The idea is to stop talking about different modes of transportation and the sustainable city and begin imagining it—for one day. Switch lets people move freely and safely through the streets, connecting multiple neighborhoods, fostering physical activity and sense of place and play.

Open Streets is inspired by Ciclovia, which originated in the recreation department of Gil Penalosa. Part of Penalosa’s Carmichael lecture last winter in Halifax was that cities aren’t only for athletic 30 year olds, but for everyone. Achieving this is a long-term endeavor. The process of approval for last year’s Sept Sept. 9th Switch is one indicator. To close a route required 2.5 years of organizing and the curtailing of peninsula-wide ambitions into 2km (Penalosa encourages a route to be at least 10km). While Open Streets in Halifax has few opponents, regulations in place requiring specific barricades, ratio of police officers, and recurring canvassing of houses along the route all create out of proportion financial and human resources barriers.

Open Streets are gaining momentum in other cities around the world. Last week, Atlanta held Streets Alive!, Cape Town held an inaugural Open Streets, and after six years of Open Streets Portland, the initiative is finally being written into the city budget as an ongoing event. The hope for Switch is to gain similar status: an initiative that gains ongoing status and support from the city. Instead of being  a one-off event, Switch needs to be thought of as a tool for neighborhoods to be active, inspired, connected, and strong.