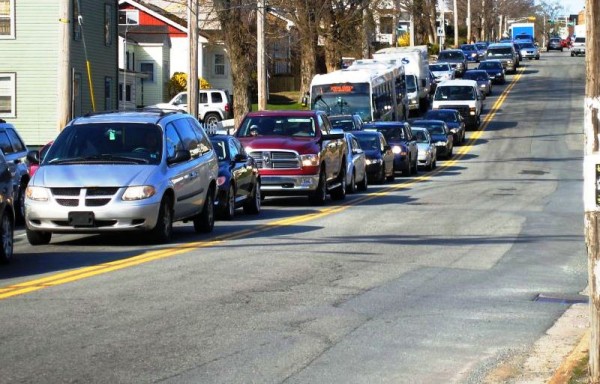 A route 1 bus is traveling along Bayer’s Road at o km/hr. A route 52 bus is stuck on Joseph Howe Drive, also traveling at 0 km/hr. When will they meet at Mumford Terminal?

The speed and reliability of transit drops dramatically when vehicles run in traffic. High quality transit doesn’t get stuck in traffic. High quality transit has a right-of-way to get past traffic. Some transit systems have their own path entirely separated from other traffic. Subways, the Vancouver Sky-train, some light-rail lines and bus-ways in Ottawa, Curitiba and Bogota all have dedicated paths just for transit. These are reliable, high performance systems, capable of high speeds, tight headways and high passenger volumes. 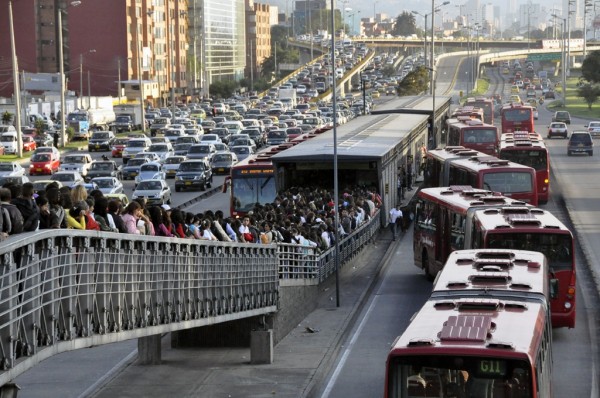 Other transit lines have paths partially dedicated to transit; most commuter rail services in North America share their path with freight trains, which often limits transit’s speed, reliability and frequency. Halifax’s ferries run almost entirely free from traffic, except for the odd time a container ship has to pass. Bus rapid transit and on-street light rail lines share road space with cars, but still have lanes dedicated for transit. They can get slowed down at intersections, or if a vehicle blocks the transit lane, but otherwise run smoothly. Other transit lines use a combination of short queue-jump lanes and special transit signals to give transit vehicles an advantage at trouble spots. 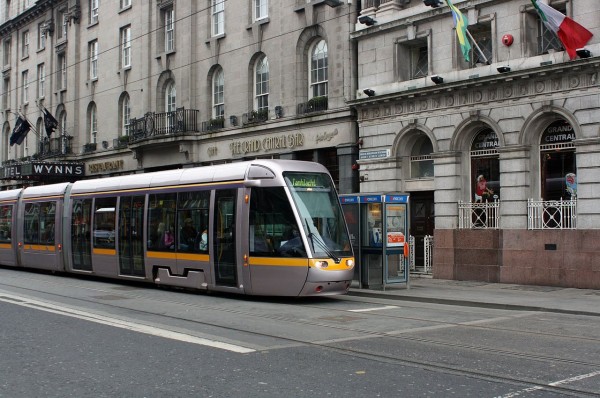 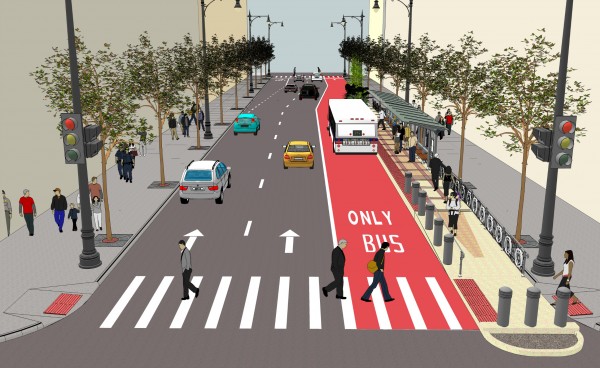 And then there are buses stuck in traffic – almost all of Halifax Transit’s service. Buses routinely bunch up and fall off schedule at choke points like Bayer’s Road, the Bridges and the Fairview Overpass. Halifax Transit’s average operating speed is under 20 km/hr. Not many people will choose transit that slow and unreliable.

Some people argue that the solution is commuter rail, light rail, streetcars or more ferries: anything but buses. The solution is not choosing different vehicles. The solution is giving transit the priority over traffic. Whatever vehicles we choose, transit service will only be as good as the path we give those vehicles. Major corridors, including Gottingen Street, Robie Street, Woodland Avenue, Portland Street and Herring Cove Road will need to run transit service on-street. These are busy corridors, with all-day transit demand.

If Halifax is to dramatically increase transit ridership, we will have to provide high-quality, on-street transit service on many important corridors. High-quality transit service is fast, frequent and reliable. For on-street transit to be reliable, it has to have some priority over traffic, especially at choke-points like Magazine Hill and the Armdale Rotary. Getting transit through chokepoints is a huge priority.There are a range of options available, including  queue-jumps, transit signals and full transit lanes. We should choose solutions based on how fast and reliable we want transit service to be on a given corridor, and based on the importance of corridors to the entire network.

Sound easy, right. There’s two issues. One, transit priority costs money – new lanes might be needed, transit signals and technology have to be installed and sometimes tracks or new pavement are built. High quality public transit, however, is an excellent investment. Transit reduces energy consumption and greenhouse gas emissions. Transit reduces the need for parking and increases property values. Transit allows more people to easily reach jobs and services and participate in the economy. Transit priority measures are a particularly good investment. Remember those buses sitting on Bayer’s Road? Halifax Transit pays drivers salaries whether a bus is idling in traffic or quickly delivering happy passengers. Fast and reliable transit is cheaper to operate. Not only that, fast and reliable transit will attract more riders and more fare revenue. Transit priority is an excellent way to reduce operating costs and increase revenue.

The second issue is the big problem: transit priority often involves taking space from cars. This is politically difficult in the extreme, as our society has become accustomed to giving cars whatever space they ‘need’ and worrying about other modes later. There are three responses to consider. First, transit provides many benefits to cities, but only when many people chose to ride. Transit priority measures make transit a much better choice. Second, transit lanes can move more people than lanes dedicated to cars. Over 5,000 bus riders already cross the MacDonald Bridge every day in rush-hour. Dedicating one lane to transit in rush hour would move at least 5,000 people, more than one lane of car traffic can carry. Transit is simply a more efficient use of road space on busy corridors.

Finally, transit priority is about fairness. As Enrique Penalosa, former mayor of Bogota, Coumbia says: “If all citizens are equal before the law, then a bus with 100 passengers has a right to 100 times more road space than a car with one.” Transit is a space efficient way to move people: transit riders deserve reliable service and their fair share of road space.

Next columns: frequency and transfers.