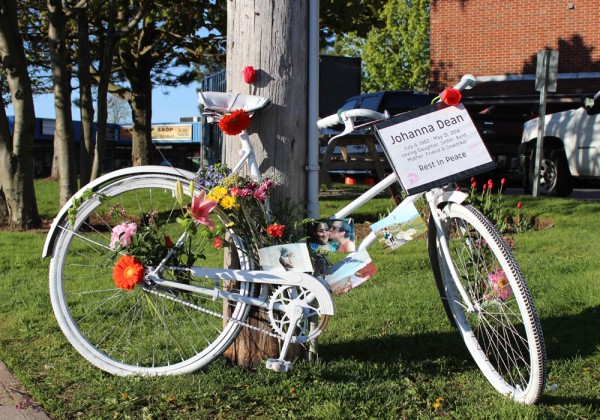 Back in May, Haligonians were saddened by the tragic death of 30-year-old elementary school teacher, Johanna Dean. Dean was an avid cyclist who was riding north on Windmill Road when a delivery truck turning right collided with her. Dean fell and went under the truck. She died at the scene. A memorial ride organized by the Halifax Cycling Coalition and Dean’s family a week later attracted hundreds of cyclists. Halifax Regional Police recently concluded their investigation into Dean’s death with the announcement that no charges would be laid. While the police didn’t identify any criminal responsibility, the accident might have turned out very differently had the truck been equipped with side guards and it might not have happened at all if Halifax had better cycling infrastructure.

Often, after accidents, there is a tendency to blame the driver or the pedestrian or the cyclist for whatever human elements contributed to the accident. “If people just paid more attention” goes the popular refrain. Undoubtedly, there is some truth in that; inattention and carelessness does cause accidents. What’s missing though is the recognition that people are imperfect. No one gets behind the wheel intent on killing a stranger and pedestrians and cyclists don’t leaves home hoping to be run down. A moment of inattention is all it takes. Inattention is something we have all been guilty of at one time or another; it’s just that most of us have been fortunate that our slips haven’t resulted in tragedy. Education and enforcement is important to deal with drivers, pedestrians and cyclists who regularly ignore the rules of the road, but it isn’t enough. Accidents are still going to happen. If we really want to reduce their number and severity, we need to look at design.

Side Guards:
Even if Halifax began to aggressively expand cycling routes, it would still take many years to build a complete network. Cyclists and vehicles need to share road space and that means vehicles need to be built with cyclists in mind. Trucks, like the one that hit Dean, could be made significantly safer with the addition of side guards. A side guard is a metal barrier that covers the gap between a truck’s front and rear tires. They make it less likely that a cyclist or a pedestrian will slip underneath during an accident. Ontario’s Chief Coroner looked at cycling deaths from 2006-2010 and noted that collisions with trucks accounted for 18 of the province’s 100 cycling deaths and, in half of them, the cyclist hit the side of the vehicle before being pinned or crushed underneath. Side guards are already mandatory in Europe and Japan and research suggests that they save lives. After the UK introduced guards, the overall number of cyclists injured and killed in truck accidents fell by 18.9%. For accidents in which the side of the truck was the initial point of contact, the reduction was a staggering 73.8% (Integrated Safety Guards and Spray Suppression, 2005).

The UK data strongly suggests that side guards reduce injuries and save lives. Canada’s National Collision Database indicates that around 100 cyclists and pedestrians will be seriously injured in collisions involving the sides of large trucks every year.* About five of them will die. Behind those cold statistics are many sad stories.

The National Research Council (NRC) studied side guards for Transport Canada in 2010. NRC even carried out laboratory testing to see whether side skirts could reduce injuries and deaths. Side skirts, like side guards, cover the gap between a truck’s front and rear wheels, but instead of a metal grill, they are light-weight panels that are designed to improve aerodynamics and save fuel. NRC was trying to determine if they could also save lives. In NRC’s testing, side skirts prevented a moving bike weighed down with a cement block from going underneath a trailer. Unfortunately, before more detailed testing could be carried out, Transport Canada cancelled the study. Transport Canada dismisses the UK data and claims that there is no evidence that side guards or side skirts reduce injuries and deaths. The department has stuck to that position, despite calls from Ontario’s Coroner, municipal leaders, members of parliament and cycling organizations across the country. Transport Canada seems to be firmly aligned with the trucking industry, which opposes mandatory regulations.

Although Canada’s national regulator is currently unwilling to make side guards mandatory, there is nothing stopping the provinces and municipalities from going it alone. Transport Canada sets the standard for newly built trucks, but the provinces have the power to regulate existing vehicles. The provinces should use their regulatory power to make the roads safer. Municipalities can also lead by example and retrofit their own fleet of vehicles. Montreal recently announced that it would install side guards on its 1,000 vehicle fleet and Boston is taking similar action. Halifax would be wise to follow suit. City-owned vehicles should be equipped with side guards and their installation should be a contractual obligation for private operators working for the municipality. $2,000 a truck is not a lot of money to potentially save a life. If the truck that killed Dean had been equipped with guards, the accident might have turned out differently. 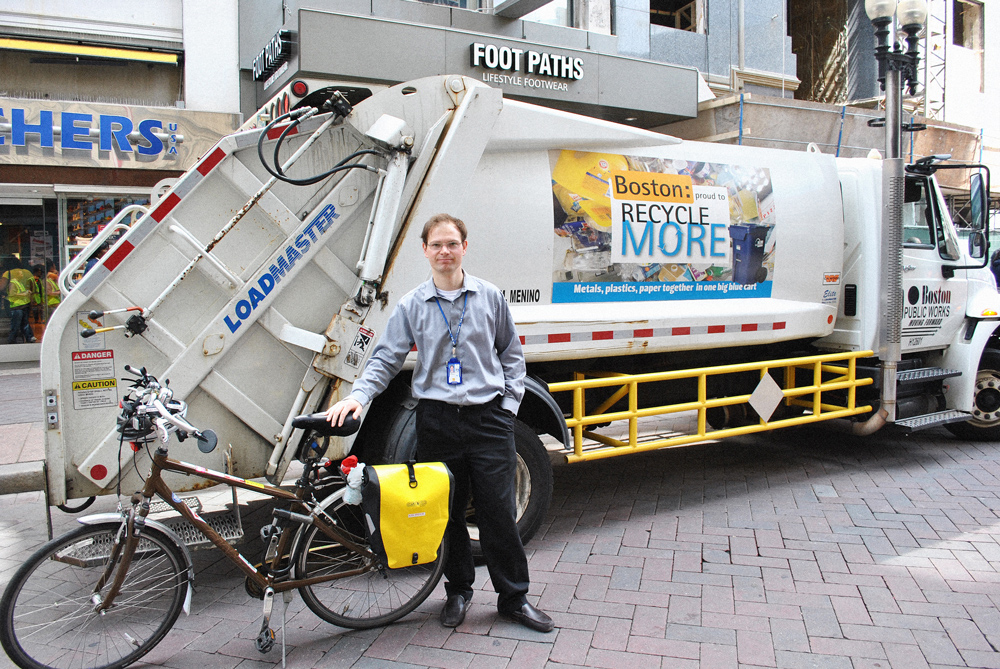 Cycling Infrastructure:
Making safer trucks is an important part of mitigating the impact of accidents, but what if we could prevent them from happening in the first place? A city-wide network of cycling routes holds out just such a promise. In recent years, Halifax has made some progress on active transportation, but the City still has a long way to go. The bulk of the City’s recent spending has gone towards easily doable projects, resulting in a fragmented network that is largely focussed on bikes as recreation, not transportation. Very little has been built in the urban core and this is particularly true in North Dartmouth where Dean died. Cyclists heading north have to choose between Windmill, Wyse and Victoria Roads and all three are busy streets with no bike lanes. Windmill and Wyse Roads are identified as candidates for bike lanes in the 2014-2019 Active Transportation Priorities Plan, but the lanes may never be built. The Plan has a very modest goal of installing just 30% of candidate lanes across the municipality.

Halifax is also not seriously considering separating cyclists from cars and trucks. If bike lanes are eventually installed in North Dartmouth, they will likely take the form of painted lines. Painted bike lanes are better than nothing, but vehicles often enter them and they frequently run alongside street parking. Separated lanes increase ridership by making cycling more appealing to a broader audience and research from Denmark indicates that they can reduce deaths by 35% (Herrstedt, 1997). The Halifax Cycling Coalition is lobbying the City to build more separated bike lanes, but the Priorities Plan formally commits the municipality to just one pilot project. Had there been a separated bike lane on Windmill Road, Dean’s accident might have never happened. We know separated lanes work in other places, there is simply no reason to think they would produce different results in Halifax. The City should be more ambitious in rolling out its active transportation plan. 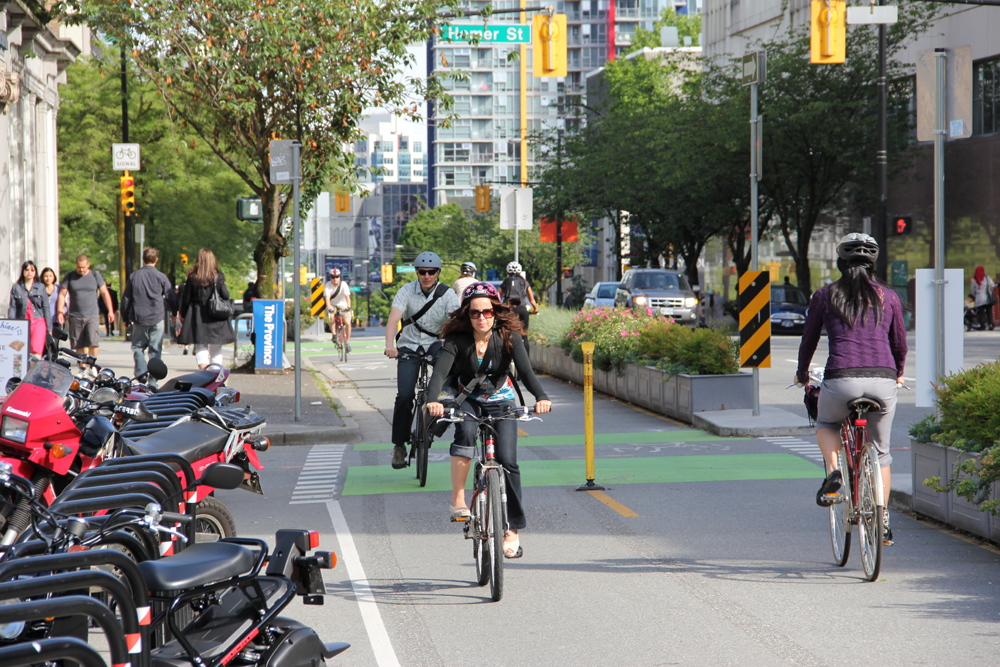 Unfortunately, regulating safer trucks and building a cycling network won’t bring Johanna Dean back. By looking at what went wrong and acting on it though, future lives could be saved. Dean’s family has said that they hope Johanna’s death draws attention to the need for improved safety for cyclists. Federal, provincial and municipal leaders take note, safer trucks and a better active transportation network would be good places to start.

Notes:
*National Collision Data for cyclists 2004-2006 is not available from Manitoba and does not identify a point of impact in Quebec