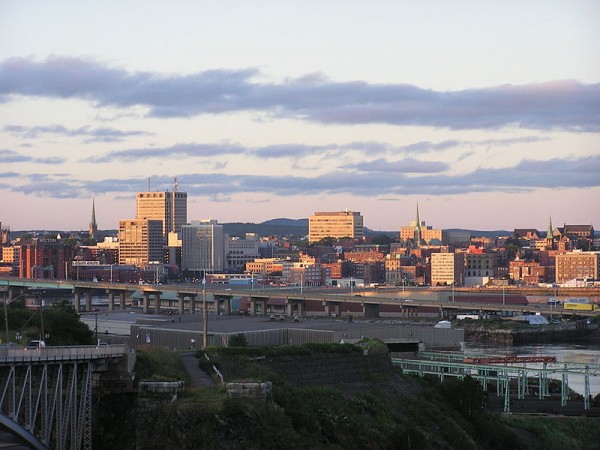 I recently completed my PhD in Sociology at the University of New Brunswick in Fredericton. The topic of my dissertation was the challenges of suburbanization for local government in Greater Saint John, New Brunswick. This topic involves the issues of fragmentation of local government authority across a metropolitan region. It is particularly worth noting that this topic involves a smaller city region, urban issues do not just affect larger cities.

Saint John mayor Mel Norton presented a motion (approved by Saint John city council) for me to come and present my research. I enjoyed the opportunity to present my research to policymakers. I would especially like to thank Mayor Mel Norton for presenting this motion, it is great to see a public servant with a strong interest in building links between academia and policy-makers to promote better public policy. I would also like to thank Saint John city council for approving this motion and for the great questions they had after my presentation.

Below is a write-up based on my remarks, a video of my presentation is available on Rogers TV (April 18th meeting of Common Council). I was on Rogers TV in New Brunswick at 8:00PM (Atlantic Time) on April 27th on “What Matters Most” with John Case to discuss these themes.

The metropolitan problem was identified in the 1963 Goldenberg Report on Greater Saint John (which formed the basis of the 1967 amalgamation) as one that “arises where the units of local government having jurisdiction within a metropolitan area are unable to satisfy the demands of their citizens because of insufficient powers, inadequate territorial limits, or a combination of both.”

My research explored this metropolitan problem through interviews with policy leaders in Greater Saint John and an analysis of reports on local government reform (pertaining to the province of New Brunswick and City of Saint John) from 1963 to 2008.

I will emphasize below four main points: (1) Amalgamation is not the only solution; (2) It is important to know the historic background, past reforms provide context; (3) It is important to find a common regional sense of purpose for Greater Saint John; (4) While the image of New Brunswick is one of a rural province, city-regions (urban and suburban areas) are of increasing importance with implications for metropolitan administration and local control.

I will deal with each of these points below.

Amalgamation is not the only solution

It is important to look at different approaches to the issue of fragmentation of municipal authority across metropolitan regions. While amalgamation is one solution, it is not the only solution and not necessarily the best solution.

In this respect, regionalist thought is illustrative. Old Regionalism emphasizes direct provincial and state action to consolidate (amalgamate) a metropolitan region. David Rusk, an economist and former mayor of Albuquerque, New Mexico, is a strong advocate of this position. New Regionalism, by contrast, seeks a more consensual model to bring together local stakeholders in a forum for metropolitan cooperation. This usually stops short of full metropolitan amalgamation.

In my research, I looked at three eras of reform in New Brunswick with respect to Greater Saint John. The first era is the 1950s and 1960s which saw the advent of the automobile and post-WWII suburbanization. This saw the growth of Lancaster and Simonds. Lancaster was incorporated as a city and there were widespread demands for incorporation of Simonds as a city. A potential concern was a small metropolitan region consisting of three competing cities. 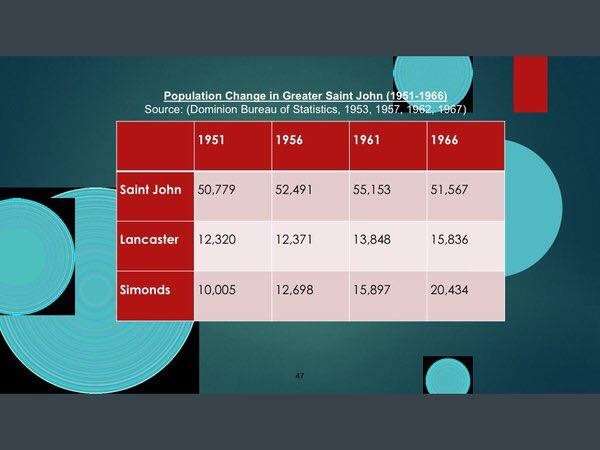 The second era, the 1960s, saw a political response to these demographic changes. With the local municipalities not agreeing on a path forward the province stepped in and commissioned the Goldenberg Report which recommended amalgamation. This recommendation was implemented in 1967 with the amalgamation of the City of Saint John, the City of Lancaster, and a portion of Simonds.

The 1960s also saw the Equal Opportunity reforms where jurisdictional authority was radically centralized away from municipalities and with the province.

The third era, post-1960s, saw continued suburban growth beyond the boundaries of the 1967 amalgamation. This brought renewed concerns about fragmentation and renewed calls for reform. This included developing a substantive form of metropolitan administration and providing greater local control to municipalities where Equal Opportunity in the 1960s had centralized authority at the provincial level.

The chart below shows the demographic changes from the 1970s to the 1990s, leading into a period where there was a series of reports on local government in the 1990s and 2000s which, largely, saw little action by the provincial government. 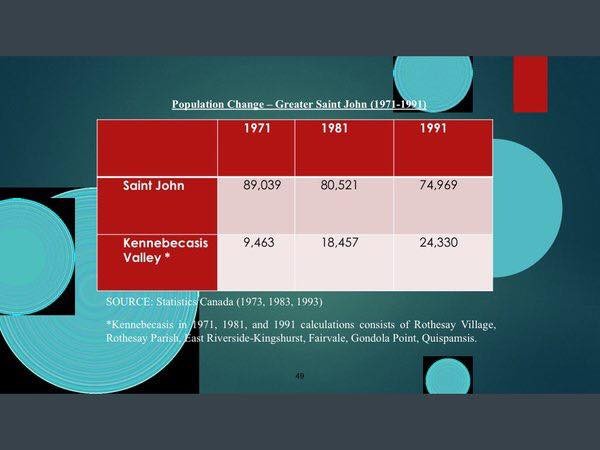 In the interviews I conducted as part of my research, there was sharp disagreement on amalgamation with support for it in the City of Saint John but resistance in the suburban municipalities. However, there was agreement that there was a common purpose in the metropolitan region with Saint John as the economic hub. Also, there were widespread calls for greater municipal control and authority.

One can add that a healthy and vital city centre reflects well on the region as a whole (including the suburbs). A healthy city centre is an attraction for investment and new residents which benefits the city and the suburbs.

The importance of city regions

Maine is a jurisdiction which in many ways is like New Brunswick, both are smaller jurisdictions consisting of smaller city regions. A 2006 Brookings Institution report on Maine emphasizes that while the state is traditionally considered “rural,” increasingly more people are living in metropolitan and micro-politan areas. The report cited growing suburbanization as a major trend affecting the state.

Amalgamation is one solution but it is not the only solution, in many situations it may not even be a good policy prescription. Mariona Tomàs, in a peer reviewed article, highlights that polarization among stakeholders – between amalgamation and maintenance of municipal boundaries – led to a polarization which inhibited reform in Greater Montreal. One could see the debate over the Cormier Report in Saint John in this context.

Furthermore, evidence-based policy is important. For instance, cost-savings from consolidation and amalgamation are often assumed without any cost-benefit analysis to back it up. If this cannot be proven, then another basis has to be given for consolidation of services or municipalities (for example better coordination of services).

These are some thoughts on local government reform and administration in Greater Saint John to help inform the debate.

Hassan Arif recently completed his PhD in urban sociology at the University of New Brunswick. You can follow him on Twitter: @HassanNB