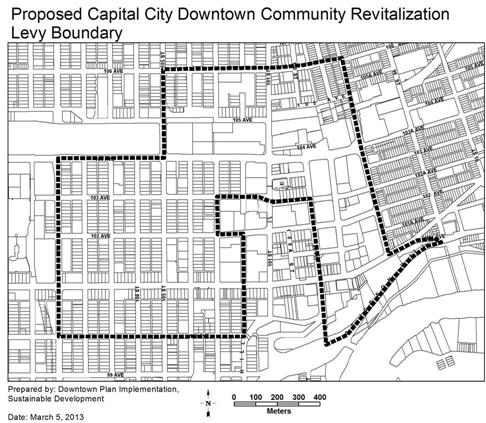 Today City Council will consider a possible framework for a downtown Community Revitalization Levy (CRL). The discussion is, of course, being framed as being intimately connected to a certain megaproject. But there’s a broader policy question at stake here: should the benefits a city receives from development in a particular area be channelled to that same area? Regardless of whether a CRL is applied, and regardless of the ongoing theatrics of the arena project, this question is worth pondering for a moment. It’s being given some attention indirectly, but hasn’t come to the forefront yet.

Municipal governments in Canada rely on property taxes for revenue. So cities benefit from new property developments and from value added to existing property; they are growth machines. The public benefit from development by virtue of the increased value captured by the municipality to support municipal services or infrastructure. In this context, a CRL is conceived to work as follows:

The CRL is sold as an arena funding mechanism that doesn’t increase taxes. This is at least somewhat disingenuous. If successful in capturing increased revenue beyond the initial investment, it is actually a tool to constrain future policy choices by forcing the benefits of development to flow to a particular area. It’s arguably a clumsy tool for doing so—other cities, where land is scarcer, take a more direct approach with development, and there is much room for disagreement about the proposed implementation of a CRL—but how public benefits are captured and allocated is actually a much bigger question than whether there’s a new building built to sit empty during the playoffs.

Actually, a whole series of questions emerge. Should the public benefits of development downtown flow to downtown? The pie chart linked above suggests that it currently doesn’t; property taxes collected in the core drift out to the suburbs. If the “catalyst” model is right, then what projects are actually likely to spur development downtown? What will it take for Edmonton to transform its collection of dusty surface parking lots into something else? Wider sidewalks? An LRT connection? More public spaces?

And, what about other areas of the city? If an LRT line to Mill Woods increases property values, resulting in more revenue for the City, should those funds be restricted to improving Mill Woods? What makes downtown special? And, hypothetically, what if there weren’t a list of projects to be undertaken within a CRL boundary? Indeed, the assortment of “catalyst” projects proposed for downtown raises (still more) questions about planning, coordination and prioritization.

The allocation of public benefits is tremendously complex; it is a challenge that all cities face. The discussion is, indeed, being held hostage by the project that started it, but the opportunity is to consider the bigger questions on their own, and to focus on planning a city, not an arena. Notwithstanding a great deal of public discourse, they are not quite the same thing.