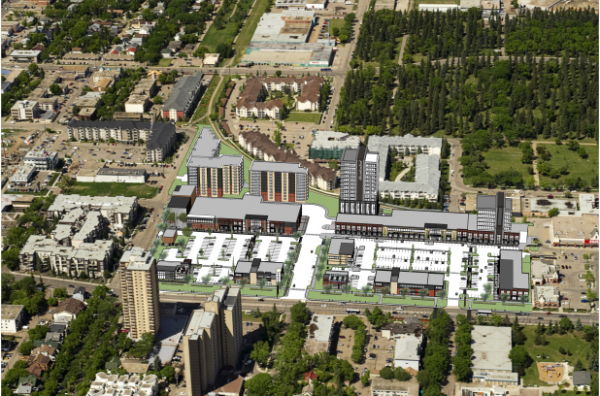 This is the first of two articles discussing proposed plans for the Molson/Crosstown site in northwest Oliver. Part one focuses on planning and zoning frameworks in Edmonton and how they impact development in the city. Part two focuses on the Molson Brewery and will be published next week. Part two can be read here.

When Mayor Mandel declared “No more crap!” in his State of the City Address in 2005, it was supposed to usher in an era of quality architecture and urban form in Edmonton. Eight years later, the Oliver neighbourhood is facing the possibility of yet another auto-oriented big box shopping centre on the former Molson/Crosstown site near 104 Avenue and 120 Street – approximately 14.2 acres of prime infill property sandwiched between mid- to high-rise residential buildings to the west, north and south and the Oliver Square development to the east. At a recent open house in which City Administration and the applicants (Sun Life Financial and First Capital Realty along with their consultants from ParioPlan and Dialog) presented a proposal to rezone the Molson site from Heavy Industrial to a General Business Zone and a High Rise Apartment Zone in the southern and northern halves of the site, respectively. They also presented preliminary site plans for the lands. At the meeting, residents from Oliver and surrounding neighbourhoods seemed to echo Mandel’s sentiment of eight years ago: “No more [Oliver Square] crap!”

In the time since Mandel’s famous declaration, the City has developed a series of documents known as The Ways. The purpose of these documents is to set the direction for development in the City and guide its growth. The first two documents to be developed were The Way We Grow (the City’s Municipal Development Plan or MDP) and The Way We Move (the City’s Transportation Management Plan or TMP). In Alberta, an MDP is a statutory plan that establishes policies for land use in municipalities. These are mandatory for municipalities with a population of 3,500 or more. In Edmonton, the new MDP and TMP have been touted as marking a turning point in planning and development in Edmonton and among other things, emphasize smart, compact and sustainable growth, complete, healthy and livable communities, and transit-oriented development (TOD).

The Molson/Crosstown proposal stands as the first true test of the power of these documents and the City’s resolve to uphold the policies and standards therein. At worst, the proposal in its present iteration laughs in the face of The Ways documents. At best, it simply denies their existence. In particular, the strong automobile orientation, lack of mixed use, and emphasis on parking in the proposal is completely counter to the City’s policies on compact, complete communities that are anchored by transit hubs. In fact, the current proposal includes approximately 925 parking spaces (455 surface and 470 underground) on a site that will be directly adjacent to a future LRT station and one of the densest neighbourhoods in Edmonton. What’s more, Ward 6 Councillor Jane Batty is all too aware of this disconnect noting that after viewing plans by the applicants, the actual transit-oriented development pieces of the project will not be implemented “until later on.”* She contends that this makes sense since “the LRT running down 104th Avenue won’t be happening for a number of years.” This is hardly a forward thinking and progressive attitude towards TOD – wouldn’t it make sense to ensure that new/infill developments along these planned lines adhere to the tenets of TOD now, rather than hoping that ad hoc retrofits occur in some vague future scenario?

So if the MDP establishes policies for land use in Edmonton, how does this happen? The problem is arguably due to a disconnect between statutory plans and zoning on the one hand, and a lack of political courage and accountability on the other. First, a municipality’s zoning bylaw regulates the use and development of land. At present there is a disconnect between the City’s guiding documents and its zoning bylaw. This is not a new problem, nor is it a unique one. Examples can be found across Alberta and likely, across the country. With its new MDP and TMP, Edmonton is in need of serious zoning reform – for example, the proposed parking provisions on the Molson/Crosstown site are minimums according to the zoning bylaw, despite being situated adjacent to an existing Transit Avenue, a future LRT line and within the 7th most walkable neighbourhood in Edmonton according to Walkscore. In theory, zoning is subordinate to the MDP. The zoning bylaw is meant to support this document and act as a tool for its implementation, not provide developers with avenues around their obligations to quality city building – something often lost in a jumble of market projections, financing constraints and construction deadlines. The unfortunate reality in this case is that the applicants are (at least in one sense) operating within the rules as laid out by zoning.

Equally important is a need for courage among our local politicians to stand up, recognize and uphold the very policies, standards and documents that they have approved – and often trumpeted. If they cannot find this courage, it is our responsibility as citizens to call attention to this and every four years, hold them to account at the polls. In the case of the Molson/Crosstown proposal, if the rezoning application is approved by Council, the development cannot be refused since it would be in line with the zoning bylaw. However, Council does have the power to refuse the rezoning application and to put some pressure on the applicants to bring their proposal in-line with City policies – residents, in turn, can put pressure on their elected officials to uphold these policies. Ultimately, without zoning reforms and a little political courage and accountability, instead of building a quality city that is healthy, livable, sustainable and progressive, we risk getting more crap.

*Personally, I would like to see these plans. During the open house (and after much pressing by attendees), the applicants made vague promises that mixed use, density and TOD might “eventually” be part of the plans if market conditions were right.