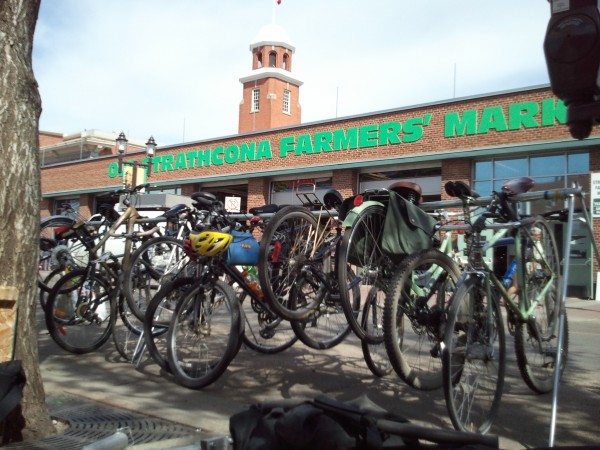 On June 29, a group of citizens, going by the name of Strathcona Complete Streets, set up portable bicycle racks in Old Strathcona directly across from the Old Strathcona Farmers’ Market and encouraged cyclists to show up, lock up, and sign up to endorse better bicycle infrastructure in the area. The event was well-received and many people suggested it should become a regular feature of the area.

This event was to bring attention to the City of Edmonton Bicycle Transportation Plan (2009), which outlines a core bicycle network and designates bike routes and other bicycle infrastructure throughout the city. As part of the plan, the document proposes the development of a bicycle boulevard on 83 avenue which runs parallel to busy Whyte (82) Avenue. Strathcona Complete Streets believes the 83 avenue bike boulevard is a crucial east-west connection needed to promote safe cycling in Edmonton. The boulevard would connect the University of Alberta, Old Strathcona, Mill Creek Ravine and Campus Saint-Jean. Map of Bike Boulevard (PDF)

The City of Edmonton has stalled with the development of bike infrastructure in the city partly due to politics, vocal opposition, and a lack of funding (partly because of the former). After meeting with city planners, managers and council members, it became obvious to the group that public support was necessary to get the ball rolling for better bicycle infrastructure.

The philosophy of the group is simple, and is perhaps best summated with the words of Jane Jacobs:

“…cities have the capability of providing something for everybody, only because, and only when, they are created by everybody.”

The Death and Life of Great American Cities

Initial investments needed to make 83 avenue into a bicycle boulevard would be minimal and could be implemented over the next two seasons. These features include the following:

THE BENEFITS OF WELL-DESIGNED BIKE BOULEVARDS

Cyclists benefit by having more direct, easy to navigate routes. Bicycle boulevards increase cyclist comfort as they have a larger presence and right to be on the road. Movement on the street is slowed to a more human speed, allowing cyclists to interact more seamlessly with motor vehicles.

Pedestrians also benefit by having a safer, quieter street to walk down with much less traffic, traveling at lower speeds. Additionally, cyclists and pedestrians enjoy a similar ‘scale’ of street, one not optimized for motor vehicles traveling at high-speeds with a limited field of vision.

Residents of the local community benefit by having a quieter, safer street designed for local traffic only, reducing neighbourhood ‘cut-throughs’ during peak hours. Residents also benefit by having more direct routes to and from their home when not using a motor vehicle.

Vehicle drivers benefit by not having to contend with cyclists for space on a main thoroughfare which is designed and optimized for high speed automotive travel (at a cost to the local community). With a street optimized for cyclists one block removed, it is likely that most cyclists will choose this more comfortable route.

Organizers will be turning their attention toward some other key locations in the city’s core (e.g. 104 Street / City Centre Market, 102 Avenue) to continue building support and awareness for the proposed changes. It is their belief that diverse and integrated transportation networks are hallmarks of great cities and a well thought-out bicycle network will contribute to the creation of resilient, connected communities for the benefit of all Edmontonians. 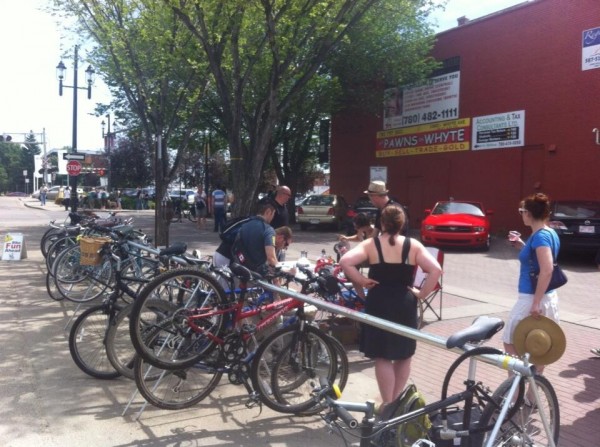