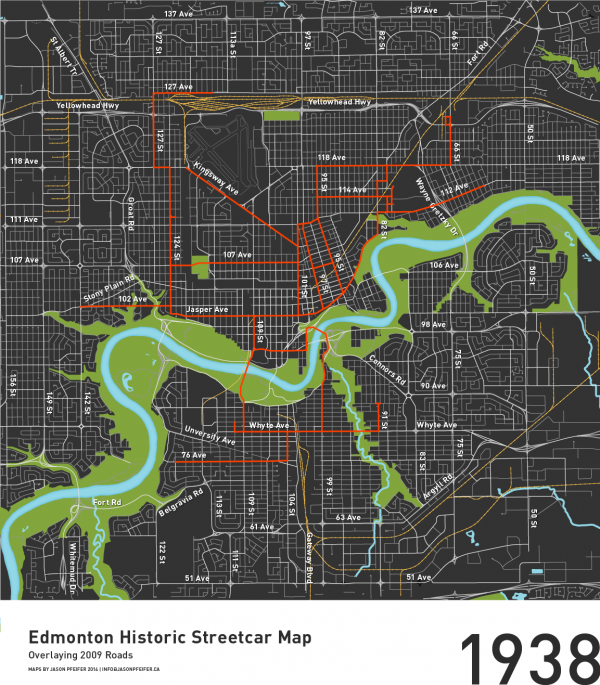 The quick answer is their likely inclusion in most Edmontonian’s top list of favourite streets or avenues to eat, shop, wine, dine, and take in arts, culture, and festivities.  They arguably contain the most diverse range of the city’s small independent businesses:  small ethnic and specialty grocers, high-brow coffee and low-brow diners, bakeries, bistros, theatres, cultural associations, neighbourhood pubs and bars, community services, festivals and markets.  They host and express established and emerging cultural and sub-cultural identities of our neighbourhoods: take Chinatown or Little Italy, or the resurgent energy and diversity of Alberta Avenue, as examples.  They are streets and avenues where young entrepreneurs and new Canadians perceive a community demand or desire and try to fill it while making a living.

They are all former streetcar routes.

Although harder to fathom when wedged between massive trucks aggressively tailgaiting down the Henday, Edmonton like most Canadian cities, was first and foremost a streetcar city.

There is a renewed academic interest in the role the streetcar played in the urban form of today’s cities.  In Vancouver, it is widely acknowledged that its most popular public walking streets coincide with historic streetcar routes.  Despite the many decades since the streetcar last operated, it is credited with giving Vancouver its ‘good bones’.  Patrick Condon, Chair of Urban Design and Landscape Architect at the University of British Columbia, author of Seven Rules for Sustainable Communities, is an outspoken planning advocate for “the streetcar city”. Condon notes:

“the streetcar established the form of most U.S. and Canadian cities. That pattern still constitutes the very bones of our cities — even now, when most of the streetcars are gone. […] Virtually all of the city of Vancouver’s richest social settings are on streetcar arterials. While the high-rise neighborhoods of Vancouver are justifiably famous, almost all of the rich street life of the downtown core still occurs on the streetcar arterials of Granville, Robson, Denman, and Davey Streets. Beyond the core lie miles and miles of very active streetcar arterials. These streets are typically thronged with pedestrians, in numbers that rival the much higher density areas of New York City. “

I spent ten years in Vancouver’s West End walking mainly its former streetcar arterials without the connection.  As a returnee less informed about the history of my hometown, I was curious to know if the same urban paradigm applied to Edmonton: what is the extent of Edmonton’s historic streetcar system, and does it share the same relationship to urban vibrancy today?

Leaning heavily on Edmonton’s Electric Transit, The Story of Edmonton’s Streetcars and Trolley Buses from our fabulous EPL, I recreated digital versions of Edmonton’s streetcar system (by the specific years published in the book), and overlaid them on the contemporary road and rail network.  Published first today on Spacing Edmonton; the results are intriguing:

The streetcar of yesteryear served a list of neighbourhoods considered favourites today: Oliver, Glenora, Strathcona, Westmount, Belgravia, Highlands, Alberta Avenue, Bonnie Doon, Garneau, Belgravia, and more.  So what is it about the streetcar as a method of mobility, that influenced the urban form of the city? In Seven Rules Condon has a great parable describing “a day in the life” in the early streetcar age of Vancouver, which is a recommended read but let me summarize:

The resulting quality that, according to Condon, is somewhat unique to North American cities is a set of interconnected public spaces that are linear in form. This is contrasted with the more traditional planning focus on activating ‘nodes’ or destinations, and less emphasis on the linear spaces which connect them.

It would be remiss not to acknowledge the negative perceptions that some of these streets have or have had in the past. I am admittedly old enough to recall some of these streets as the city’s ‘seediest’ areas.  This isn’t to suggest that the streetcar street is some form of urban panacea, but rather that as public spaces they are a prominent expression of a neighbourhood – whether its illness or health.

Interesting prologue:  The streetcar for a very brief period in 1913 extended all the way down Perron street in St. Albert before catching fire in 1914.  If plans come together, St. Albert might see rail return 30-40 years from now.