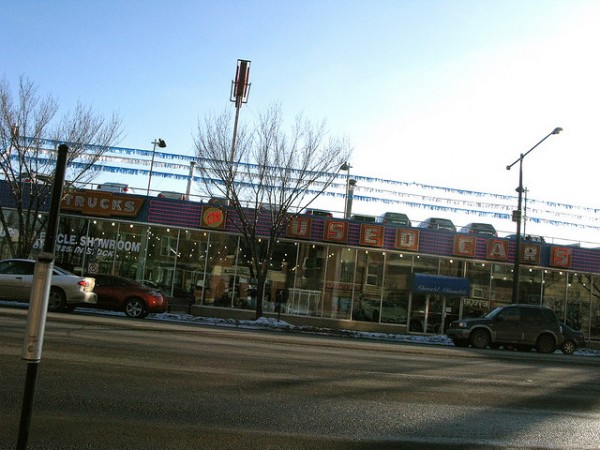 David Mussell, the general manager of Don Wheaton Motors on Edmonton’s Whyte Avenue, says “the tendency [for car dealerships] is to not be downtown anymore.” That seems like a painfully obvious observation in 2014, but it has not always been the case. In 1930, Edmonton Motors, the city’s oldest car dealership, built what was then the province’s largest indoor garage, and it built it right downtown at 100 Street and 102 Avenue. But as time marched forward and the city grew more congested, in 1955 Edmonton Motors retreated west to Oliver, then an Edmonton suburb. In recent years several other dealerships have similarly fled the downtown coop, the most recent being Crosstown Motors and Healy Ford. Today, aside from several small-fry used car lots, Edmonton has but three remaining car dealerships one might call ‘urban’ – Edmonton Motors, now surrounded by an increasingly dense and downtown-like portion of Jasper Ave., Ericksen Nissan, near the Royal Alexandra Hospital, and Don Wheaton, on Whyte, the city’s most bustling pedestrian boulevard. As Edmonton and other cities add density to their cores and as land becomes scarcer, are we nearing the end of the urban car dealership? Some say yes; others, however, see a surprisingly bright future for downtown car dealerships. 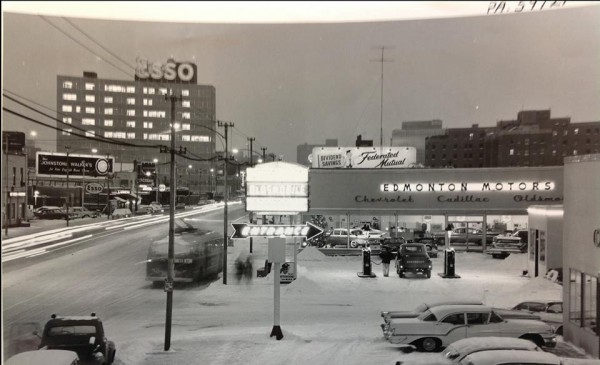 Harrison Wolfe, assistant general manager with Edmonton Motors, says a downtown car dealership no longer makes sense in Edmonton. Wolfe, a third-generation descendent of F.J. Wolfe, who founded Edmonton Motors in 1925, says motorists have by and large moved to the suburbs. “At one point in time, it did make sense [to have a dealership downtown] when the downtown was the hub,” he says. “But today, the average car buyer has no draw to come into the downtown, other than to come into work. It’s an uphill battle to sell a vehicle in the downtown marketplace versus somebody that’s in a residential area. If I’m going to leave work, I’m going to go home, grab the kids and go car shopping as close as I can to my house.”

When Edmonton Motors moved from downtown to Oliver in 1955, it was then on the outskirts of Edmonton, Wolfe says. The city has risen up all around it ever since, and that has made life difficult for the dealership. “As far as the way it’s going right now, Edmonton’s downtown is expanding,” Wolfe says. “With the land values the way they are, there’s two dealers left downtown. We can’t expand, we have no place to go. I’m sitting on two acres and I need eight. I’m renting property, and space in the Healy Building, to store my units.” In 2008, a small church to the east of Edmonton Motors was knocked down and the company now rents the land. But Wolfe says it’s not enough. “There’s no place to go downtown anymore, and it’s getting smaller. If you take a look at what [similar] land is being used for, it’s for a high-rise. That’s eventually what’s going to have to happen.” 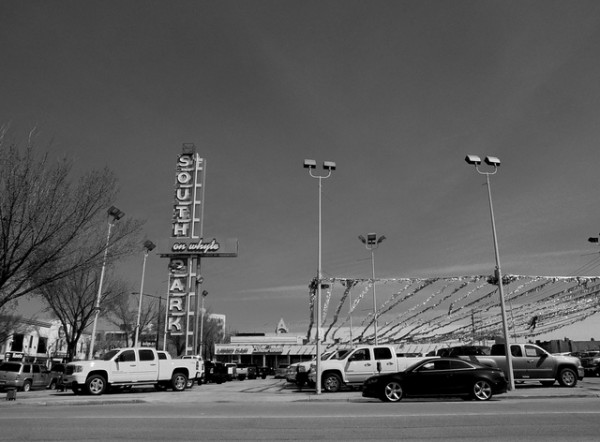 But Will Wheaton sees the future of the urban car dealership differently. Wheaton is the son of Don Wheaton Sr. (who died in 2012), whose iconic Chevrolet dealership has been on Whyte Ave. since 1961. Wheaton says Don Wheaton Motors has learned to live with its space restrictions over the years, yet concedes land costs are an issue. To build a car dealership in a downtown location, Wheaton says, would be difficult today thanks to land scarcity. And because car customers walk in and want a certain model in a certain colour, right now, space for inventory is a car dealership’s most critical resource. While Wheaton’s flagship dealership on Whyte – self-conscious of its throwback vibe, with its 1960s  muscle cars in the indoor showroom and 1950’s stylized neon signs – isn’t going anywhere, he says that’s made possible in the same way that Wolfe does it, through using car storage lots. And later this year, Sun Toyota, a used-car dealership that Wheaton owns on a less central area of Whyte Ave., will retreat to a more suburban, car-focused area along Calgary Trail, where space is easier to come by.

Still, Wheaton is far from giving up on the viability of an urban car dealership. “I would view that the downtown now, with the development we’re seeing – more density through condos and everything else – there’s probably a trend for people moving into the core,” he says. “So the prospects [for a downtown car dealership], in my view, are better than they have been.”

Tim Querengesser is the senior editor of Alberta Venture magazine and the head of The Edmonton Wayfinding Project.