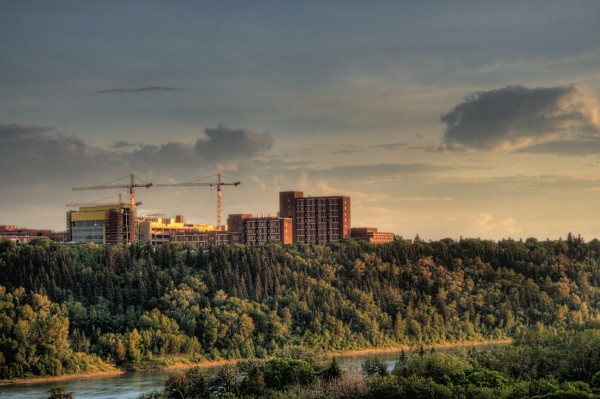 University of Alberta overlooking the North Saskatchewan. Photo via WinterforceMedia

Academic institutions have an interesting relationship with cities. While campuses across the country strive to develop a nurturing bastion from external forces, the spin-off effects are well known and desirable for the cities they call home. This includes a low-standard student population happily occupying scummy apartments, buying food they don’t have to cook, and nursing ungodly amounts of caffeine.

At least that’s the hope of a lot of us exhausting urban snobs. However, the reality  is tragically more complex.  Knowing that the people reading this are likely more educated on the subject than I am, I will submit that my opinion on the matter is a reflection of my own cultural understanding of life and economy as a broke student in Edmonton and Toronto.

My academic career took me to three universities where I quickly established a favoured escape route for any given day of the week. Whether my brain was fried from lectures, studio assignments or soul crushing boredom, the act of leaving campus offered a mental respite. If I’m honest, it was pretty much always just boredom, but hey, apathy towards education is pretty essential to the modern university experience (isn’t it?).

Regardless of the motivation, students, teachers and support staff come and go en masse over the course of any given day. The way that this traffic relates to the surrounding  city has a direct impact on not only the local economy, but also on the overall impression that a locale burns into the brains of its most transient citizens. This impression goes a long way in cultivating a school and city’s reputation as a (good or bad) place to live, work, and create.

My casual observations on the subject feel like a no-brainer, and yet I have struggled to come across many  instances where academic institutions and cities have collaborated for the sake of the city building. In downtown Toronto, Ryerson has cultivated a reputation as a “city-building university”, backing the statement up with landmark projects such as the energetic School of Image Arts or the adaptive Mattamy Athletic Centre (former Maple Leaf Gardens). Both follow the trend of incorporating non-typical private uses, such as Balzac’s Coffee Roaster and a Loblaws grocery store. 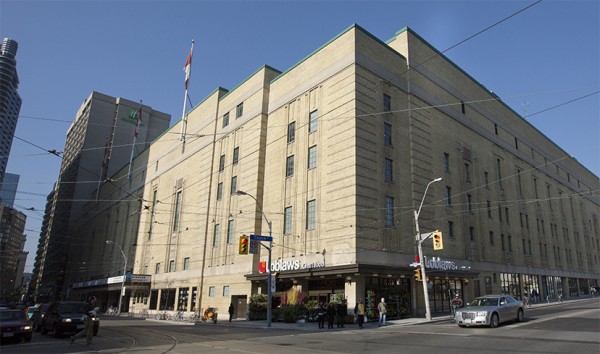 While projects like these may not build a city on their own, they demonstrate an awareness of the dynamic created when more interesting development opportunities are realized. They create quasi-public spaces that drive the sort of pedestrian flow that is essential for entrepreneurs to create viable and interesting uses between destinations. And in that way they become a destination in their own right.

This academic-sponsored pedestrian flow can be seen around most major campuses in Canadian cities, including the Garneau and Strathcona neighbourhoods in Edmonton. In a way the area has succeeded [almost] despite the University of Alberta’s presence. That’s not to slight my alma mater, but simply to underscore the fact that their campus developments have generally responded to their urban context in the same way they have for the better part of the past decade: inclusive for students, exclusive for the public.

While several nearby high-profile buildings are presently being constructed, few offer any opportunity to embrace and enhance the existing urban fabric. Campus retail spaces, where sporadically developed, are generally inward facing and exclusive to the student population. Landmark structures relate to the immediate streets but not to existing retail or residential developments in the area.

In comparison, at Ryerson University, the urban amenities stitch into and around the campus and were all too convenient for me to justify returning home right after school. I could scarf a shawarma, refill a cuppa, and actually remain on campus to socialize with colleagues and continue working on things actually related to school. In my experience, the urban fabric in and around the school fostered a superior environment to get the most out of my tuition. And it sure didn’t hurt Ali Baba’s Middle Eastern Cuisine either.

The success of Ryerson’s recent urban expansions is, in my opinion, something to be emulated for the sake of a healthy campus and city. The motivation for such developments were likely premised on the market dynamics of downtown Toronto, where a baseline level of urbanism is a need rather than a want. It also doesn’t hurt that former polytechnic schools such as Ryerson seem to be going for flashy expansions as a means of accommodating the growing demand and competition for post-secondary credentials and prestige.

Whatever the driving factor may be, universities may glean much from the experience of their pupils. The daily grind of the student is not something I will forget, and is certainly a major topic when offering my two bits to those looking for advice on  choosing schools. As an exhausting urban snob, I am no doubt biased towards the experiential quality schools offer prospective students. And I don’t think that I’m alone in that. If that’s true, then schools could do a heck of a lot better at ensuring a legitimate connection to the cities in which they inhabit. 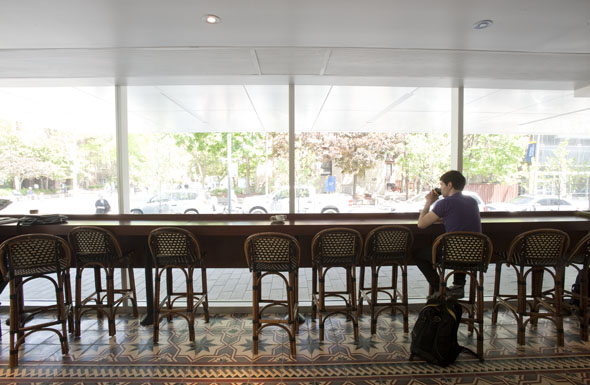