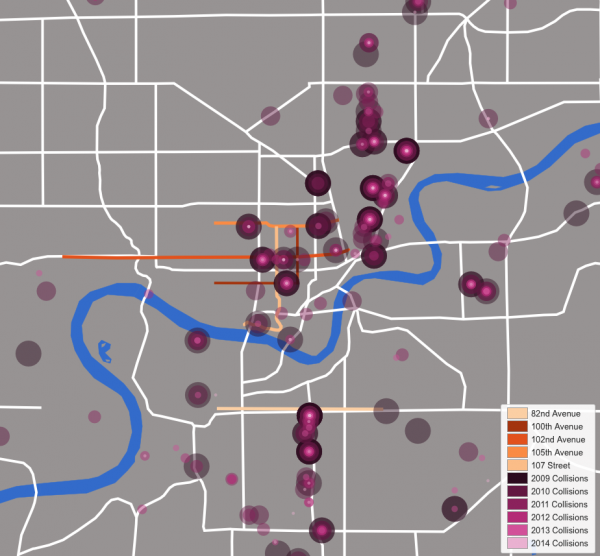 On November 26, 2014, the Edmonton Bike Coalition presented to Edmonton’s City Council in support of the creation of a core network of bike lanes. To understand more about where the bike lanes should go, I asked the City’s Transportation Department if they had a comprehensive list of bike collisions. They forwarded me a data set with over 1000 bike related collisions from 2009 – 2014. The complete and original data set can be found here, on Google Drive. I encourage you to download it and have a look.

When I looked at the spreadsheet, I could see that there were eight fatalities and 1096 injuries during the almost 6 year period. To further the analysis, I geocoded the data using Cartographica, and put this data on a map of Edmonton that included the core bike path network under discussion (See bike-car collisions figure).

There are some problems with this map. The data provided by the City described the bike collisions by the nearest cross street, which means that the data is displayed on the map as a rough grid, and if two or more accidents occur on the same block they are spatially identical to the geocoder. As such, collision locations on the same block are overlaid on the map, but may not have actually occurred at the same point as any other collision in any other year.  All we can conclude by the overlaid points is that those collisions occurred somewhere on that block.

Looking at the map of downtown, it seems that we can predict where bike accidents will occur. For instance, there are clusters of accidents on the same block on 100th Avenue, 109th Street, 106th Street and 104th Street.

The Whyte Avenue map, on the other hand, indicates that a bike lane on 83rd Ave might not prevent accidents. Since 2009, there have been no bike collisions on 83rd Avenue. Rather, from this analysis, it seems that a north/south bike lane on Gateway Boulevard and Calgary Trail would be of greater benefit.

On the other hand, Tyler Golly who is the General Supervisor, Sustainable Transportation at the City of Edmonton notes that:

“…the purpose of the (83rd Avenue) route is to have a high quality east-west cycling route to serve the many destinations along Whyte Ave, to get people to/from the University and to/from existing north-south routes like Mill Creek Ravine….we know people will ride one or two blocks out of their way if a good bike route exists. So, for 83rd Avenue, we really need to consider Whyte Ave (82 Ave) and even 81 and/or 84 Ave because a route along these corridors will attract riders that are currently using other routes. So, the 83 Ave route doesn’t exist because of collision history along 83 Ave but rather to provide a safe route because the data shows numerous collisions along 82 Avenue.”

These are my initial conclusions, however there are problems with my analysis. The geocoder that I used did not include all of the data points from the original file on the final map, and I don’t have the skill to find those points not included (other than a laborious manual search).

While the analysis is somewhat suspect, it does raise the following interesting questions that might be addressed with better geocoding and data validation (and with more people looking at the data):

This process of obtaining and mapping the data has also raised some transparency issues, given the City of Edmonton’s commitment to open data. Specifically why does the Edmonton Police Service (EPS) not capture and report accident data with a GPS and coordinates. Furthermore, why does the City of Edmonton ‘Mid-Block Collisions‘ open data set only document a small fraction of these collisions? For instance, the 2010-2011 dataset that I linked to has only 16 incidents, while the data released by the Transportation Branch has 323 incidents for the same time period.

It is imperative that the City of Edmonton release full (rather then partial) data sets. Data sets that are discovered to be partial erode the City’s credibility within the open data community and subtly call into question all other data sets (Are they complete? Has the data been manipulated?). If the City of Edmonton and its citizens are to fully realize a partnership in the creation of public policy, then we should all be working with the same data.