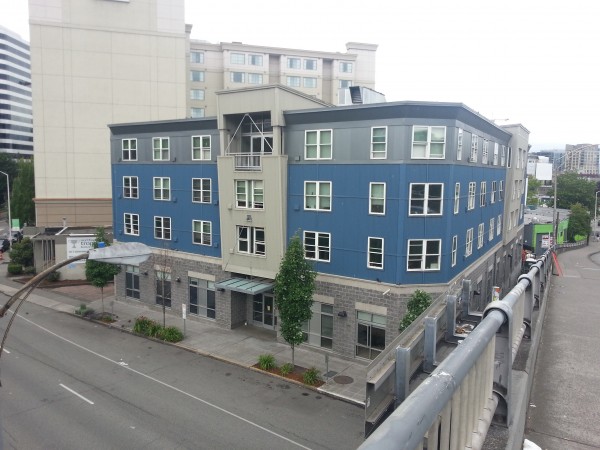 1811 Eastlake in Seattle was the first in North America to set up a home where chronic alcoholics could continue to drink without being kicked out. Photo by Dorota Strzelecka.

Originally published in the winter 2014 issue of The Yards. Written by Scott McKeen.

Mental illness is not a crime. Not a moral failing. Not the result of weak character, cowardice or lazy streak. Not a teary fiction foisted upon society by sissy liberals.

That’s why I’ve made mental illness my city councillor initiative, and its first proposal is a managed alcohol facility for chronic street alcoholics. The idea is harm reduction. So you provide a home for these people, with all the professional supports you’d find in other facilities, and a drink every hour or so.

What does alcohol have to do with mental illness? Clinical research reveals an alcoholic brain is  wired differently. Sober, it does not provide enough of the happy or calming chemicals that the “normal” brain gives to protect and uplift people from a challenging life. Thus, the alcoholic drinks to feel better. Unfortunately, the use of alcohol, a depressant, unleashes a downward spiral of lonely, obsessive self-medicating. There might be a genetic component, but research now points to trauma or neglect in childhood as a cause of skewed brain development.

I grew up in an alcoholic’s home. My dad was the sweetest man, with underlying depression and anxiety issues he “treated” with alcohol. His descent and then resurrection through Alcoholics Anonymous is the greatest story I know, but it doesn’t work for everyone. There’s a need for something different.

Imagine a child living in squalor, whose parents are neglectful and abusive. Imagine that child crying on his walk to school, hungry and unwashed.

Now imagine that child 20 or 30 years later, staggering drunk and dirty, in front of the Stanley Milner Library. What is our reaction?

Sadness and empathy? Or sanctimony, and disgust?

We can do better by these damaged, vulnerable street alcoholics, whose lives are third world at best. Our fellow citizens need our help.

I’m not a bleeding heart. I believe in personal responsibility and citizenship. So in my vision of an Edmonton facility, residents will not be able to drink outside of it, or cause any sort of crime or disorder.

Managed alcohol facilities exist in other cities across Canada. The best of them make significant and positive impacts on the lives of their residents, as well as the downtown community.

Make no mistake—street alcoholics live horrific lives. They are often desperate enough to drink hand sanitizer or alcohol-laced cleaning products. If they can get a bottle of booze, they might drink it as fast as possible, so as to not have it stolen or seized by police. So they pass out on public streets. Paramedics are called.

Often, they’re taken to an emergency room and may stay in the hospital for a few days. According to the Edmonton Homeless Commission, one chronic street alcoholic can cost the system $100,000 a year. We can do better. We can save money, free up police and paramedics for other priorities. We can remove much of the social disorder from our streets. We can protect vulnerable men and women, who were once sad little boys and girls, from pathetic lives of misery.

Scott McKeen (@scottmckeen) is a veteran reporter and rookie councillor for Ward 6.