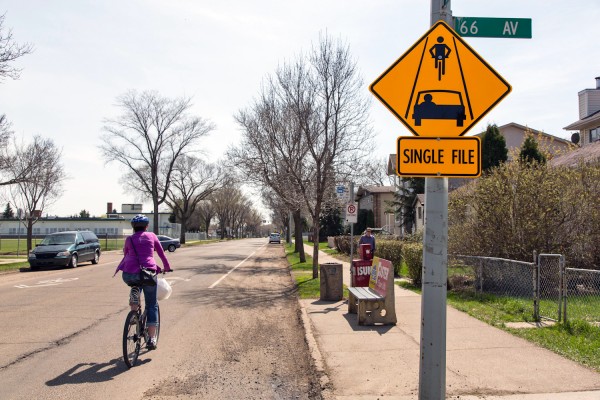 Drivers need to chill out and share the road (funding) with pedestrians and cyclists. Photo by Tom Young.

A recent opinion piece in the Calgary Herald claiming that the City of Calgary  is “ignoring the plight of drivers” reiterated the common distaste for money being spent on active transportation (walking, cycling and other self-powered methods of transportation). Here in Edmonton, the complaints in recent years against the City’s implementation of the bike lane network have typically been accompanied by grousing that millions are being spent on infrastructure that no one will use while potholes remain unfilled. Quoted costs per kilometre for various types of cycling facilities have usually been met with outrage at the apparently vast sums being devoted to what is seen as a special interest. Their conclusion is that there is some kind of “war on cars” underway, with drivers losing ground fast.

The problem with these dyspeptic sentiments? They bear little relationship to reality.

The actual context of funding for non-automobile transportation in Edmonton is that while transit has seen significant infrastructure investments in recent years, walking and cycling funding has been minuscule, and transit, walking and cycling funding combined has amounted to less than half of the funding provided for the construction and maintenance of roadways in the city once provincial investments in highways are factored in.

In November of 2014, City Council approved the 2015-2018 Capital Budget. Analysis of the funded projects for this four-year window shows that the lion’s share of the transportation-related funding in the Capital Budget goes towards transit and roadway investments. Just over half, $1.2 billion, is dedicated to transit infrastructure such as renewal of the West Edmonton Mall Transit Centre, funding of the Smartcard and Smartbus programs, and the biggest of them all, the design and construction of the Valley Line LRT. Road projects come a close second with total funding of $1.06 billion, including projects such as the widening of Whitemud Drive, renewal of neighbourhood roadways at a pace of about five neighbourhoods per year, and the construction of the Walterdale Bridge. A distant third, with $82 million, are mixed projects that produce some active transportation benefits along with roadway expansion or renewal, such as the redesign of Jasper Avenue in Oliver and Downtown, and the construction of new roadways in the vicinity of Stadium LRT Station intended to support mixed use redevelopment in that area. In an even-more-distant fourth place is dedicated active transportation funding, with only $35 million over the four-year budget cycle, constituting 1.48%. 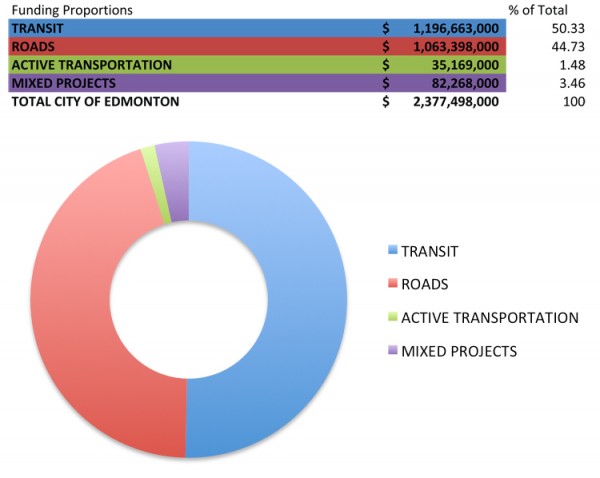 When we factor in highway funding provided by the Province for the 2016 completion of the northeast leg of Anthony Henday Drive, a whopping $1.81 billion investment, the skew towards roadway dollars in capital budgets becomes much more pronounced. Transit drops to less than 30% of the total, mixed projects to less than 2%, active transportation to a minuscule 0.8%, and roads and highways shoot up to a whopping 69%. 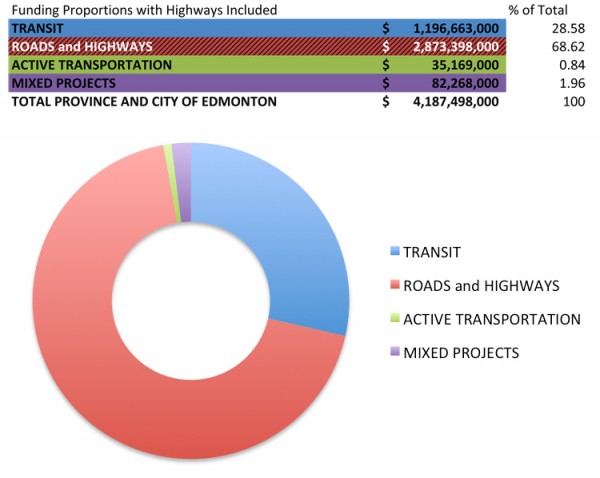 The 2011 National Household Survey reported that 1.4% of Edmontonians used cycling as their main mode of transportation to work, and 4.6% walked. These appear to be modest numbers, but the practice of asking people’s main mode of transportation to work conceals many people who may drive or take transit three days a week but walk or bike the other days. It also gives no voice to trips taken for non-work purposes, which are a substantial and uncounted proportion of the total. A recent assessment by Urban Systems of cycling behaviour in Edmonton points in this direction, discovering that although it is not usually their dominant travel mode, 54% of Edmontonians ride bikes, 35% ride at least once a week, and 65% of all riders use their bike for more than just recreational purposes. It can be assumed that pedestrian trips for non-work purposes are also higher than 4.6% of the total, numbers which will hopefully be revealed by the Edmonton Household Travel Survey due to be undertaken by the City later this year.

Yet despite these considerations, active transportation comprises a mere 1.48% of the Capital Budget, a percentage which by any measure is substantially less than the combined 5.99% proportion of trips for active transportation. And the $1.06 billion dedicated to roads by the City of Edmonton over the next four years, the majority of which is for renewal rather than growth, helps dispel the idea that our roads are being left untended. The big challenge with our roads is not current investment, but that they were chronically underfunded throughout the lean years of the 1990s and early 2000s. That historical disinvestment has resulted in the present need to rebuild the streets from scratch in some neighbourhoods, a more expensive and time-consuming process. Substantial investments in reconstruction and maintenance are being made now, rising steadily since 2006. But with over 300 neighbourhoods in Edmonton, it will take time to catch up.

In the meantime, Edmontonians might benefit from a bit of perspective. When prices per kilometre are quoted for cycling investments, it is worth asking about the equivalent cost of roadway infrastructure. The 2015-2018 Capital Budget provided $4.3 million for the 3-kilometre 83 Avenue Bikeway parallel to Whyte Avenue, a per/km cost of $1.4 million. This is a significant budget for a cycling project and will create protected bike lanes, a type of infrastructure never built before in Edmonton. Less complex cycling infrastructure such as thermoplastic reflective lanes can be built for substantially less, and are appropriate in cycling corridors anticipated to see less use than the already-busy Strathcona-Garneau area.

By comparison, the 3.5-kilometre, $33.3 million widening of Whitemud Drive between 66 and 34 Streets works out to a per/km cost of $9.5 million. This is seven times as costly as what will be Edmonton’s classiest cycling infrastructure. Will more than seven times as many drivers use the new lanes of Whitemud as cyclists on the new bikeway? Probably. But the entire four-year capital budget for all active transportation projects in Edmonton is equivalent to this single freeway widening project. With such a tiny proportion of dollars going to active transportation, is it really worth getting our seat belts in a twist over?

Tom Young is an urban planner and editor for Spacing Edmonton.