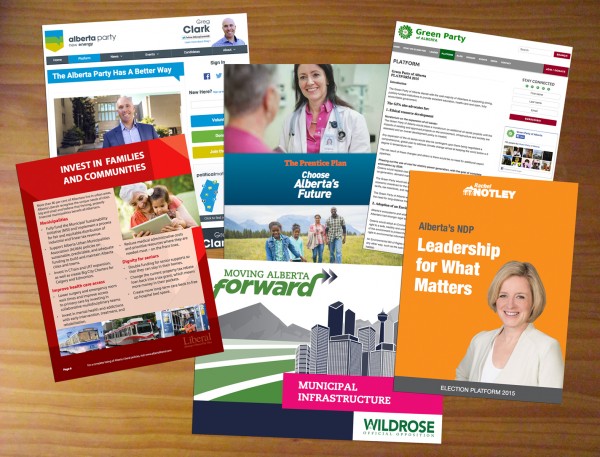 Alberta's 2015 provincial election is on May 5.

With just one week left in the 2015 race for the Legislature, Alberta’s provincial election has shaped up to be an exciting contest. Budget questions were the excuse for dropping the writ, but the state of the province’s finances is not the only issue worth debating. Urban areas are home to 83% of all Albertans, and the two metropolitan regions of Edmonton and Calgary are home to 2/3 of us. Certainly the core provincial responsibilities of health and education are of great benefit to the cities, and environmental questions affect urban and rural alike. But cities have unique needs, and funding for infrastructure and policy tools continue to be lacking to address such challenges as homelessness and affordable housing, regional growth coordination, public transit infrastructure (including the increasing need for regional services, particularly in Edmonton), urban policing, and built infrastructure from libraries to bridges to recreation centres and fire halls.

So what have the parties made of this chance to communicate their deep understanding of urban needs? I combed through each of their platforms to see what ideas were on offer.

After 44 years running the province, you might think the PCs would have a pretty solid handle on the needs of municipalities. Here are their commitments to urban issues:

This is a pretty concise list. It isn’t clear precisely how the PCs intend to partner with Edmonton and Calgary. The City Charters are a wonderful concept, but their value is still open to debate, given that it is not yet clear what new powers the provincial government intends to permit the big cities to have. The charters were agreed to in principle in 2012, and have moved forward glacially ever since. With respect to infrastructure funding, the PCs seem to think that transportation is distinct from transit, which is a bit odd. Specific funding commitments in the platform document identify $6.7 billion for various specific highway and ring road projects, and a commitment to creating a plan to create “sufficient road and transit networks” across the province. What “sufficient” might entail isn’t made clear.

The Wildrose identify Municipal Infrastructure as a specific plank, but unfortunately this doesn’t mean that they cover more ground than the PCs. Their commitments are to:

They also lump provincial infrastructure priorities such as schools and highways under their “municipal infrastructure” banner, so what appears to be a commitment to urban issues is more of an affirmation of their commitment to core provincial responsibilities. Without specific budget numbers to comb through, we just have to trust their claim that their formula would increase funding. The fact that their only clear commitment to transit infrastructure would come in the form of 10% of budget surpluses is hardly inspiring, however, considering that the Wildrose Party seems allergic to taxation and would presumably aim to limit surpluses as much as possible.

For a party with its core support in Edmonton, and hoping for breakthroughs this election in Calgary and smaller cities such as Lethbridge, you might think that the NDP platform would have given some serious attention to municipal issues, but it is thin on details. Their commitments are as follows:

The addition of affordable housing to the list of considerations is welcome. The use of “stable, predictable funding” and “infrastructure priorities such as transit” in the same sentence also seems somewhat promising. But specific language sketching out a proper vision for the role of the province in supporting municipalities is not present here. The supportive but vague language regarding City Charters also does not seem to move the yardstick much beyond the as-yet-unrealized promises of the PCs.

Like the NDP, the base of support for the Liberals has traditionally been in cities. But their platform, as with all of the parties thus far, is disappointingly short on attention to municipal issues, though it does suggest one concrete idea that the front-running party platforms do not:

The interesting idea in the Liberal platform is the reference to “fair and equitable distribution of industrial and linear tax revenue”. There has been some debate in recent years about the distribution of tax revenue from rural industry and linear infrastructure such as pipelines. Rural counties take a much larger proportion of these types of taxes due to their large land area, and yet have significantly fewer taxpayers to spend it on. Although roads are a huge expense in rural areas, other services such as policing, fire, recreation and social services are much less intensive than in urban areas, so many counties have healthy balance sheets while urban municipalities struggle to keep up with demands. The suggestion by the Liberals that the current distribution of these tax revenues should be reconsidered is provocative, though it seems unlikely to help get them votes in rural areas.

Parties still trying to get a foothold on the political scene have the opportunity to make bold policy statements to grab the attention of potential voters, but the Alberta Party has not been terribly bold where cities are concerned, with several of their policy planks being vague reiterations of what the main parties are offering:

The commitment to using debt to pay for infrastructure appears distinct from the other platforms, but only because other parties didn’t bother to state the obvious. With the possible exception of the Wildrose, who have identified that some infrastructure should be paid for through budget surpluses, most parties understand the need to use debt to finance large-scale infrastructure projects. So apart from a specific commitment to flood mitigation in southern Alberta, this platform doesn’t seem to have any new ideas for cities.

Contrary to the Alberta Party’s platform, the Green Party definitely takes the opportunity to make some waves, talking about municipal issues and ideas that no other party even hints at. With the party’s aim to pursue carbon footprint reduction and social equity, they offer the following platform items that would have significant implications for cities:

This platform is ambitious and shares essentially nothing with any of the other parties, presumably because it is rooted in concepts of social and environmental sustainability, which the other parties make little mention of. The practicality of some of their ideas is up for debate, and the application of many of them would no doubt cause an uproar amongst municipal governments who would see such policies as an incursion into their realm of influence. But it is interesting that the Green Party’s platform is the only one that gives significant and specific attention to ideas pertaining to the urban milieu.

It is clear from these platforms that urban issues have not been a primary focus of this election. An April 26 column by David Staples, where he poses questions to party leaders about urban infrastructure such as LRT, indicates that all main party leaders support LRT investments, and casts a bit more light on some of the platform items identified above. But one article does not a priority agenda make.

With both Edmonton and Calgary beginning to take on the characteristics of distinctly urban centres, and the continuing need for infrastructure to catch up to growth that has been underway for over a decade now, this is a missed opportunity to debate questions of daily interest to a majority of Albertans. If you come across one of your candidates between now and May 5, it may be worth asking the question: “So, what are your thoughts on cities?”