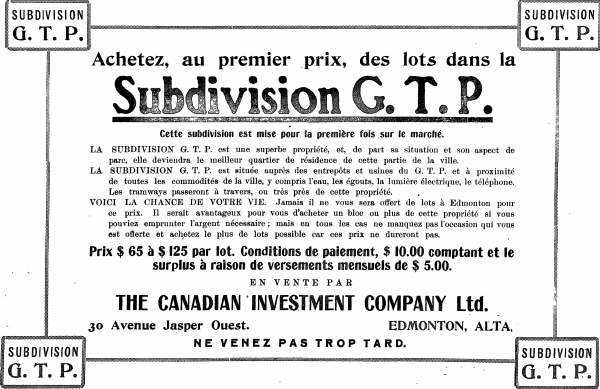 For a short time, about a century ago, Edmonton was the home to the only French language newspaper in western Canada. The paper, a weekly called Le courrier de l’ouest, ran from 1905 to January, 1916. It had its fair share of real estate advertisements, covering an impressive range of rural and urban land and development across the west. Some of the largest and most impressive spreads were announcements for the sale of lots in new subdivisions.

In Greater Edmonton, including Strathcona, how were subdivisions promoted to francophones? Almost entirely in French, as it happens. Only one ad out of the 322 placed over the decade was in English. One ad could be considered to specifically take into account francophone interests, in highlighting the proximity of the lots to a catholic college. The others were direct translations from English. The English versions could be found in the English language papers of the time, such as The Edmonton Bulletin.

This tendency was very different from other centres in the region, such as Morinville, Beaumont and Vegreville. Ads for subdivisions in those towns frequently addressed francophones directly and emphasized the linguistic and religious characteristics of the communities. 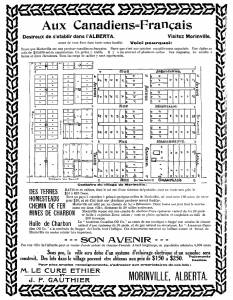 The most frequent selling point for Greater Edmonton, used in 50% of the ads, was the increase in value of the lot. Edmonton Real Estate Co., in an ad for lots in Norwood, encouraged the reader to “buy several, as they acquire value from day to day.” L. Arsenault reminded readers of the days they could buy lots in Capital [sic] Hill, Glenora and Jasper Place for $400 to $800, lots that at the time of the ad were selling for $800 to $2500. Lots in Dufferin Place, the ad stated, were going to increase in the same way, so the reader should take advantage now. A significant number of ads were unabashedly aimed at speculators.

The second most popular selling point, at 35%, was elitism. McIntosh & Chavin assured the reader that Sherbrooke and Woodcroft “are destined to become the fashionable neighbourhood of Edmonton.” L. L. Pearce stated that their lots for sale in Garneau were “immediately adjacent to those bought by Premier Rutherford and Dr. Tory, President of the University.” Gouin, Palmer & McIntyre inquired, “Are you looking for a site to build that is at the same level as your social position?” They suggested that you looked in Riverview.

The third, at 26%, was that the lots were “high and dry”. This is surprising since, while intermittent flooding was on record as an ongoing concern since at least 1830, major development in the North Saskatchewan River Valley was not deterred until the 1915 flood. One might have expected that the fourth selling point, views of the valley (19%), would have been more significant up until the flood. No ads were placed after the flood, with the boom fading in 1914 and the newspaper folding at the beginning of 1916. We will never know what impact the flood may have had.

The lots being sold were undeveloped and had varying levels of utility service. Regardless of the interest of the francophone reader, they were the most prominently advertised real estate. Neighbourhoods were promoted on general principles of wealth, exclusivity and stability, just as they were in the English language newspapers of the time.