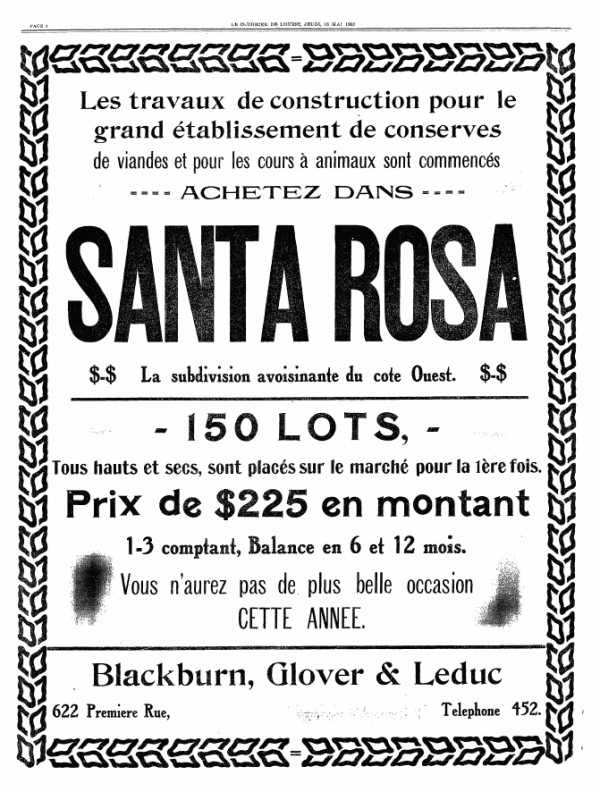 The period of 1905 to 1915 was an eventful time for Edmonton and, up until the 1912 annexation, Strathcona. The French language newspaper of the time, Le courrier de l’ouest, captured much of the excitement, all the while expressing trepidation about the future of the francophone minority in the new province of Alberta. Advertisements for lots in new subdivisions in the paper were understandably enough uninterested in francophone issues.

The ads did reference improvements of the time, with a focus on future tangible development. The creation of the province of Alberta and the establishment of Edmonton as its capital in 1905 held little interest. The subsequent annexation of Strathcona, on the south side of the North Saskatchewan River, and North Edmonton in 1912 was also not worth mentioning.

The railway lines, and associated industrial development, were the most frequently mentioned improvement. This was partially because land owned by the Grand Trunk Pacific Railway (GTP), whose line was constructed in Edmonton in 1909, was being sold for residential development at the time. Ads for other neighbourhoods and referring to other railways were also printed. The focus was typically the “thousands of men” the railway would be employing and the fact that “railway employees generally owned their own house.” When the warehouses and other facilities were fully built out there would be a strong market for adjacent residential lots. If that was the case, however, one might wonder why GTP did not sell its land directly to employees. 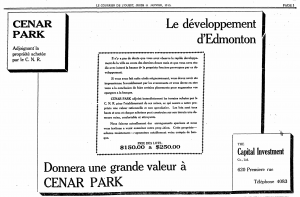 The construction of the University of Alberta, starting in 1908, was also quite prominent. Most references to the institution were limited to a vague statement about the lots being in close proximity. The most prominent ad, which ran nine times in 1909, went into more detail. It mentioned “the immediate start of the work to construct the permanent buildings.” What was important was the physical development to come.

The municipal improvement that received the most attention was the tramway. Starting in 1908, a tramway system served both Edmonton and Strathcona. Thirty ads mentioned the tramway, all between 1909 and 1913. The minority concerned lines already built. Most ranged from stating that the tramway was going to be built close to the lots or through the subdivision to saying that “negotiations have started to obtain a tramway line on the property.” 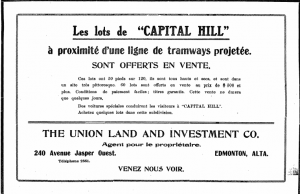 Out of the 322 ads selling lots in new subdivisions, 154 mentioned existing or future improvements. The improvements were generally linked to exclusivity, the university, or appreciation of the value of the lots, industry and the tramway. The agents that included such details preferred specific, forward-looking development that differentiated their subdivision from others in the Edmonton area. Competition with the numerous subdivisions outside the Edmonton area seemed to be secondary.

Ads that did promote Edmonton as a whole kept to increases in population and land values, undoubtedly more straightforward than the effects of becoming a provincial capital and annexation.