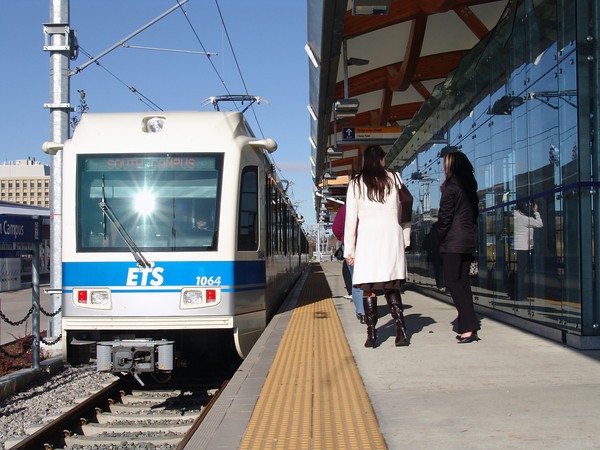 South Campus LRT. Photo by the City of Edmonton

Edmonton in many ways has been a public transit pioneer in North America; most importantly through the introduction of North America’s first modern LRT line in the late 1970’s as well as the innovative use of pulse based transit timing focused on transit centres (ideal for a ‘newer’, relatively spread out prairie city). However, Edmonton Transit (ETS) and City of Edmonton administration have resisted calls for 24 hour service, in the belief that it would be underutilized and thus a poor use of financial resources. However, this choice restricts the mobility of those unable to drive and limits the choices of those who would rather not do so late at night or early into the morning. Most critically, the inability to rely on transit in the nighttime hours is a crucial reason why many choose to drive in the first place. Given that the City’s much publicized Transportation Master Plan calls for a major mode shift from cars to transit, the lack of a comprehensive and reliable night bus service threatens the viability of this strategy.

Even relatively transit-friendly city governments, willing to extend the LRT or expand some bus service, have been historically very unwilling to introduce any late night transit. It took heavy campaigning from transit advocates to convince Edmonton to begin the very limited Night Owl service that started on the Labour Day long weekend: where ETS routes 1, 4, 8 and 9; along with a Capital Line LRT replacement service, began running until 3:30 am, seven nights a week. 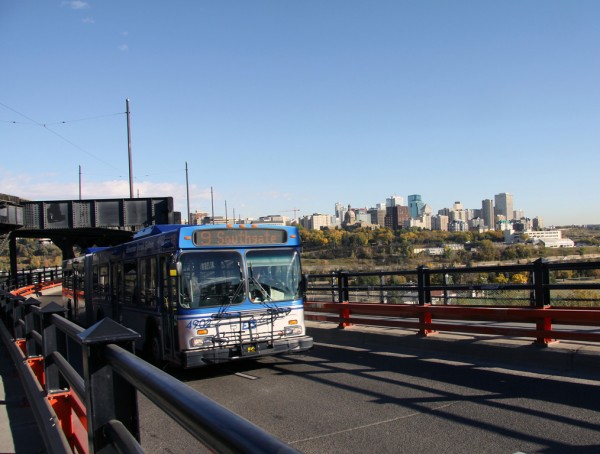 The 9 on the High Level Bridge. Photo by the City of Edmonton

Supporters of the night service point to the fact that here in the Alberta capital region we currently have a population of over 1.3 million; which has led to a city that works and enjoys entertainment options around the clock. Those with livelihoods dependent on shift work will certainly benefit from such service, according to such advocates; they are often financially unable to afford a car or to pay exorbitant cab fares to get to and from work. Another group that stands to benefit are those enjoying our city’s burgeoning nightlife; until now they have had no other option but to factor in extra dollars to the cost of their evening by taking taxis home (assuming, of course, that they can even find one on Jasper Ave, 124th Street or on Whyte Ave, for which competition can become fierce after midnight). However, in spite of the obvious benefit to these two populations, it might be hard for the average Edmontonian to see why late night transit service is a necessity. After all, most of us are snug in our beds at night; not out at 3:00 am.

Ultimately, building Edmonton into a truly livable urban centre will be difficult, if not impossible, unless public transportation can compete with the private car at all times of the day. For example, suppose that someone is deciding whether to take ETS or drive to a show at the Citadel Theatre. As things currently stand, they are more likely to choose the latter option as it will allow them to go for a post-show meal or drink without worrying about being stranded downtown after 12:30 am. The added comfort of knowing that transit service would be available to them and the convenience of not having to search for parking, pay for a cab, or forgo that drink are factors that are likely to influence auto travellers to choose transit for certain trips. Comfort and convenience would represent a form of travel time cost reduction if we were able to put a dollar value to these factors. Unfortunately, transit agencies typically only assign quantitative measurements, such as operating costs, to assess their operations. This represents a missed opportunity to improve the ride experience of passengers, of which available comprehensive night service beyond the scope of the initial pilot is an important part.

In addition to attracting choice riders, a full 24-hour transit network would introduce a measure of social justice for the industrial and shift employees that make up a large proportion of Edmonton’s workforce. These fields of employment often do not offer a living wage, making car ownership or cab rides prohibitively expensive. Allowing these employees to access their places of work via transit works to enhance the City’s equity goals in addition to improving the transit mode share.

With a comprehensive grid of 24-hour buses that goes beyond this September’s pilot, Edmonton citizens would be able to use ETS services for far more than just getting to work. Instead, transit could become the preferred mode for those working non-traditional schedules, going out on the town, visiting friends… the list is endless.

Toronto, Montreal and Vancouver all have well-patronized transit systems, the popularity of which is enhanced by the fact that users can board a bus or train knowing that they will be able to get home at any time of the day or night. Edmonton is already one of Canada’s great cities, with plenty to do and see, but our urban space and livability will remain compromised as long as the car continues to be the default mode of travel. Furthermore, excellent public transit is a boon to a city’s attractiveness as a place for inward investment from the private sector and its national/international reputation as a place to live long-term for mobile workers. The introduction of a truly comprehensive night bus service will go a long way towards changing our car-dependent reality and should be a key component of the City’s long term objectives, helping us build the vibrant city we know is possible. 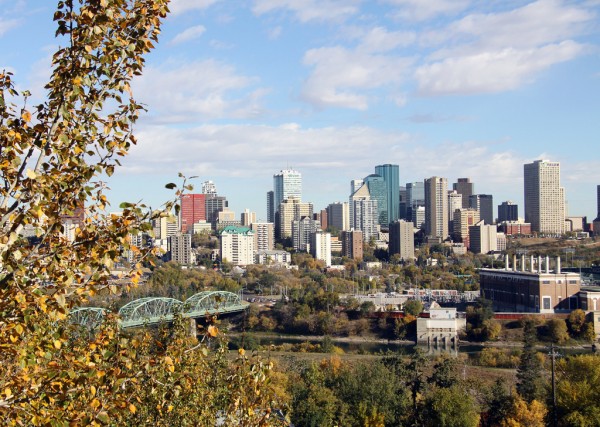 Downtown in the fall. Photo by the City of Edmonton