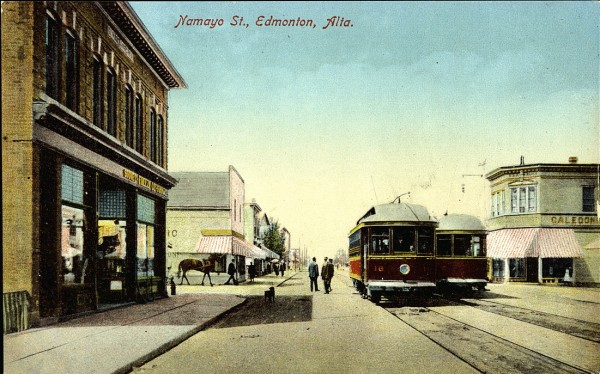 Namayo Avenue, which was changed to 97 Street in 1914. University of Alberta Libraries.

One of the significant challenges of the 1912 amalgamation of Strathcona and Edmonton was street naming. The two municipalities had incompatible yet overlapping systems that were simply unworkable. To rectify this, Council decided to adopt a controversial plan of street numbering in 1913 that has survived to this day. Omar Mouallem gave a great overview of the history of Edmonton’s road naming and numbering several years ago. What wasn’t covered was the failed 1915 petitions to change the system back – with whatever modifications were necessary for the old system to be coherent. Nor did it mention the spokesman for the petitions, C. S. Wallis.

Charles Stayner Wallis was a poster boy for the opportunities of western Canada. He was born in 1854 in Peterborough, Ontario and was educated as a lawyer at Osgoode Hall. He was called to the bar in Ontario in 1880 and then, a year later, in Manitoba. He practiced law for over two decades, eventually becoming the attorney general of Manitoba.

In 1903, he decided to leave that life behind and move to Edmonton. For the next seventeen years, “he carried out his widespread activities including the handling of enormous fortunes from England, New York, and almost every state in the union.” For much of that time, he was also the honorary secretary for the Edmonton Club, the local Rotary Club. In 1915, he started a trust company, Alberta Trusts Company Limited. Due to the declining economy, though, it lay dormant until the end of the War.

In 1919, a visitor to the Alberta Trusts office in the Union Bank Building could find “an enthusiastic band of military men in earnest consultation planning their day’s work for the Victory Loan.” Besides Victory Loans, the company acted “as an investment and financial agency, buying and selling bonds, loaning money on improved farm land security, and handling all branches of insurance.”

As is commonly the case, Wallis spent his waning years in British Columbia, passing away in Vancouver in 1938. He ultimately had a significant impact on the development of western Canada, both as a lawyer and as a financier. This context is useful when hearing his fiery rhetoric when he presented the fifty petitions against street numbering to Edmonton City Council in 1915:

Surely, 1913 was Edmonton’s unlucky year, and this numerical plague seems to have been the omen of bad luck and hard times. The sooner we divest our city of it and adopt a modest garb more becoming a Canadian city – one that believes it has a goodly heritage in historical associations as well as in industry and commerce – the better. To re-establish faith and confidence in our city, first we must endeavor to inspire interest and pride and earnestly try to establish Edmonton as a place notable amongst Canadian cities for its healthy, homely sentiments, and the loyalty of its citizens.

One might be surprised that Wallis did not find a way to blame Edmonton’s street numbering for Leopold Loyka’s famous wrong turn. Still, the focus on pride and heritage over a century ago seems familiar today. One of the main arguments against numbering was that “it stigmatizes Edmonton as a boom city”. Though the backlash against numbering came from a variety of quarters, the most vocal group in 1915 was made up of people like Wallis – people who were heavily invested in the boom that had just ended. These people did not care about the numbering as such, but rather were looking for signs of faith and confidence in a world that seemed to be falling apart.