School and park space in a new neighbourhood is typically acquired through the dedication of land. When a developer subdivides land, they generally provide 10% of its gross developable area for school and park use. The City’s Urban Parks Management Plan indicates that this turns out to be 9.5%, though “approximately 11-12% would be required if field and facility footprint sizes met current programming standards.” So, there is not enough land to meet recreation and education needs.

There are a number of questions that can be asked at this point. The legislation allows for a dedication of up to 15% under certain circumstances; why isn’t that option used? How can school sites be surplused if there is an overall shortage of land? The list is quite long.

I would like to focus on parking. Most recently built recreation centres are surrounded by a significant amount of parking. Although the architectural design of each centre is interesting and unique, they can’t completely shake their resemblance to a suburban mall. Essentially, vast parking lots are an indication that land is inexpensive, at least in relation to building a parking structure, and a reflection of patterns of use.

The Meadows Recreation Centre is a good example. It opened in 2014 in southeast Edmonton. 1092 parking stalls have been provided to serve the centre and the surrounding fields, covering approximately four hectares. This does not include parking for any schools to be built on the site in the future. 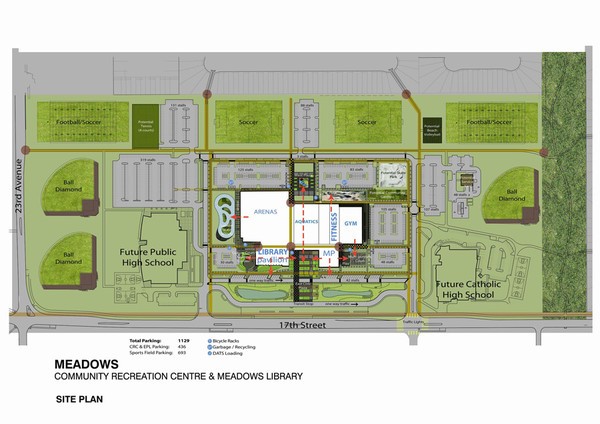 Silver Berry, the neighbourhood where the centre is located, has a gross developable area of approximately 179 hectares. Parking for the centre and associated fields uses 2.2% of the land that can be dedicated for schools and parks in the neighbourhood. If less land had been used for parking, there may have been enough to meet programming standards.

Recreation centres are intended to serve several neighbourhoods – five in this case – and host larger events. More people come from further away to use the facility than the average park. The sites typically have additional transit infrastructure, such as bus loops and transit centres, as well as multi-use path connections. At the same time, most centres are in the suburbs. The reality of suburban Edmonton is still dominated by the car. Since they are intended to serve the whole community, providing ample parking, along with transit and active options, is understandable.

It is also a choice. Dedicated land is effectively free for the municipality and for taxpayers, whether it is for roads, utilities, parks or schools. The funds to construct a recreation centre or to purchase additional land largely come from general tax revenue. Surface parking is far less costly than a parkade. The current model is to provide abundant parking in the least expensive way possible and to not spend the money to buy extra land to meet programming standards.

One obvious way to make the model work is to reduce the programming standards. It is not as if the current standards can be met in any case. Even if the parking for recreation centres was completely eliminated, the standards could not be met for all neighbourhoods with 10% dedication. The standards may reflect real community needs, though, and reducing the parking areas would bring the City closer to meeting them.

Parking is, after all, also a community standard. The parking requirements were met in The Meadows. This may be a good thing; the community may be better served with more parking and fewer recreation facilities. It may be a good thing that money was not spent on a parkade, since there might have been better uses for it elsewhere. These trade-offs should be presented clearly, though, so that the community is aware of the choice being made.