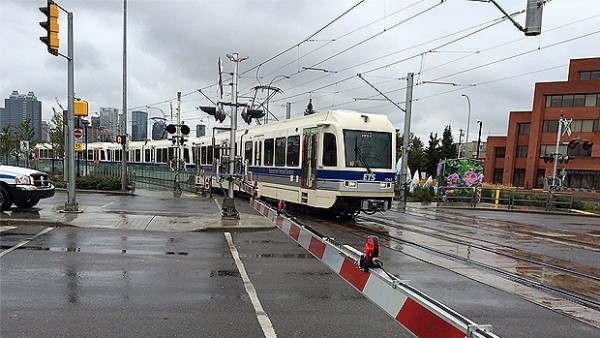 By now, the failures of the Metro Line LRT extension are well known. Originally slated to open in early 2014, the line only began service this past September, with running speeds limited to 25 km/hr. This article will not analyze the reasons for this delay, as the relationship between City transportation staff and the signaling contractor Thales continues to be acrimonious and blame can’t be assigned with any accuracy. Rather, I want to look into the hyperbole and anti-transit rhetoric surrounding the perceived traffic delays/inconveniences that many assume to have arisen in the aftermath of the line’s opening.

The imperfect Metro Line implementation, including the snail’s pace of construction and slow running speeds during operation, are certainly grounds for legitimate criticism and this article will not try to defend these deficiencies. However, if one looks at the more recent media coverage of this service, someone unfamiliar with Edmonton would assume that the new LRT was put in place solely to inconvenience drivers. Headlines such as “Metro LRT to cause major traffic delays”, “City’s LRT plans will only make congestion worse”, “Rush hour traffic delayed up to 10 minutes by Metro Line LRT” paint a picture of snarled traffic, frustrated commuters and an intolerable burden placed on the city. However, is the situation really as grim as all this or are local media outlets too focused on the reported frustrations of motorists, reports that may not be accurate in the first place?

Reading through the coverage surrounding the Metro Line, it’s immediately striking how much ink is spilled describing the driving experience, as opposed to any major spotlight on transit riders or the potential city building benefits of a new rapid transit line: stories almost entirely focus on reported wait times for vehicles in the vicinity of Kingsway Mall and NAIT. Breathless descriptions such as “City councillors were stunned when they learned…..that vehicles could be delayed up to 16 minutes during peak hours at Princess Elizabeth and 111th Avenues” and “Drivers can expect to sit behind the wheel and watch the light change from red to green four times before they clear the intersection” fill the bodies of the articles listed above. It’s important to note that these wait times are not based on a scientific study, rather, they are the perceptions of drivers previously used to the (generally) car-oriented infrastructure of our city. In spite of this, you can clearly see that criticism of the new LRT is almost completely focused on these perceived motorist delays.

Admittedly, in amongst all of the driver-centred criticism of the line, there are some notes of concern for how the Metro Line problems have affected transit riders, especially the effect on heavily used bus routes 8 and 9 in the Kingsway Transit Centre area where the Journal reports that ETS has been adding extra vehicles to keep the frequency reasonable throughout the entire route. Indeed, the slow speed of the current service is a very real concern that threatens Edmonton’s goals of boosting alternative transportation and should indeed be highlighted for the general public. However, concerns facing transit service are few and far between when compared with the laments of motorists reproduced in Edmonton’s local media.

This is not to say that there are no delays for motorists at all. A city report on this issue in October 2015 reported that while a few 10 minute waits did take place, they were not the norm and were at the very upper end of wait times. No one wants to see undue hardship placed on motorists, but with studies showing wait times for the train that are often much lower than the common perception, repeated media stories focusing on traffic delays do a disservice to city building in Edmonton. Even with the signals operating as planned and trains running at the full 50 km/hr, motorists will still need to wait for the LRT to pass. We also still have yet to see a public media discussion of how bus routes can be modified to take the surface train crossings into account. As the current transit strategy process advances it will be interesting to see if journalists take more of an interest in these issues or whether they continue to write articles based on their view from behind the windshield.

Given that building a more ‘urban’ LRT system (and the vibrant, livable city that this supports) will involve many more such interactions between cars and transit, drivers will ultimately need to cede some road priority and, when running properly, the Metro Line will be a useful test case for how everyone can learn to share the road in the new Edmonton. Proponents of transit and urbanity must do a better job of countering the narrative of motorist pain, by engaging with media outlets and helping to shift the conversation towards more positive depictions of LRT, transit and urban life.