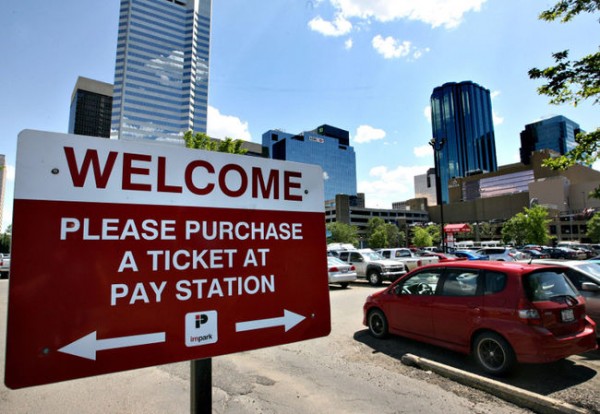 Photo courtesy of the Edmonton Examiner

It would seem to be an article of faith in Edmonton that having plentiful and cheap inner city parking is an absolute necessity. As density increases in central neighbourhoods, you’ve most likely read something about the ‘painful’ rate people pay to park next to their destination and readers can probably recall their own parking-related comments from friends or coworkers. However, a great many Edmontonians are also increasingly concerned about creating a revitalized and pedestrian-friendly city core; a goal that has also become important for our municipal government.

What this shows is that there is a large disconnect between the popularly held notion that parking must be both always available/cheap and the desire to see a vibrant downtown within a pedestrian friendly city. Given that a large amount of surface parking is detrimental to the overall health of urban centres, and a desire for urban living with reduced car dependence is growing among many age groups (not only millennials as has often been reported); rethinking views around parking provision Edmonton is something that needs to happen sooner rather than later.

The idea of a ‘downtown for people’ is an idea that is starting to shape the conversation about central Edmonton and the municipality is taking major steps to reduce the amount of, and demand for, parking. Like most cities in North America, we have had parking minimums in place for residential and commercial development for decades, and the results of these bylaws are obvious in our urban landscape. However, four years ago Council approved amendments to the zoning bylaw, introducing 20-30% reductions in residential parking minimums near LRT stations and designated transit corridors. This amendment also designated maximum parking provision in these areas, a major shift in thinking and a potential game changer for the streetscape. Additionally, in the downtown core, maximums are also in place and parking minimum are now set at zero for many types of development. Further changes are currently being considered for areas outside the downtown, including the possibility of halving parking minimums in residential areas. Currently, Edmonton requires two off-street parking spaces for a home and also mandates extra parking for basement and garage suites. Reducing or removing these requirements will hopefully allow for more infill in mature residential neighbourhoods.

From an urbanist perspective, all of these changes are positive but some hurdles exist before a parking transformation can take place in Edmonton. Firstly, they will need to be ‘sold’ to a skeptical public used to an auto-centred lifestyle; the mayor himself admits “we’re a bit parking mad here” and concerns around the availability of stalls and spots perennially dominate public hearings. 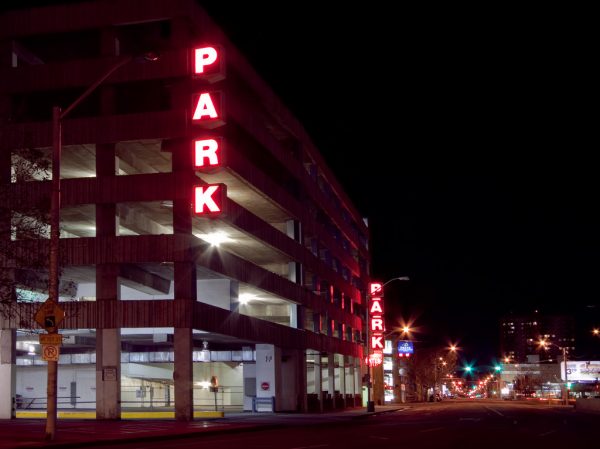 A parkade in downtown Edmonton. Photo by Tom Young.

There does seem to be a desire to build Edmonton into a more obviously urban place. The success of such inner-city areas like Old Strathcona is evidence of this, as is the election of a mayor and multiple councillors openly espousing pedestrianism, public transit and support for inner city revitalization. If residents want these changes, the need for less surface parking (and having to pay for what remains) needs to be communicated clearly. Even in ‘parking mad’ Edmonton, people are willing to take the bus, or walk a bit further from their car to access events in Old Strathcona, at Churchill Square, Commonwealth Stadium, etc. To build a more urban future, this willingness needs to be built upon and expanded to more inner city neighbourhoods.

The second major hurdle to cross is the perception that these changes are part of a ‘war on the car’. While reducing car use is essential to building a more urban city, it can actually make certain aspects of driving easier for those who still need or want to do so. This sounds counter intuitive but making this pitch could potentially be a good argument in a city like ours. Firstly, the free parking so beloved of Edmontonians has been proven to actually make life worse for those driving or who need to store their vehicle. The writings of Donald Shoup work to prove this point; in his studies of parking policy in North America, he discovered that there ultimately is no such thing as free parking. The maintenance costs of parking spots, both surface and street, (which are considerable) end up being passed on to everyone in the form of higher prices for the goods or services that these parking spots serve. Beyond this, there is the problem of induced demand, where people mentally calculate that they will be able to find free parking near their destination and thus choose to drive when otherwise they may have walked or taken transit. This results in a situation where there will never be enough parking, as people who could have used another mode of travel are competing for car storage in constrained urban spaces.  Finally, free surface parking, if located near to paid parkades, can cause a significant amount of traffic as motorists circle in hopes that one of these free spots will be available shortly.

All of these things are certainly negative from an urbanist perspective but are also things that I am positive most motorists would rather do without. Who really wants to pay higher prices, circle endlessly and perhaps choose to go home rather than not find a place to park? As well, high-quality transit provision does convince erstwhile motorists to ride it; as our LRT system continues to be built out and the bus system is reorganized, it will be easier to convince citizens that we can do without large amounts of under-priced parking. Those who still need to drive or just love their cars too much to leave them at home will potentially have more choice in parking spaces and a more vibrant, people-centred destination than currently exists in much of Edmonton.

Using these arguments will hopefully build more support for reduced parking minimums and for remaining lots and stalls to be priced at a reasonable rate, especially as urbanist thought remains distant from the lived realities of most citizens. As well, far from being foreign to Western North America, the idea of reducing central city parking has been pursued to great effect in Denver; where surface parking includes 42,000 off-street spaces (this includes parkades) and 5,000 on-street, a drop from 44,000 off-street spaces in 2011. On-street parking has remained stable throughout these years but the significant decrease in off-street spaces has come about through the conversion of surface parking lots to other uses. The number of people using transit to access downtown amenities and employers also increased to around 40% (from just over 36%) in that time period. Walking and cycling, although still low by global standards, increased as well. Far from creating an apocalyptic scenario, this reduction in parking and expansion in other forms of mobility has accompanied a boom time for the Colorado capital. Reducing parking can hardly be given all the credit for the downtown renaissance in Denver but it has not hurt and allowed the city to achieve an outsized reputation for vibrancy in the American West.

Edmonton is embarking on a transit and cycling revolution as well and now would be the time to try and replicate some of Denver’s success by continuing down the trajectory we have started in terms of parking policy and having the courage to ‘sell’ these changes to the car-driving public. With the recent unfortunate news that the Katz Group is applying for rezoning to construct a large (supposedly temporary) parking lot to the rear of the new Rogers Place arena, a parking rethink needs to be urgently pushed into the public sphere. That rezoning application is an example of business as usual thinking that will keep Edmonton from becoming one of the premier urban places in the West. The good news is that citizens attending an open house on this rezoning were generally not in favour of it and shows that with a commitment to engaging with the public and continuing to change parking policy for the better we can create an evolution in thinking and start to build the Edmonton we want to see.