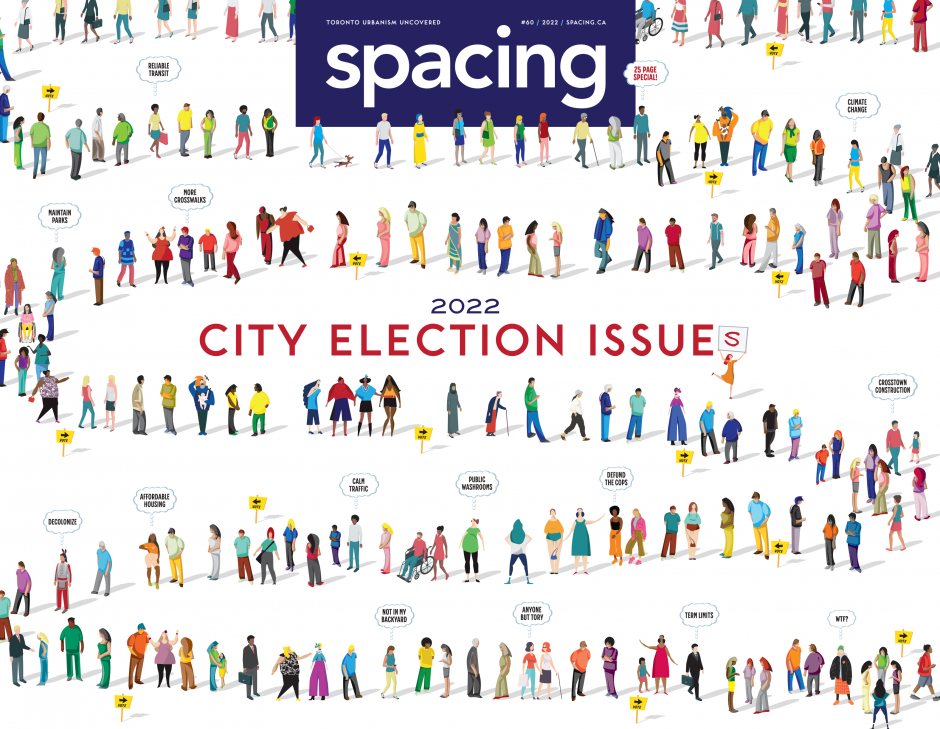 Elections are where Toronto’s residents have a chance to choose the people who will set the city’s course towards the future. As a magazine dedicated to advocating for a better city, when an election looms, Spacing has always put out an election-focused issue to help shape the debate. Sadly, the debates that characterize municipal elections often fail to address the big-picture issues facing the city.

So, ahead of our next municipal election, we want to direct the focus onto those big-picture questions. To get that focus, we’ve bundled the many small issues of municipal politics into five broad areas that shape the city: engagement, mobility, sustainability, building, and well-being.

Readers will quickly see how the five themes interact with each other. Sustainability requires a move away from being a car-dependent city. That move depends on building denser housing to support transit and local services in walking and cycling distance. That housing needs to be affordable to improve well-being and address inequality. And well-being and equality are the foundation for generating the sense of engagement in all residents that’s needed to carry these transformations through.

To warm readers up for these big ideas, our front section, as always, brings a lighter touch to thinking about what how we use public spaces in our ever-evolving city. A photo essay explores the urge to build stick forts in our parks; other pieces look at the increasing role of private basketball courts, how to make parks more welcoming to teen girls, the need for public washrooms, and the City’s new digital infrastructure strategy.
Finally, a couple of articles follow up on earlier pieces. In a sequel to last issue’s feature about Toronto’s early-20th-century newsboys, Beth Simons tells the compelling story of how they formed a union and fought for their rights. And Shari Kasman wraps up the story of Bloordale Beach, first featured in issue 55, which transformed an empty construction site into a playful if ephemeral community space.