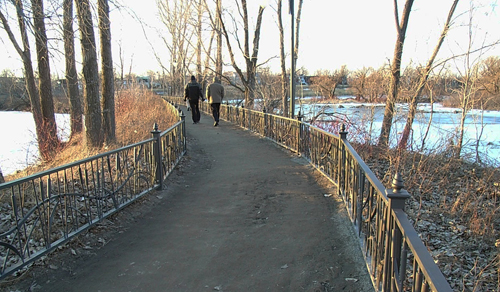 Cecilia Chen is a special contributor to Spacing Montreal. This article is part of a series of three-part series examining biodiversity along an urban shoreline.

Passing through the gate you find yourself on an extended land bridge that is raised between a water reservoir on the right and a wetland ecosystem on the left. As you walk deeper into the park, the noises of traffic are gradually superceded by the sounds of birds, wind, water and the graveled path beneath your feet.

Crossing a small bridge, you begin to hear a watery roar. Then, arriving at the long edge of the park running parallel to the river, the Lachine Rapids – called Tsi Kahnawá:here by the Mohawk who first inhabited these shores – fill your ears as your eyes follow the fast moving waters of the Saint Lawrence River tumbling down thirteen metres to the Port of Montreal. Downstream, you can see the urban skyline of Montreal.

The Parc des Rapides, built upon the eroded bones of a former hydroelectricity generating dam, is a carefully planted ecosystem: a rich and deliberate interplay of native shoreline vegetation selected to attract fish, birds, and other animals – including humans – into its many folds. In a complex knot of negotiated and shared uses, Lasalle and the Ville de Montréal lease the former hydroelectric structure from Hydro Québec for the municipal park. 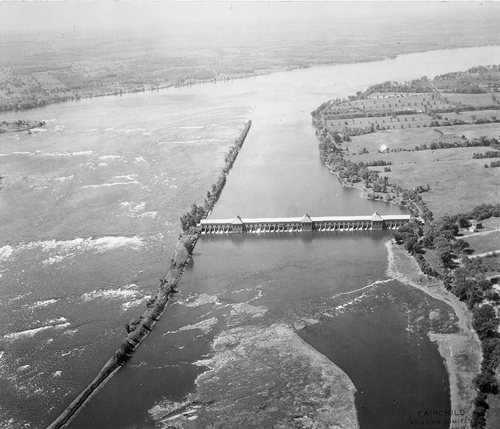 The Centrale de Lachine became the first hydroelectric facility to serve Montreal in 1897. It was decomissioned about 50 years later. Photo from Archives d’Hydro-Québec, F9/700771

In an interesting example of postindustrial transformation, this structure, originally built to harness the river to serve exclusively human ends, has now been converted into a landscape that attracts more life to an urban shore, thus, enabling a delightful biodiversity and interspecies coexistence at a local scale. This park is also the northwestern portion of the national Migratory Bird Sanctuary de l’Île aux Hérons and is stewarded by the non-profit organisation Héritage Laurentien under the direction of Patrick Asch.

In our interview, Asch refers strategically to the links between quality urban green spaces, quality of life, and real estate value. My guess is that he has had to make this pitch frequently in order to garner funding and political support for the Parc des Rapides.

However, Héritage Laurentien operates within an entirely different kind of economy. Unlike the profit-driven markets of property and development, this community organisation depends upon the dedicated and enthusiastic energies of its volunteers and modestly paid staff – including its various consultants and specialists.

The other collaboration essential to the success of the Parc des Rapides is the willingness of its increasing number of visitors to respect the conditions established for this carefully cultured and naturalized shoreline.

At the park’s gated entrance, not far from the neat housing on Lasalle Boulevard, multiple signs both celebrate the park and clearly tell you how you should behave once inside. No bikes, no cars, no dogs, no swimming, no wading, no littering, no shooting, no fires, no disturbing of vegetation or habitat – walking and fishing are permitted – but only in the designated areas.

Biodiversity is not without condition. The Parc des Rapides is possible due to a set of permitted and prohibited interactions between living beings. In this sense, it is very much an urban park that (like the city of Montreal, itself) depends upon a set of behaviours coded through learned social habit and legislation.

With clearly defined pathways, protected by prickly planted borders or fences, and frequent and well-placed lookouts, the Parc des Rapides has an infrastructure that suggests ideal behaviours and judicious interactions among humans, birds, fish, wetlands and river. By deliberately providing great visual access to every part of the park, Asch notes that the large majority of human visitors accept restricted bodily access.

A fence and prickly bush strongly suggest that visitors stick to the path at this lookout point. Île aux Chèvres and Île aux Hérons are visible on the horizon.

As perhaps suggested by this park, learning to live with others is a work of negotiated community building – whether restored shoreline ecosystem or urban neighbourhood. Biodiversity in its widest sense includes many forms of life: insider, outsider, migrant – plant, animal, human and hybrid. The Parc des Rapides may help us imagine a richer and more lively urban future of complex coexistence.

Watch for Nature and Culture Days (Les journées nature et patrimoine) every Saturday between 11am and 7pm at the Parc des Rapides from May 23rd to August 22nd, 2009.

All photos by Cecilia Chen unless otherwise indicated.