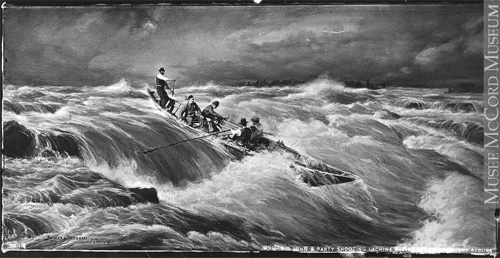 Cecilia Chen is a special contributor to Spacing Montreal. This article is the second of a three-part series examining biodiversity along an urban shoreline. Her first article was More Life – Biodiversity and the Parc des Rapides.

This past autumn I ventured into the Lachine Rapids in a sturdy inflatable raft with ten other people. We had a guide and we were all wearing life jackets. We were told when to paddle, when to duck and hold on tight and when we could (optionally) jump into the river. Prior to any of this excitement, we were also told a parable about the ill-fated adventure of the young Frenchman Louis, the Montagnais captain Outetoucos and Samuel de Champlain’s Huron guest and hostage Savignon. These three went on a hunting trip, loaded up their canoe with many birds, and on the way back capsized in the rapids. Louis couldn’t swim, let go of the boat and drowned. Outetoucos could swim quite well, let go of the boat to try to swim to shore and drowned. Savignon held on to the boat and was the only one to survive.

Clearly our guide meant for us to understand that, should we capsize, we were to cling to the boat. But there may be other morals to be drawn from this story, such as: do not to poach the birds in the National Migratory Bird Sanctuary on Heron Island, or, that the power and beauty of wild waters must be respected, or, even, somewhat cynically, that waters once regarded as powerful and deadly have now become merely thrilling as they are incorporated into recreational culture and play.

Yet, I believe that there is a deeper connection between Montreal and the Lachine Rapids. For, Montreal has many origin stories and almost all of them involve the rapids.

One starts with the use of what we now call Montreal Island by the native peoples of this area to portage past the rapids with their light agile boats well adapted to a land rich with rivers and lakes. This story is richly layered as the Huron, the Algonquin, the Iroquois and the Montagnais all negotiate this strategic territory.

A subsequent story starts in 1535 as Jacques Cartier arrives from downstream and encounters the impassable rapids near Hochelaga. He and his men leave their heavy, deep-keeled sea vessels by shore and are led by the inhabitants of Hochelaga up the slopes of a big hill. Cartier eyeballs the turbulent waters below and calls them big: les Grands Saults et le Mont Royal – the Big Rapids and the Royal Mountain were claimed in name by this visitor almost simultaneously.

Yet another story of these rapids begins with the party of Samuel de Champlain in 1611 as he laments the drowning death of a young traveling companion – Louis of the safety parable above (Champlain’s version of the story can be read here – scroll down to chapter 2). He renames the turbulent waters les Grands Saults-de-Saint-Louis, possibly to commemorate his companion’s demise or to recognize the French saint or both. To this day, one of the standing waves in the rapids is named for drowned Louis and Outetoucos

Later in the 1600s, Robert Cavelier de LaSalle sets out with another exploratory party to discover a trade route to Cathay. Bad circumstance forces them to turn around much earlier than expected and his lands by the rapids become known ironically as La Chine and then Lachine. The adjacent rapids are thus named for the trade route to China that was never discovered.

Another standing wave in the rapids is named for Big John, a well-known Mohawk navigator of the rapids in the late 1800s.

Prior to the completion of the Lachine Canal, goods and people traveling upstream had to go overland to bypass the rapids. When traveling downstream there was a speedier and more thrilling option to run the rapids with an experienced river pilot. At this time, the river steamboat depended upon skilled pilots and many of these navigators were Mohawk from the community of Kahnewake.

In 1959, the construction of the St. Lawrence International Seaway was completed, facilitating a complete bypass of the rapids by large ships. Moreover, the building of the Seaway severed the relationship of the many people living on the South Shore with both the river and the rapids. Many people in communities such as Ste-Catherine and Kahnewake had their lands and homes appropriated and were forced to relocate.

Yet, despite the distance put between people and the river by the infrastructures of industrial progress, there are increasingly contemporary, perhaps post-industrial, ways of “running the rapids”. In my interview with Heritage Laurentien director, Patrick Asch, some of his seriousness drops away we speak of the growing culture of river surfing and river kayaking in the rapids. Despite its winters, Montreal is the largest center of river surfing in North America. The consistent standing waves of the Lachine rapids and off of Habitat ’67 and the urban amenities of Montreal make this a favorite destination for many.

Asch also mentions the mothballed proposals for a new hydroelectric dam project in Verdun adopted by the Société du Havre in the early 2000s. If ever built, this project would submerge the Lachine Rapids and radically alter the rich shoreline ecosystem. Just as the thrill of the rapids persists, so too do the forces that would tame these waters to exclusively utilitarian ends.

Images from the McCord Museum, used under a creative commons liscence.