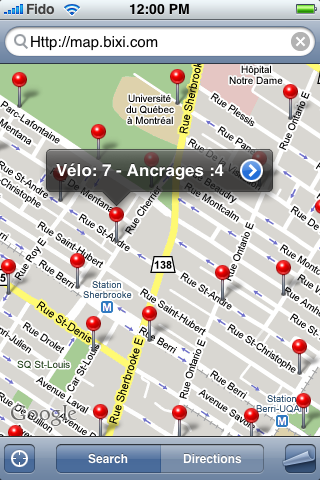 There has been an interesting controversy brewing about the use of a user-created application for iPhones and Blackberries to track Bixi availability. Spacing Montreal reader, Colin Guillas, sent us this article.

First, Bixi flexed their legal muscle and shut down a free iPhone app designed to actually make the system usable, since there weren’t even static maps at the stations.  Next, they told us that there would not be a public API made available for others to make the system available for use.  An enterprising user announced a hack that would allow users to access Bixi statistics in Google Maps.  Bixi responded by telling mobile users that their system was fully mobile enabled, and that all users had to do was visit their mobile enabled page.  Unfortunately, this site was extremely slow, bandwidth intensive, and not location aware.  It was beginning to look like Bixi not only wasn’t interested in mobile users, but was actively trying to discourage them.

Well, it appears that Bixi has had a change of heart and has forwarded the link http://map.bixi.com directly to the Google Earth-compatible KML file that they use for their real time maps.  Typing the above link into the mobile search field from within the Maps application on the iPhone or BlackBerry will quickly bring up real time Bixi stand data as well as allow users to plot routes and pinpoint their location using the GPS features of their device.  Even though it is a web link, it must be opened using Maps, not Safari on the iPhone.

It’s not known why the team at Bixi didn’t set this up earlier, since they have been using a Google Maps data embed all along, but let’s hope that this is a sign of more co-operation to come.  It is good to see that they have decided to embrace the technology instead of continuing to fight it.