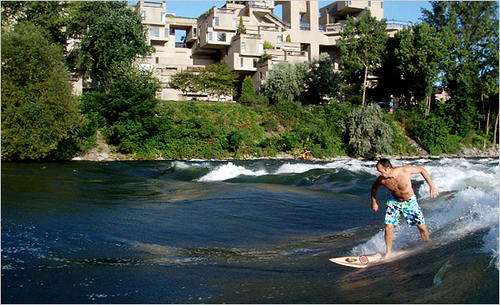 If you’ve never been down to Habitat to see the surfers first-hand, I would highly recommend it. Even as a spectator, the level of skill and patience required to achieve the such serenity is commendable. The level of surfing etiquette shown is also remarkable; surfers patiently await their turn, paddle over to their desired spot, ride the standing wave for about 5 minutes and then drop off to show that their turns are over. They swim to shore, hike up and over the small cliff, and back into line for another go. Even when I went on a cold March afternoon, there was at least a 15 person line-up. I suggest if you’re interested, go early and with wet-suit – the St. Lawrence is cold!

For more information, visit www.surfmtl.com and www.surfmontreal.com
Habitat 67 is at 2600 Avenue Pierre-Dupuy in Montreal. From Autoroute Bonaventure 10, take Avenue Pierre-Dupuy north. Park in the pull-off to the right, just past the street address. Walk behind tennis courts and down a dirt path; the wave itself is easy to spot, just down the embankment.