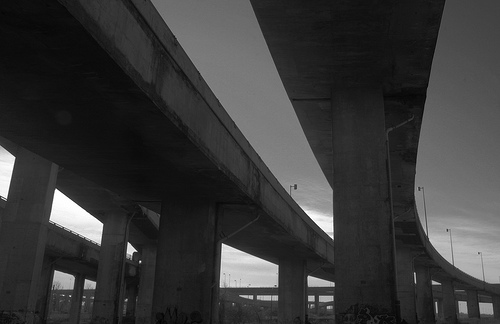 A dull roar of opposition to the MTQ’s Turcot plan has been rumbling  through urban planning circles and neighbourhood groups since the Ministère de Transport announced its controversial plan to demolish a few hundred homes to rebuild the Turcot Interchange, a structure that always seems to elicit feelings of awe, disdain and often both. Opposition to the project is likely to grow louder, as the Minister of the Environment decides on the outcome of the province’s environmental assessment hearings and likely on the project’s ultimate fate.

The project has what seems like every possible interest group in a tizzy: housing advocates decry the 200 homes that will be demolished, environmentalists criticize the failure to reduce C02 emission, urban planners condemn the new enclaves the highway embankments will create,  and the Auditor-General himself is up in arms over the overall lack of coherent plan that characterizes the MTQ’s many highway projects in the Montreal area, projected to gobble up about ten billion taxpayer dollars in the next few years. But it’s not just interest groups that don’t agree with the MTQ’s auto-moving priorities: a Leger Marketing poll found that 86% of Montrealer’s support reducing the number of cars in the downtown; another poll suggested that transit is the number one priority for Montrealers as they head to the polls in November and not, surprisingly, scandals.

Although it seems that everyone in this city is against the MTQ on this project, there are those who lend them their support. The major criticism of opponents to the MTQ’s plan is the absence of a clear alternative. And for a time that was legitimate criticism. In response, to show that there are credible alternative solutions to Montreal’s immediate car-moving problem, as well as its long-term transportation problem, a collection of essays on the Turcot called Montreal at a Crossroads has recently been published. Non-believers in a solution that is both viable and visionary would do well to check out chapter 2 by architect Pierre Brisset, where the author outlines a strategy for renovating some segments, decommissioning others and implementing several bold public transit initiatives, largely aimed at West Islanders.

Still, though, it’s not hard to understand the political exigencies that are pushing this thing forward. With the specter of the recession still looming, getting new economy-stimulating concrete poured is at the top of many political agendas (and also the companies that pour it). But one has to wonder: at what point will public outrage grow loud enough to stop such massive spending on projects with seemingly little long-term vision? Or will the MTQ’s gamble pay off that Montrealers in areas not directly affected will just thank their lucky stars that the highway isn’t going through THEIR backyard?

I don’t think it’s over-stating matters to say that the city is at a pivotal moment in this its history. Currently, the option to continue to pursue auto-dominated mobility is coming into conflict with issues of that are becoming pretty hard to ignore: climate change, local air quality and the general desire to live healthy lives in attractive cities. The Battle of the Turcot has become much more than an interchange of north-south and east-west vehicle traffic; it is a crossroads where Montreal’s transportation future is being decided.