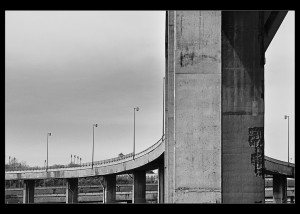 Opposition to the Turcot reconstruction project has climbed even farther up the ladder.

La Presse reported that in a parliamentary committee on Wednesday, the Minister of Health, Yves Bolduc, recommended that the government adopt a moratorium on all highway projects that will increase the amount of traffic in the Greater Montreal region. In addition to the Turcot, this recommendation includes the highway 25 extension, as well as the ‘Modernization of Notre Dame’ in the east end.

The Direction de Santé Publique de Montréal (DSP) – a lower level health authority with an advisory responsibilities – has been warning about the dangerous health and climate effects of more highway projects for some time; however, this is the first time the upper level health ministry has weighed in.

Does this suggest that a change of policy at the upper level is in the works? I suspect that some major soul-searching – or at least strategizing – are taking place right now in the Premier’s office. On the one hand, drivers on Quebec’s highways are constantly reminded about the economic benefits of highway projects (‘Nos infrastructure, c’est 100 000 emplois’ ), a compelling fact during economic hard times. Yet the Premier is also preparing for a visit to Copenhagen for the next major climate summit, where he plans to strut around peacock-proud over Quebec’s environmental record.

How will the Premier reconcile these competing interests? I suspect we’ll find out when the outcome of the environmental assessment hearings are announced. As I described in a previous post, November 11 is the final day the Environment Minster has to render her recommendations – influenced in no small degree by the Premier – public. The waiting ends soon.

I would be remiss to not mention a demonstration happening tomorrow: Turcot activists hope to send a loud message that their neighbourhood deserves a better project. This may be the opportune moment. The event is on for Sunday, November 6 at 1:30 pm, starting at Lionel-Groulx metro. 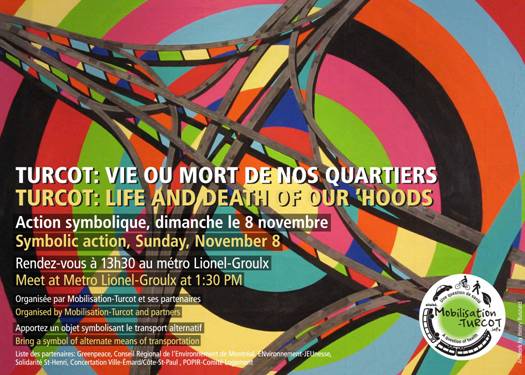