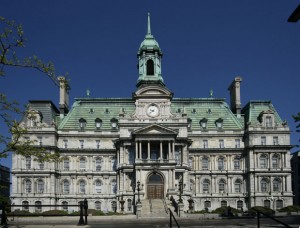 In a special meeting of City Council today, Mayor Tremblay tabled the 2010 Budget of the City of Montreal, establishing his main priorities for the year.

The complete text of the budget is available on the city’s website. There is also an “at a glance” summary that explains the salient points.

As expected, the budget was greeted unenthusiastically by the opposition parties. Vision Montreal’s main objection was to the tax increase accompanied by the drop in infrastructure spending. Louise Harel went so far as to say that  it will put the breaks on economic growth in the city by taxing businesses more while at the same time not creating any new jobs.

Projet Montreal criticised the budget as well, but reiterated their offer to support it if certain amendments were made. The party’s finance critic, Peter McQueen, stated that they would vote for the budget if three main changes were made to it, notably freezing STM fees for the year and increasing funding to the boroughs. That said, these are changes that Mayor Tremblay is not likely to agree to.

So what happens now?

At this point the budget has been tabled in City Council, but it hasn’t been adopted. It will now go on to be studied in the ad-hoc budget committee, which will hold its first meeting this Friday. In theory the budget can be amended in committee, but in practice there are rarely significant changes. Richard Bergeron pointed this out by noting that the city has already made a mass order of glossy, full-colour paper versions of the budget, despite the fact that it hasn’t even been approved.

One issue that remains to be settled is how the two opposition members on the Executive Committee, Richard Bergeron and Lyn Thériault, will vote on the budget. Opposition parties generally vote against a budget, since it is the most important document establishing an administration’s priorities and general direction. Given the statements made by both opposition party councillors today during the meeting, it seems they will likely end up voting against this budget. Bergeron and Thériault will thus have party lines against the document, but as members of the Executive Committee they will be expected to vote for it. Bergeron alluded to this contradiction today mentioning that he would neither “break solidarity with his caucus, nor with his fellow Executive Committee members”. How he will achieve this is yet to be seen.