Being a big transportation nerd, I was pretty pumped up to learn that the AMT has finally released the results of the transportation survey they did back in 2008, or at least what they consider the highlights of the results. Here’s a few things that caught my eye…

In 2008, the Montreal Metropolitan Area grew. That is, the territory included in the AMT study expanded by a third (about 2700 square kms) to include places like Ste-Adèle and Morin Heights. I believe that, to qualify for AMT scrutiny, a certain proportion of residents must work in Montreal, although the report released last week does not clarify the criteria.

It was somewhat disturbing for me that friends’ and parents’ cottages have been swallowed up by the new MMA map. It also boggles my mind that what for me is a big weekend getaway is, for others, the daily commute. 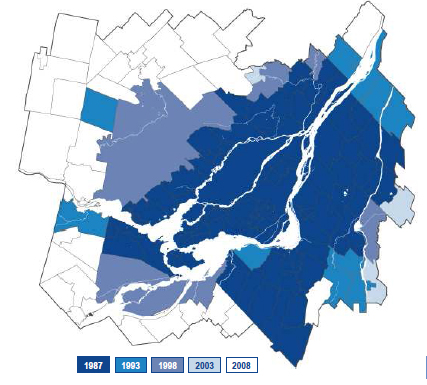 So there are more people commuting each morning, and more people own cars. With that in mind, it’s really quite surprising that car use during morning rush hour actually went down by 1% between 2003-08. It’s the first time that car use has decreased since the AMT began collecting statistics in 1970. That said, 71% of trips in the region are still made by car and most of the cars on the road at rush hour are still single-occupancy vehicles.

The big headline of the day was the sharp rise in transit ridership: a quarter of commuters now use transit. This is up from 22% in 2003, but only slightly surpasses 1993 levels of transit ridership.

This includes many who travel from the suburbs into the city each day: a full two thirds of people who work or study in downtown Montreal commute via public transportation. And, in fact, the greatest local increase is transit ridership is furthest from the city core:

In a Radio-Canada report in January, Jean-François Lachance, of the Institut de la Statistique du Québec, hypothesized that better and more far-reaching transit, along with more affordable property,  makes the suburbs more attractive.

Kate M at the Montreal City Weblog asked whether better transit could be fueling suburban sprawl? And if that is the case, ain’t that a dill of a planning pickle.

All images are extracted from the AMT’s Enquête Origine Destination 2008 Faits Salients and Resultats – faits salients documents. I’m still eagerly awaiting the complete report which includes all those non-salient tidbits like the breakdown on active transportation in the region.