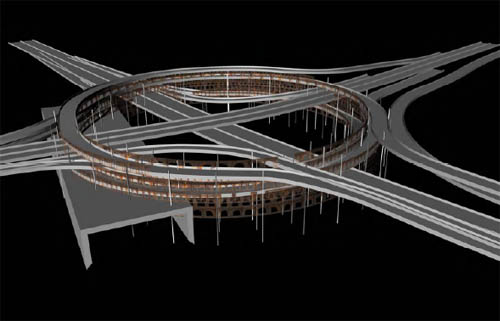 An illustration of the City’s proposed Turcot Interchange reconstruction.

Today Mayor Tremblay and Richard Bergeron, responsible for urban planning on the Executive Committee, presented the City of Montreal’s alternative Turcot interchange projet to the general public during an afternoon presentation and news conference. This counter proposal was submitted to the Ministry of Transport a few weeks back, but has up until this point been confidential. Negotiations with the Ministry are ongoing, and City officials decided to go public with their plan in an attempt to inform the public of their efforts and to rally support behind their position.

The City plan proposes that Turcot be rebuilt as a circular interchange, which would have the benefit of being much more compact than the Ministry of Transport’s project. As a result, the design would not require the expropriation and demolition of any existing properties, contrary to the Ministry’s proposal which would involve the destruction of housing on Cazelais street in Saint-Henri. A circular Turcot would even free up some land currently occupied by the current interchange, allowing for new construction projects.

The counter proposal would include dedicated lanes for public transit, as well a two lanes for general traffic in each direction. It would maintain the existing capacity on the north-south axis, and reduce it on the east-west axis, unlike the Ministry proposal which proposes increases.

A circular interchange in Shanghai.

The City proposal situates the rebuilding of the Turcot as part of a broader revitalisation plan of the old industrial areas in the Sud-Ouest. As a second stage, the City proposes turning the Falaise Saint-Jacques into a new nature park, and building a new neighbourhood on the old rail yards. This “Quartier de la falaise” would be linked to the rest of the city by a new tramway line, going from Lachine, through the Sud-ouest and on to Downtown.

The location of the proposed “Quartier de la falaise”, highlighted in red.

The presentation of the counter proposal was an example of a multi-party Executive Committee that works. Tremblay and Bergeron worked in tandem, with Tremblay explaining the general context and then passing the microphone over to Bergeron to explain the details and sell the project to the public. The content of the proposal was in classic Projet Montréal style, full of examples from other cities around the world that have dealt with similar urban planning challenges.

Politically, this plan seems to have near unanimous support on City Council. It’s a creation of Richard Bergeron and Mayor Tremblay, and it thus has their parties’ support. Louise Harel has come out in support of the proposal, and Benoît Doré, the Vision mayor of the Sud-Ouest, said that the proposal shows that another Turcot is possible and called on all Montrealers to unite behind it.

While the City of Montreal is a partner, the rebuilding of the interchange is entirely the responsibility of the Ministry of Transport. The City has taken an active role in asserting its vision because of the consequences the project will have on adjactent neighbourhoods and the city as a whole. As Mayor Tremblay said, “This project will have a major impact on the quality of life of Montrealers for decades to come… it isn’t in the middle of a field, it’s in the middle of a city.”  It remains to be seen how the Ministry will modify its plans in light of this proposed alternative. An official response is expected in the coming weeks.

Update: The presentation for the City of Montreal’s proposal can be found here.