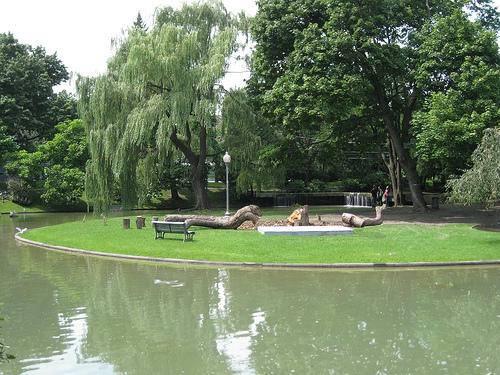 I came home from a weekend of camping to learn that Westmount Park willow had fallen. It was a heavy storm last Tuesday that finally bent the old tree to the breaking point, but by that time its trunk was already stooped nearly to the ground and its bark had been polished by thousands upon thousands of sneakers.

When I was a small that willow felt like a kingdom of possibilities hanging high above the ground. Later, as teenagers, we straddled the branches and let our legs swing down lazily while we exchanged gossip or plotted pranks.

By that time, the Westmount Park willow had undergone a number of life-saving interventions: its swooping branches were propped up with metal braces, its hollow trunk was patched with concrete. It was hard to ignore the fact that we – among thousands of other tree-climbers – were driving that beloved willow into the ground, but who could resist the invitation of those low-slung branches?

We loved that tree to death, didn’t we? I recently learned that climbing trees is illegal in Montreal – at least trees that are planted by the city (it’s in the cleanliess act along with the ban on postering).  I am outraged by this rule, but I am resigned to it. Within the city we are so many many people that any patch of nature we preserve is bound to cave under our collective weight.

This summer I spoke with some educators from Les Amis de la Montagne about the degradation caused by the millions of visitors who romp through Mount Royal’s fragile habitats seeking a tiny corner of wildness, a breath of mountain-top freedom. Much of thier mandate has to do with educating visitors to keep to the paths, curbing destructive mountain-biking practices and preventing people from lighting fires.

I love this city – I have written it dozens of times on the blog – but some sacrifices seem almost unbearable: That children should not test their strength and courage in the tree-tops, that teenagers should grow up without the kiss of bonfire flames, that we must not stray from the paths to chase butterflies and inspiration through the forest. That we grow up in the city wondering what we may do before we ever contemplate what we can do.

But what is the solution? Do we surrender that little semblance of freedom? Or do we do what Westmount Park has done all these years and sacrifice the beloved tree, patching it up season after season while its roots and branches wore away under our feet?