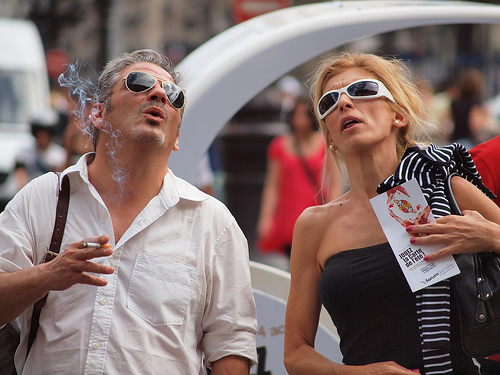 A friend of mine recently came to me with a dilemma.

Let me explain it to you.

For the sake of anonymity, I will not mention any names.

The friend of her friend’s boyfriend … you follow me so far?

Or better yet, her friend’s boyfriend’s friend … confused? Me too.

Now here’s the dilemma. There is no word in either English or French to describe what it’s like to be around Megan. “Fun” is so overused; it does not begin to describe the unique experience had whilst in her company. And “lively” only explains the half of it. I would say quality time with her resembles an intoxicating cross between merriment and jubilation (with just a touch of rapture).

So this is why, whenever out-of-towners visit, they must hang out with Megan. She has become a tourist attraction that rivals The Botanical Gardens, or, The St-Joseph Oratory.

But unlike the aforementioned Montreal destinations, Megan is a human being.

And so, the day before Adam came to visit, she confessed:
“I have a thesis to write. I have a job to work. I have a life to lead. I don’t have time to play tour guide.”

I felt her pain.

I too have become a perennial stop on the tourist circuit.

A constant stream of people flows like a creek through my front door and into my home. I could refuse them, but I don’t. Why? Because I know their Montreal experience with me will be like no other. And I’ll be damned if I let someone go home thinking this city sucks.

Megan and I are not the only ones. This trend, where individuals play the part of Regional Tourism Board to their guests, seems to be growing. Western society is moving from the modern to the post-modern tourist: The post-tourist.

In theory, the post-tourist eschews authentic attractions (the ones traditionally marketed by tourism boards) for experiences not unlike those he enjoys back home. The goal of travelling is no longer to “tour” the city but to live it – on your own terms. My mother, whilst visiting the city for the first time last summer, didn’t check out Olympic Stadium, or La Ronde, or The Biodome. Instead, she went to the library, hung out in the park, and sipped sangria on a restaurant patio – things she would have done had she been back in Ontario. The kicker: she stated how lovely the Montreal lifestyle was.

And then I think back to some of the cities I have visited:
Night markets, Big Buddhas, and giant escalators aside, Hong Kong was remarkable because of the cute French couple with whom I spent every waking (and non-waking) hour.

The vegan pastries and fabulous Indian food I devoured in Mumbai is enough reason for me to hop on the next plane over there.

And other than Buckingham Palace, I’ve been to not one major tourist attraction in London. Yet, despite numerous visits, I still heart that city.

I am certainly not prophesying the death of the modern tourist; attractions will still draw crowds. Instead, I suggest we blow the stuffy definition of tourism wide open. Beyond the actual touring, one can argue it encompasses living, working, playing, and just being. For some time now, Tourisme Montréal has been playing its part by maintaining a blog promising “an insider take on the city” – several city residents letting the world know what it is like to live Montréal. From the biggest of festivals, to the smallest of vernissages, the activities proposed could have easily been lifted from my day planner. They don’t want you to just visit the city, they urge you to be a part of it – if only for a few days.

So the next time I have someone over and I am obsessing over which location would be best for dinner plans; or which party we must attend; or how to guarantee that my visitor gets laid – please understand – I am trying to do my part to increase tourism dollars to our fair city.