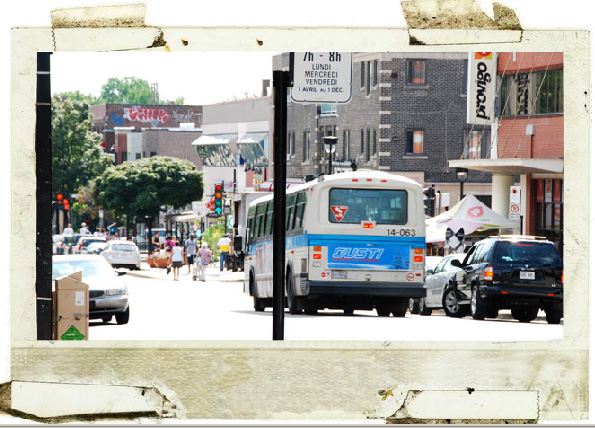 The winds of change are converging upon the west-end neighbourhood of NDG.  Winds, gales, practically hurricanes. Between the plans for the MUHC superhospital on the old Glen yards, highway construction, new additions to Concordia’s Loyola campus, the Benny Farm complex which has grown to incorporate a sports complex, library, CLSC and more, and the proliferation of condos popping up in NDG, it seems that the demographics and character of the neighbourhood are about to undergo a makeover.

Tim Schwab, a documentary filmmaker who teachers Communications at Concordia university who has lived in NDG since 1996, set out to document the neighbourhood in a creative way. With a grant from the Fonds québécois de la recherche sur la société et la culture, Schwab created Imagining NDG, a web project that one can wander through much like the neighbourhood it depicts.

The “NDG Then” section of the website gathers archival images showing the evolution of NDG from farmland to streetcar suburb, while “NDG Now” presents interviews with residents and community organizers on some of the present day issues, from superhospital traffic to Walkley street’s perennial bad reputation (this section would benefit from listing the interviewees directly on the page). A third section contains short documentary films about the dormant Empress Theatre, the local graffiti scene, and the unforgettable Hillbilly night at the Wheel Club.

Schwab says that the project aims to create a snapshot of urban change over time. “We found out how difficult that is to do,” he says, pointing out that some of the information was already dated by the time they launched the site, as dossiers like the superhospital rush forward.

“The next phase will be less formal,” Schwab says. He hopes to create a platform where community members will contribute their own memories, impressions and hopes for the neighbourhood. Anyone interested in contributing photos, oral histories, blog posts, or other media is welcome to get in touch.