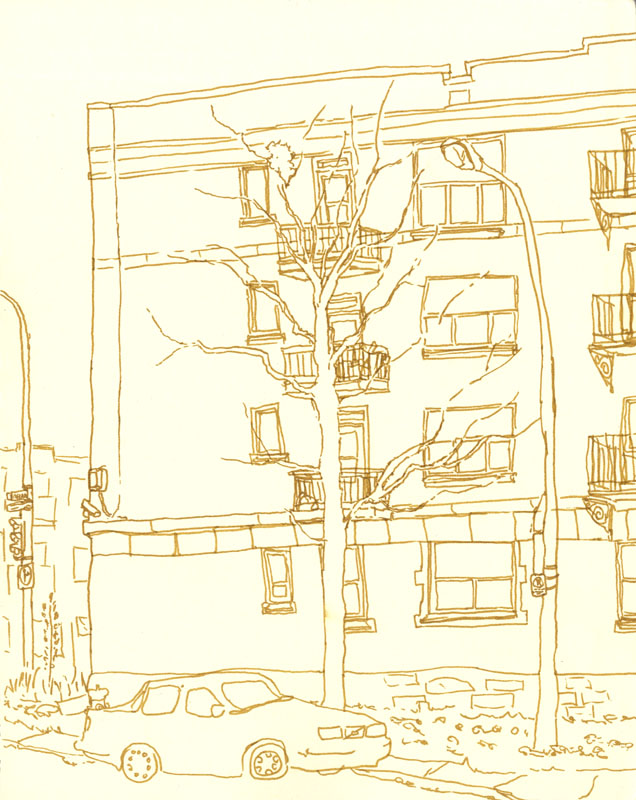 The Building Project, along with its fellow inhabitants of Montreal, experienced a cold shock earlier this week – literally, somewhat frigid.  Snow, for cripes sake! Snow! As tardy as it was this year (don’t we remember crunching across frozen lawns as trick-or-treaters, or enjoying the surprise white precipitate quilt that derails schedules across the city for a day and [less frequently] deems school cancellations in mid-October?), it was beautiful to wake up to the familiar ambient blue glow that saturates the indoors from all daylight sources.

Snow is fun for most, at first.  Boots are donned, snow balls are tossed, the compulsive pull out their shovels and brooms to maintain clear walkways on their porches, paths, and subsequent sidewalk plots. But, by the end of the day, the sentiments of those bemoaning the imminent onslaught of weather start to ring true as the melting, sludgy city tries to wade its way back into clarity from the obscure yet pristine carte blanche – remains of snowmen grin demonically from mud puddles, salt stains cake pant legs abound, and those in favour of dry pedestrianism must keep a wary eye and a spry step when waging the war against traffic and its slush-puddle sidekicks.

But that day of first snow represents only the joyous initiation and the dregged finality of a season that conquers a good quarter of Montreal’s calendar, give or take. A season, as I say, that one must be a little crazy to stay and put up with, likening the city to an eccentric lover. It challenges the desires and proves the passions of Montrealers. For all its floral and fecund episodes, we also love it for its dark and cold side. Even though we like to complain – but that’s not winter, it’s just human nature.

This Sunday Building Project was drawn a few days after the snowfall, but coincided with a visit to a craft fair in NDG – it’s bazaar season! Happy bazaaring.