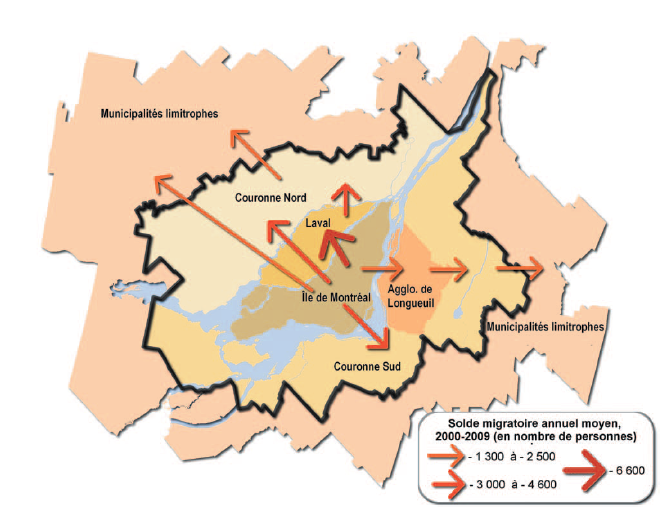 Migratory flows of people registered with the RAMQ within the Greater Montreal region, 2000-2009. Source: Institut de la statistique du Québec, data processed by the MMC (from the Montréalités urbaines website)

I have to say I find the  phenomenon of “francophone flight” (to be a bit provocative) certainly very intriguing and also a little bit disturbing – it does seem strange to me that we hear so many complaints about the fact that Montreal becoming “less francophone” (which is true, at least from 2001 to 2006) and yet it is precisely the francophones who are leaving the island massively.

There’d be a lot there to unpack, but let us start with the premise that there is a so-called “francophone exodus”. So what?

Well, it’s confusing. On the one hand, we keep hearing anecdotes in the media (notably, on Radio-Canada) of suburbanites moving back to the city, and it turns out last year was a record year for the production of condo units with 12 681 condo starts. (Yes, I know, the beginning of 2012 wasn’t so hot. But that doesn’t change the fact that last year was).

On the other hand, we learnt in January that Montreal lost about 22 000 people to the suburbs again this year. These statistics are based on people’s address changes with the RAMQ, so it doesn’t include new immigrants who, incidentally, are slightly more numerous than those who leave. So Montreal’s population is actually growing (very slowly), despite the continuing exodus (of francophones, mainly).

So here comes the million dollar question: how can there be so many new condo units – which, apparently, are getting sold – when people are actually leaving the city? Some have advanced the Dubai hypothesis, according to which half of the new condos downtown would be owned by foreign investors/speculators. However, this is apparently not the case: according to McGill Immobilier, these buyer-investors make up less than 1% of the market in Montreal (vs. 40% in Vancouver). Who, then, are these people who are buying condominiums?

The only other explanation is that households are getting smaller, so that there are more households (including 1-person households) looking for housing. But it is really conceivable that this factor alone could account for the apparently insatiable appetite that Montrealers have for condominiums – especially knowing that approximately 39% of Montrealers are already living alone and another 31% are living with only one other person (according to the 2006 census)?

Perhaps the answer lies somewhere in between, or perhaps the stats simply aren’t capturing an important aspect of reality: condominium living is becoming (or has it already become?) a new stage of life as opposed to a new way of life. If that is the case, the condo market might suffer when (and if) the boomer-echos (people in their late twenties, early to mid thirties) echo their own parents and leave en masse.

Or maybe I’m just not connecting the dots properly. Please don’t be shy to point out the obvious to me, if you see something obvious (or not so obvious) that I don’t.