The images and some of the content of this post has been adapted from Montréalités Urbaines with the author’s permission.

Can the City sell a park? That’s the question that question raised by the decision earlier this week to put the Dow Planetarium up for sale.

Projet Montréal leader Richard Bergeron fears that the sale of the lot, which is zoned as a park, will set a dangerous precedent for the privatization of public space. The Tremblay administration has replied that only the area covered by the planetarium and it’s parking lot are for sale, not the little park bordering the Planetarium on the north side, called Chaboillez square.

However, historical maps from the Montreal Archives show that, at one time or another, Chaboillez Square actually covered the entire lot where the planetarium now sits: 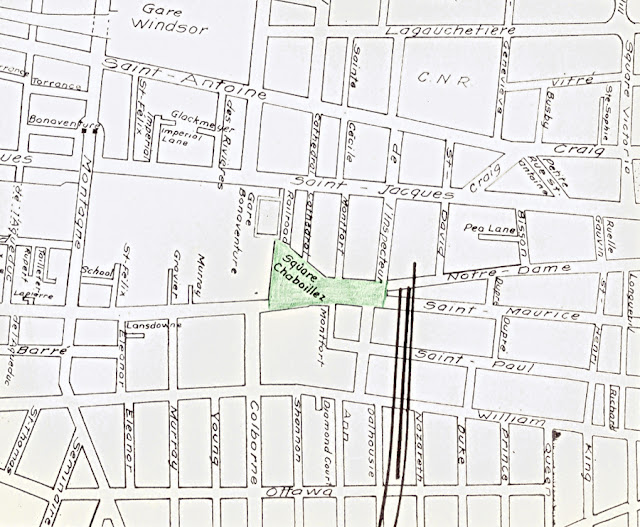 Square Chaboillez was ceded to the City of Montreal by a private owner in 1813. In 1953, after the old Gare Bonaventure burned, the borders of square were redefined: 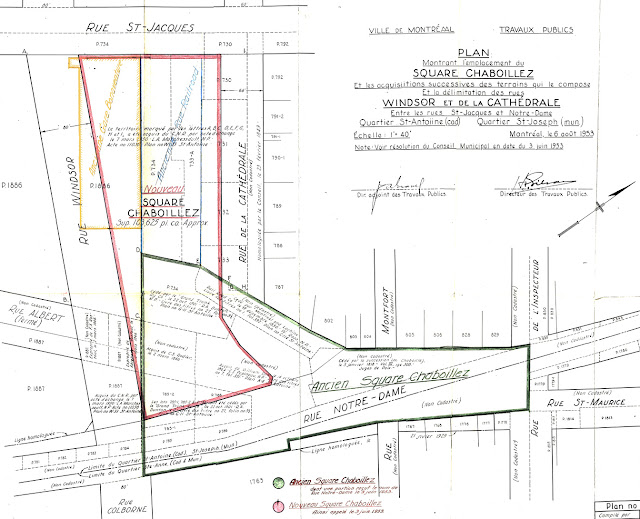 From 1956-1964, Square Chaboillez was used as a parking lot for the Bonaventure train station, until the planetarium was built on the site in 1966. 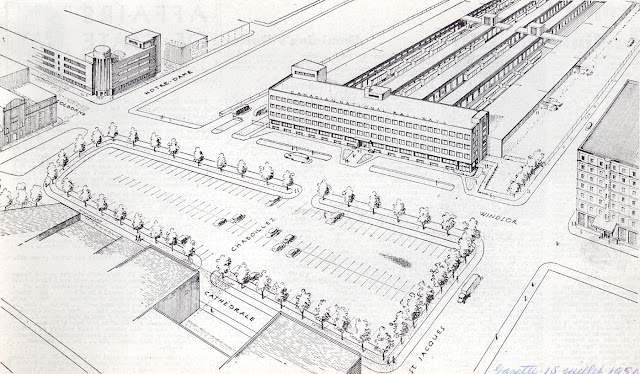 Plans for the new CN station in 1956 (published in the Gazette, Archives de Montréal) via Montréalités Urbaines

Here’s my best attempt at placing the historic Square on a present-day map. The area up for sale represents more than two thirds of Square Chaboillez as it was defined in 1953 (pink boundary), as well as the remaining part of the original 1813 square. The area that the City currently recognizes as “Square Chaboillez” lies in the north-most part of the 1953 boundary. 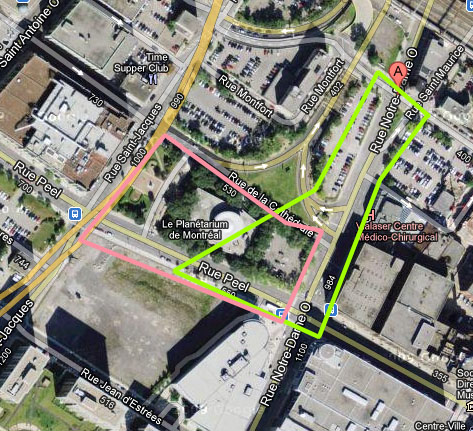 La Presse reports that the City has put the planetarium up for sale for less than a tenth of the estimated value of the land and building, but with a number of conditions: the owners must respect the enveloppe of the building, without making any additions, and must invest at least $1 million in renovating the building within the next two years. The parking lot south of the building must be transformed into a green space. No subsidies will accompany the sale. Currently , the zoning permits a convention centre, museum, show-space, library or daycare.

Bergeron points out that a recent OCPM consultation about the future of Griffintown found that the neighbourhood suffered from an acute shortage of park space. Héritage Montréal has listed the old planetarium among the city’s threatened heritage buildings. The conditions seem to respect both of these priorities – if, of course, the buyer actually respects them. In an interview with Journal Metro, Héritage Montréal’s Dinu Bumbaru says he sees hope in the low asking price of the lot. He points out that a higher price would suggest that this site could become profitable through conversion to condos while the low asking price is more in line with a community vocation.

The City’s action suggests that we are lacking the public resources to invest in renovating and maintaining the 1966 building and the park space. A recycled architectural icon and a private green space is certainly better than a neglected historic building and an overgrown lot – but at what cost? The unilateral decision to sell a space zoned as a park, without any debate, could have a profound effect on how we treat public space.

Of course if we are to put any weight the story of Square Chaboillez, we have a precedent for rewriting the boundaries of a 150-year old public space and turning into a parking lot. I guess things could be worse.