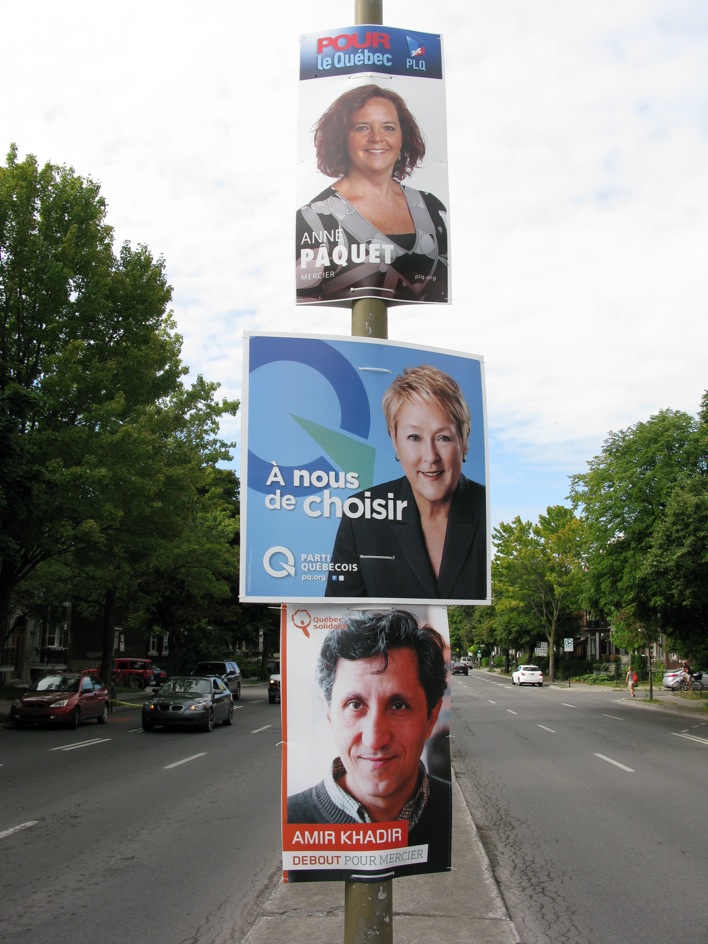 In the federal election of May 2011 Montreal’s political geography was rewritten as the orange wave knocked out long established incumbents from Pointe-aux-Trembles to Pierrefonds. In January of this year I wrote a piece in which I wondered if such a situation could be repeated at the provincial level. At that point in time the Coalition Avenir Québec was riding high in the polls with around 40% of voting intentions, enough to win a landslide and usher in a political paradigm shift. However these numbers weren’t sustained and the CAQ’a polling numbers dropped precipitously.

Now that the campaign has gotten started the CAQ has managed to improve its numbers and is now polling around 25%. Likewise, Québec Solidaire seems set to win significantly more votes than last time around, but a true breakthough continues to be elusive. As a result, what had been shaping up to be a more competitive race on the island will likely be more of the traditional political trench warefare.

Over the past few years, a number of websites have come into existence that attempt to produce seat projections using polls and previous elections as a baseline. Most of these sites’ formulas have proven to be largely accurate (provided the poll numbers plugged in are reliable) at predicting aggregate seat outcomes. One of the most cited is ThreeHundredEight.com, a website run by Éric Grenier. According to his  projections the outcomes on the island will be similar to previous elections; Liberal strongholds in the west and north, PQ strongholds in the east, with QS advancing on the PQ in certain central districts.  So unless there is a major change in public opinion towards the end of the campaign, it seems that there will be no paradigm shift in the works. 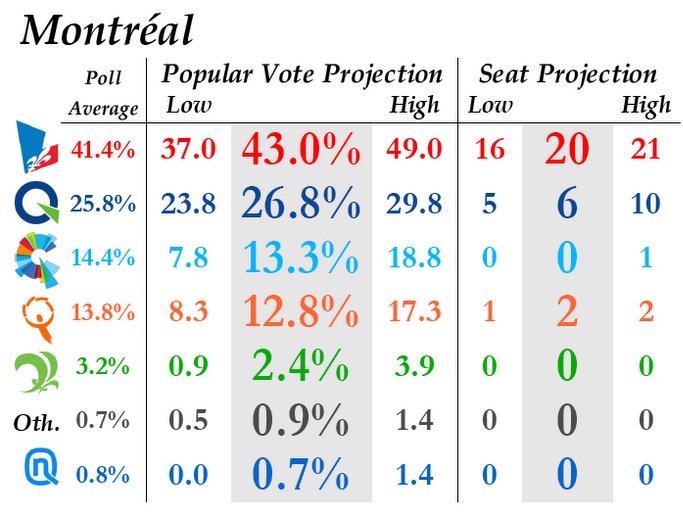 That said, the island of Montreal will still probably see some more interesting races than has been the case for some time. Most important is the presence of QS. According to Éric Grenier they’ll have difficulty electing more than their two spokespersons, Amir Khadir and Françoise David, as long as they aren’t able to break the 10% mark nationally. While they’re having trouble getting there, they could still be a factor in a few key central ridings.  Anecdotally, part of their difficulty in gaining traction in the polls is likely due to some of their soft supporters drifting back to the PQ out of a desire to vote strategically to ensure a defeat for the Liberals. That said, QS is making inroads in certain “orange line” central neighbourhoods and if they run a good campaign on the ground and  manage to convince voters that they can win locally, there could be surprises. And Françoise David’s widely appreciated performance at Sunday’s debate could also boost the party’s chances of winning a third seat.

And second, the CAQ finally seems to be making inroads amongst non-francophones, with  a recent poll putting them at 20% amongst this demographic in which the PLQ has for decades had a total lock hold. The Liberals are weaker than ever and many Anglos seems to be considering other options for the first time in a while. But short of a total collapse in their vote, this will generally just mean reduced liberal majorities in the west-end. Short of a major shift at the end of the campaign Montreal won’t end up with any CAQ MNAs.  But if a significant part of the Liberal base abandons the party and votes for the CAQ, or the Greens, or the new centrist federalist party the Quebec Citizens’ Union or abstains, it could throw a few normally safe liberal seats into play. And be the final nail in the coffin of the PLQ’s hopes for reelection.

However, as this campaign develops it seems more likely than not that it will be won where most elections in recent history are won: in the off-island suburbs and the Quebec City region. Unfortunately for Montrealers this is something that has already shown though in the discourse, promises, and leaders’ visits during the campaign. The PQ has had to make a bit more of an effort in Montreal to fight off QS, but by and large most of the party leaders are speaking to the suburbs. And at the debates, hardly a peep about Montreal. So despite a few interesting races, unless there is a major shake-up in the coming weeks, Montreal will likely continue to be an after though in provincial politics.

Next week: the parties’ promises for Montreal.