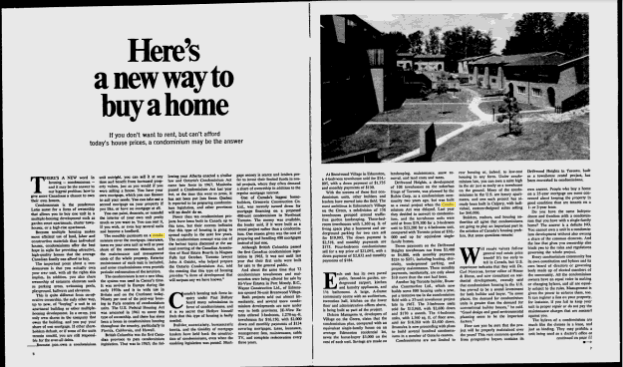 “Condominium is the ponderous Latin name for a form of ownership that allows you to buy one unit in a multiple housing development such as garden court apartments, cluster townhouses, or a high-rise apartment…

Fewer than ten condominium projects have been built in Canada up to this time, but their success indicates that this type of housing is going to spread rapidly in the next few years.”

Feb 15th, 1969: the Montreal Gazette’s Homes section devoted a 2-page spread to a new trend in real estate development. At the time, Quebec was preparing legislation to open up the market of condominiums, or “co-propriété divise“, which would be enacted later that year. The concept of owning space – but not land – was not previously recognized under civil or common law.

I doubt that anything has shaped Montreal’s urban landscape and character in the past 40 years more than the proliferation of condominiums.

While the condominium is technically a mode of property tenure, the idea of the “condo” has the power to spark visceral, often contradictory reactions: for some it represents a rite-of-passage, a proud first foray into home ownership, and a way to set down roots in the city; for others condo is synonymous with luxury, or with density; and for many more, the condo is the emblem of gentrification and symbolizes a struggle against profit-driven development and the suppression of the working-class.

This November, Groupe conseil Avenue 8 will be animating a 2-part activity in which we delve into the meaning of condominiums in Montreal – both concrete and imagined. This activity is part of the Canadian Centre for Architecture’s ABC : MTL event.

November 9: Research activity in the CCA library: we will dig through the archives for articles, advertisements, photos and plans to draw a more complete picture of the condo’s place in Montreal (by invitation – drop a comment if you’d like to take part)