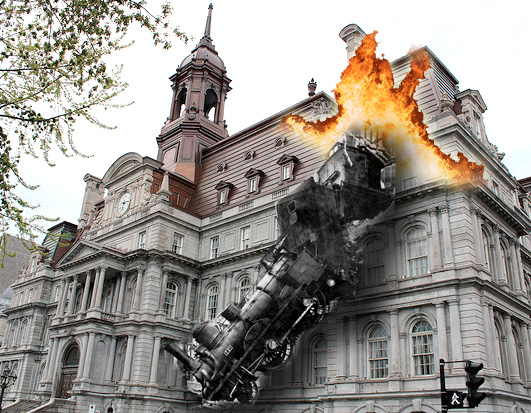 After watching what amounts to a slow-motion train-wreck between City Hall and the Charbonneau Commission on corruption, it’s little surprise to see Union Montreal representatives fleeing the smoking ruins of the party in droves.

Ten council members broke ties with the party yesterday, and Union Montréal has been reduced to a minority at city hall.

The new mayor of Montreal, Michael Appelbaum, was chairman of Gérald Tremblay‘s hand-picked executive committee until this week. He defected from Union Montreal after the party passed over his candidacy for interim mayor and will sit as an independent.

I wouldn’t be surprised if Union Montreal – the municipal party born in 2001 to contest/sugar-coat the forced municipal merger – disappeared from the political map next year. But that just means that many of Union Montreal’s reps will likely be shuffled back into the deck, only to come up under a different banner in the coming election.

In a 2010 post about longevity in Municipal politics my colleague Devin Alfaro concluded that the councillors who’ve stuck it out at city hall the longest are “people who know how to reinvent and recycle themselves as the political landscape changes.” Marvin Rotrand, Montreal’s longest-standing city councillor who is currently serving his 8th term at city hall, was among those abandoned Union Montreal yesterday.

Our new mayor Michael Appelbaum, incidentally, was originally one of two councillors elected with Parti des Montréalais in 1994, a Rob-Ford-esque party which dissolved two years later. Prior to going into politics, Appelbaum worked in real estate.

Do municipal parties open the door to corruption?

I don’t mean to imply that any of the aforementioned council members were personally guilty of corruption or collusion. But clearly they took advantage of associating with a party whose coffers were literally overflowing with the “unofficial funding” (budget officieux) that allowed Union Montréal to surreptitiously triple their election campaign budget.

I’m the first to admit naivety when it comes to the back-end of the political machine, but it seems to me that parties in the municipal arena could act as magnets for corruption. Those who want favours from City Hall can pour their pots-de–vin into a single pot to buy a majority of votes. Could dozens of independent counsellors be won over so thoroughly? Could an independent mayor adopt the see-no-evil-speak-no-evil modus operandi that allowed Tremblay to profess his innocence of his party’s dubious funding right up to the bitter end?

Municipal parties are unique to Montreal, born with the Civic Action League in 1954 which was formed to help elect Jean Drapeau (thanks to Montreal City Weblog for digging up this tidbit).

Now that we have our first “independent” mayor in over 50 years, it might be worth taking a step back to question the true impact of party-politics at the municipal level.

The main lesson that I’ve been able to draw from the train-wreck of the past few months, is that voters need to stop focusing on the train – which is likely to wind up in the scrapyard before the year is out – and to start paying more attention to the survivors.