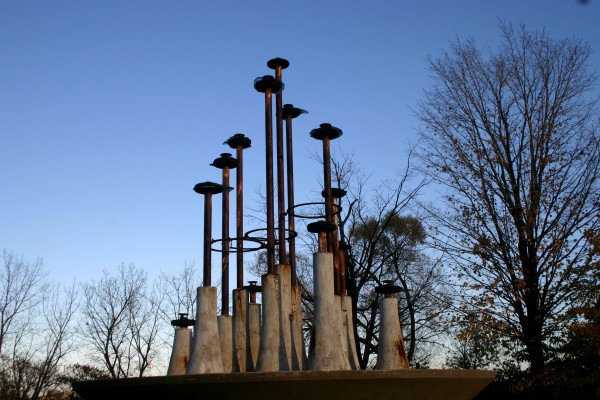 Heritage Montréal recently released their 2013 list of 10 most threatened heritage sites in Montreal, among them Place des Nations, once the heart of the ceremonies and cultural spectacles of Expo-67.

Given that Expo 67 thoroughly transformed Montreal’s landscape — it brought us the metro, raised new islands from the river, laid down much of the highway system, and swept away entire neighbourhoods — it’s surprising just how few traces of the world fair remain on the Expo grounds themselves. A while ago, I went over to Ile Ste Hélène to scout these remnants for a “Lost Architecture” piece that ran in Spacing magazine, which I will republish here on the blog on this occasion.

The event that propelled Montreal into modernity and the global spotlight erected 113 pavilions on Île Notre-Dame, Île Sainte-Hélène, and the Cité du Havre. Of these, only four or five have been re-purposed — most notably, Habitat 67 as condos, Buckminster Fuller’s geodesic dome as the Biosphere, and the French pavilion as the casino. The monumental space-frame polygons, designed to host exhibits with names like “Progress” and “Man in Control,” lacked the adaptability of more functional architecture. Those pavilions that were not spirited back to their home countries were razed to make way for the next city-defining project, the 1976 Olympics, or simply left to deteriorate.

Today, the jumbled steps and stands of Place des Nations, like many ruins of lost civilizations, evoke a grand arena where archaic ceremonies were once performed. The Expo-67 grounds have mostly returned to nature, but visitors will occasionally stumble upon a concrete fragment with a distinctly sci-fi geometry, or a lone artifact, obscure of meaning yet baffling in scale alone.

In 2013, perhaps nothing portrays the 1967 ideal of Man and His World quite so fittingly as these ruins of a brazen future that was not designed to last. Place des Nations: the ruins of a ceremonial space. November 2011